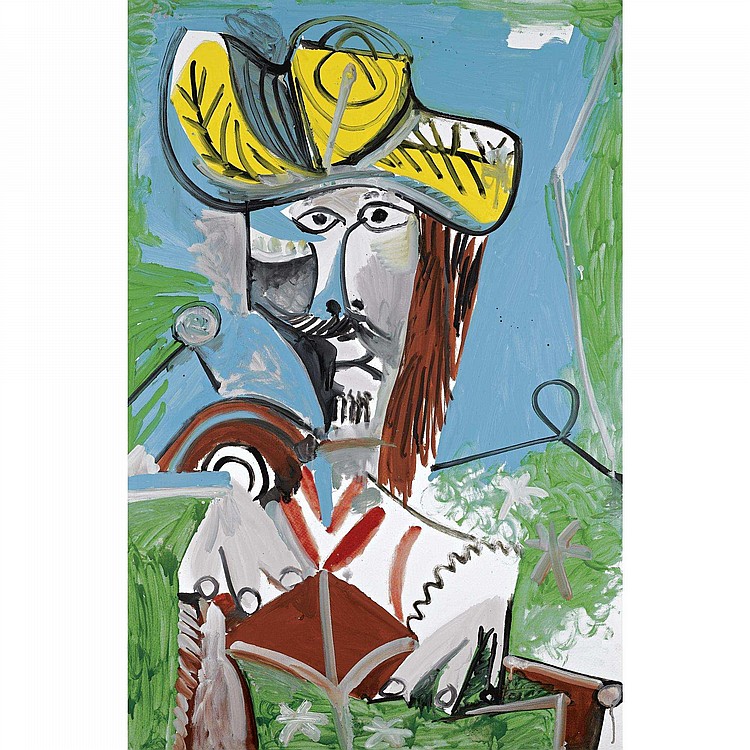 Acquired from the above by the present owner

In October 1969, Picasso executed several canvases on the theme of a man seated in an armchair, with the characteristic yellow hat, and the present larger-than-life oil is the most monumental of the group. The last twenty years of Picasso's art were dominated by archetypal images, such as a seated man, a female nude, a musketeer and a painter, and the male figure, as has often been pointed out, always carried a strong autobiographical reference. This cast of characters were for the artist a means of projecting different aspects of his own identity. These portraits that populated Picasso's personal mythology were part of a late flowering, a final synthesis which merged his personal history with the cultural heritage of the Western artistic tradition, and developed a direct and spontaneous style that celebrated the act of artistic creation. In choosing the iconography shared by old master painters such as Rembrandt and Velázquez, Picasso is, at the end of his career, consciously aligning himself with the greatest artists of the Western canon.

Marie-Laure Bernadac wrote about this subject in Picasso's late work: "Picasso paints a gallery of portraits of men who are seen 'in majesty,' writing or smoking. With their bearded, elongated faces, their huge questioning eyes, their long hair with or without a hat, these 'Heads' represent one last concession on the painter's part to the 'all-too-human'. By contract with the musketeers ? who all have the same face ? these are true portraits, strongly characterized and individual. One looks like a hippie, another like a prophet or perhaps an evangelist [...]. Picasso's confrontation with the human face, which makes him into the great portrait-painter of the twentieth century, brings him back to a confrontation with himself, the painter, young or old" (M.-L. Bernadac, 'Picasso 1953-1972: Painting as Model,' in Late Picasso (exhibition catalogue), The Tate Gallery, London, 1988, pp. 82-83).

"I have less and less time and I have more and more to say" commented Picasso in his last decade (quoted in K. Gallwitz, Picasso Laureatus, Lausanne & Paris, 1971, p. 166). The freedom and spontaneity of his late work, together with the recourse of archetypical figures and symbols, reflect both a growing awareness of his mortality, as the artist sought to ward off death through a final burst of creativity, as well as a conscious decision to allow himself total liberty with both style and subject matter. Having gone through so many phases of stylistic and technical experimentation, Picasso now pared down his style in order to paint monumental works in quick, spontaneous brush-strokes. Rather than ponder the details of human anatomy and perspective, the artist isolated those elements of his subject that fascinated and preoccupied him, and depicted them with a contemporary style and a sense of wit entirely of his own.

The recent exhibitions Picasso et les maîtres at the Grand Palais in Paris, and Picasso: Challenging the Past at the National Gallery in London, are part of an ongoing reassessment of Picasso's late ?uvre, and the works of his last twenty years are increasingly seen as a fitting culmination to the career of arguably the twentieth century's greatest artist. These late portraits actually represent a psychological projection of a complex and multifaceted identity, illustrating the unruly amalgam of influences and contrary personas that made up the mental backdrop of this protean artist. As Simonetta Fraquelli commented in the London exhibition catalogue, "In an era when non-figurative art prevailing over figurative art and a linear progression of 'style' was considered more relevant than emotion and subject, it was customary for many younger artists and art critics to think of late Picasso as lesser Picasso. However, the extensive re-evaluation of his late work since his death has highlighted its undiminished power and originality. His capacity for emotional depth and painterly freedom in his late painting, together with his wide-ranging engagement with the imagery of the great paintings of the past, was to have a lasting influence on the development of neo-expressionist art from the early 1980s onwards" (S. Fraquelli, 'Looking at the Past to Defy the Present: Picasso's Painting 1946-1973', in Picasso: Challenging the Past (exhibition catalogue), National Gallery, London, 2009, p. 146).

During the month that Buste d'homme was painted, that Yvonne and Christian Zervos visited Picasso at his home in Mougins, in the South of France. Fascinated by the energy and richness of his artistic output at the time, they decided to stage an exhibition of Picasso's recent work at the Palais des Papes in Avignon. Yvonne died only several months later, and Christian Zervos continued working on the exhibition for which he wrote the catalogue preface, that opened in May 1970. Buste d'homme was one of the handful of exhibited canvases executed in this largest format, and certainly commanded a great presence in the majestic surroundings of the Avignon palace.

A year after the exhibition took place, Klaus Gallwitz already recognized the brilliance and inventiveness displayed by these pictures: "In the summer of 1970 the Palace of the Popes in Avignon was invaded by an assemblage such as it has never seen before, which took over the walls of the Gothic chapel, filling the vast warm space with its presence. The new tenants were 165 paintings, hung in rows, two- or sometimes three-deep, like tiers of balconies. Their figures were cupid with musketeers, musketeers with pipes, men sitting in chairs, reclining women, wreathed heads, painters with children, embracing couples, Pierrot and Harlequin, women in chairs and women with a bird, and finallya man with a golden helmet. [...] The bewildering multiplicity of figures reveals an imagination of almost oriental richness. The constantly changing pageant, the repetition or modification of types of painting or themes, is dictated by the ingenious yet apparently quite natural 'stage management' of chance, whose signature we recognize in fairytales. Every episode and every character is given a symbolic value which reveals that Picasso is as much magician as poet" (K. Gallwitz, Picasso at 90: The Late Work, London, 1971, pp. 183 & 188).