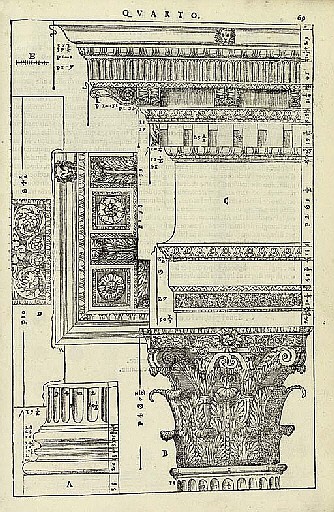 PALLADIO, Andrea (1508-80). I Quattro Libri dell'Architettura , [edited by Silla Palladio]. Venice: Bartolomeo Carampello, 1581. 4 parts in one volume, 2° (305 x 204mm). Title and part-titles with woodcut allegorical border incorporating Franceschi's 'Regina virtus' device [ vide infra ]. 221 woodcut illustrations, plans and sections [RIBA count], many full-page, [?by Giovanni and Cristoforo Chrieger, Cristoforo Coriolano, et al.] after Andrea Palladio. Woodcut printer's device on colophon. Woodcut initials. Retaining blanks 2k4 and 4R4. (Occasional light marking, variable light browning, A1-2 slightly soiled on lower edges.) 17th-century semi-flexible vellum, titled in manuscript on the spine, overlaid paper lettering-piece (marked and a little cockled, extremities chipped, cracking on joints, spine worn with partial loss, recased, final blank laid down onto new endpapers). Provenance : 'Registro' (early inscription on margin of title). Second edition. Palladio's Architettura was first published by Domenico de' Franceschi in 1570, containing four books, and, although Palladio promised further books in the first edition, no more had appeared by the time of his death on 19 August 1580. This second edition was then seen through the press by his son Silla, and it follows the first edition very closely: the text has been reset (repeating two mispaginations found in the first edition) and new woodcuts have been used for the initials and ornaments, but the title-borders and illustrations were printed from the original blocks. Although the publisher's name is stated as Carampello, de' Franceschi's device is retained in the title-borders and repeated on the colophon; it has been suggested that either Carampello had acquired the woodblocks from de' Franceschi, or that Carampello shared an address with the heirs of de' Franceschi (who died in 1575) and that it was printed for him by Francesco de' Franceschi. Adams P-101; Berlin Kat. 2594; Cicognara 595; Fowler 213; RIBA 2384.