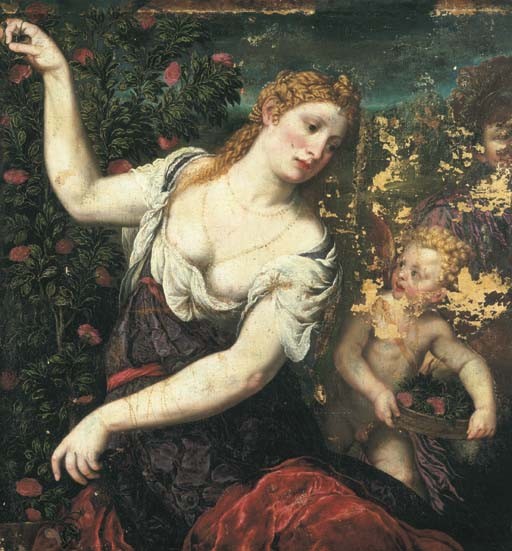 Paris Bordone was born in Treviso but received his training in Venice, where he was registered as an independent artist in 1518. Although his master has never been identified, Bordone's early works show the influence of Giorgione's motifs and sentiments and of Titian's brilliant intensity of palette. In the mid-1520s, Bordone worked in the Lombard town of Crema, and his work assumed a pronounced Pordononesque cast. Around 1538 he traveled to the court of Francis I at Fontainbleau, and two years later he was invited to the Imperial Court at Augsburg, where, according to Vasari, he painted many works for the Fuggers. He may have been in France again around 1559, but he had returned to Venice by 1565, when Vasari referred to him as one of the most renowned artists of his day.

Although well-known for his portraits, Bordone also painted numerous mythological and allegorical subjects in a highly refined Mannerist mode throughout the 1540s and 1550s. These were extremely popular among his wealthy, worldly patrons, and constitute a significant part of his oeuvre.

The present painting is a fragment of a larger composition that originally included Venus, Cupid, Bacchus and Diana. Another version, which shows the image in its entirety, was formerly in the Achillito Chiesa collection in Milan (sold in New York, 27 November 1927; see S. Béguin, 'Paris Bordone in France' in Paris Bordone e il suo tempo, 1985, p. 13, fig. 7). In 1570, the wealthy German merchant Willibald Imhoff of Nuremberg is known to have owned 'una grande tavola...con Bacco, Diana e Venere, dipinta in Venezia da Paris Bordone' (C. van Holst, 'La pittura veneziana tra il Reno e le Neva,' Arte Veneta 5, 1951, p. 131). Unless the designation 'tavola' is erroneous, however, Imhoff's picture must have been yet a third version of the subject, since the Chiesa painting and the present work are executed on canvas.