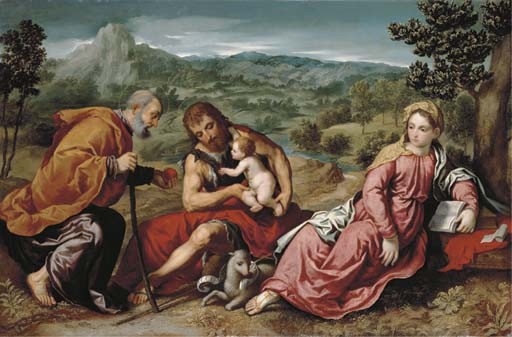 (Possibly) Gian Vincenzo Imperiale, Procurator and Admiral of Genoa (c. 1582-1648), Palazzo di Campetto, Genoa, recorded in his 1648 posthumous Inventario de' quadri della casa de Genova stimati [in] scuti d'argento, p. 234, no. 61, 'Madonna con Santo Gio. Batta di etta di anni 33', by whom bequeathed to
Francesco Maria Imperiale (c. 1606-1678).
Queen Christina of Sweden (1627-1689), Palazzo Riario, Rome and by whom bequeathed in 1689 with the rest of her collection to
Cardinal Decio Azzolino (d. 1689), by whom bequeathed to his nephew
Marchese Pompeo Azzolino (d. 1696), by whom sold en bloc to
Principe Livio Odescalchi, Duca di Bracciano (d. 1713), and then by inheritance with the collection to
Principe Baldassare Odescalchi-Erba (d. 1746), by whom sold in 1721 with the whole of Queen Christina's collection through Pierre Crozat to
Philippe II, duc d'Orléans, Regent of France (1715-1723), and by descent to
Louis Philippe Joseph, duc d'Orléans, called Philippe Egalité (1747-1793), by whom sold with the other Italian and French pictures from the Orl©ans collection in 1791 to vicomte Edouard de Walkuers on behalf of
François Louis Joseph de Laborde Méréville, by whom brought to England, consigned with Jeremiah Harman and in turn sold en bloc to Michael Bryan on behalf of a consortium consisting of
Francis Egerton, 3rd Duke of Bridgewater (1736-1803), his nephew George Granville Leveson-Gower, Earl Gower, subsequently 2nd Marquis of Stafford and 1st Duke of Sutherland (1758-1833), and Frederick Howard, 5th Earl of Carlisle (1748-1825), by whom exhibited as a group at Michael Bryan's Pall Mall Gallery and the Lyceum, The Strand, 1798, as Giorgone, and retained by the Duke of Bridgewater, Cleveland House, St. James's, London, by whom bequeathed in life interest to his nephew and consortium-partner, Earl Gower, with reversion to the latter's second son
Lord Francis Leveson-Gower, subsequently Egerton, created 1st Earl of Ellesmere (1800-1857), who rebuilt Cleveland House as Bridgewater House, and by descent until sold by order of the Trustees of the Ellesmere 1939 Settlement; Christie's, London, 2 July 1976, lot 82.
Anonymous sale; Christie's, New York, 26 May 2000, lot 76, where purchased by the present owner.

The present work is one of the Sacre Conversazioni painted by the Venetian master, Paris Bordone. As Giordana Mariani Canova (loc. cit., 1964) notes, 'vanta un'illustre storia collezionistica degna della sua qualità'. Its documented history begins in the distinguished collection of Queen Christina of Sweden and it may have been among the works seized from the collection of Emperor Rudolph II in Prague, when Swedish troops looted the city in 1648. Arriving in Rome in 1655 following her abdication from the Swedish throne and subsequent conversion to Catholicism, Christina assembled one of the most important collections of art in Rome with the guidance of Cardinal Decio Azzolino who had been appointed to assist her by Pope Alexander VII. Her residence, the Palazzo Riario on the Via della Lungara (now partly integrated into the Palazzo Corsini), became a veritable private museum, finally displaying about 270 paintings. Among these were Titian's Death of Actaeon (National Gallery, London), six large Allegories by Veronese (four in the National Gallery, London and two in the Frick Collection, New York), Correggio's Leda (Gemäldegalerie, Berlin) and several predelle by Raphael (National Gallery, London; Dulwich Picture Gallery, London; Isabella Stewart Gardner Museum, Boston; and the Metropolitan Museum of Art, New York). After her death in April 1689, her collections - which had been bequeathed to Azzolino, who himself died only three months later - were sold to Livio Odescalchi, duca di Bracciano. About 260 pictures were acquired by Philippe II, duc d'Orléans, eleven years after Odescalchi's death in 1713.

The present painting was attributed to Pordenone in the 17th century and to Giorgione in the 18th century, being offered as such in the Orléans sale of 1798-99, although it had been already recognized as the work of Paris Bordone by Dubois de Saint-Gelais, (loc. cit.). The attribution to Bordone was re-established at the beginning of the 19th century and has never since been questioned.

Although the attribution is now secure, the date of execution has been the subject of some debate. The chronology of the artist's oeuvre is by no means clear, and dating the painting on stylistic grounds is confounded by the wide range of sources on which Bordone drew, depending on the patron. Canova (loc. cit., 1964) dated it to circa 1545-1555, and then in the catalogue of the 1984 Treviso exhibition (loc. cit.) proposed a more precise dating to 1545-1550. More recently, however, in a private verbal communication to the present owner, Dr. Bernard Aikema has suggested that the work dates from earlier in Bordone's career, around 1525.

With the above caveat concerning the chronology of the artist's oeuvre, the dating of the present work to the late 1540s can, however, be cautiously defended. The practice of setting religious scenes in an extensive landscape found great popularity among Venetian artists from Giorgione and Titian onwards, and Bordone was no exception - a number of such works by the artists are known and can be used to establish some form of chronology. Several compositions of this type can be grouped together according to a common mood that pervades them, a certain serenity and intimacy conveyed principally through the soft lighting and carefully designed arcadian landscapes into which the figures are set and, to a lesser degree, by the relative stillness and composure of the protagonists themselves. These include The Holy Family with Saints Jerome and Catherine (Palazzo Rosso, Genoa) and The Rest on the Flight into Egypt (previously in the collection of Captain E.G.S. Churchill, Northwick Park). As such they show the influence of works from the 1520s by Bordone's first master, Titian, and have thus been dated by Canova to the latter part of that decade (op. cit., p. 101 and fig. 25; and p. 109, fig. 26 respectively).

In the present composition, however, there is a less idyllic representation of nature. Instead the figures are set before a wilder and less hospitable landscape that extends far into the distance. A similar treatment of the landscape can be found in other works of the 1540s, such as The Baptism of Christ (Brera, Milan, dated by Canova to 1542-47, ibid., p. 106) and the large altarpiece, The Holy Family with Saint Jerome, in the Church of San Celso, Milan (dated by Canova to 1548-51, in the exhibition catalogue, Paris Bordone, Milan, 1984, pp. 22-3 and illustrated pp. 17 and 20). This suggests that the present work should be dated similarly. Indeed it has much in common with the Milan altarpiece: there is the same brilliance and richness of palette and a comparable robustness in the figures, both of which stand in contrast to the more muted tones and smaller figures found in the works from the 1520s mentioned above. Similar too is the increased animation of the protagonists - there is a stronger sense of movement across the composition created through the oblique postures adopted by the figures as they lean towards or fall back from each other and in so doing create a rather artificial rhythm that is typically Mannerist. The monumentality and exaggerated musculature of Saint John the Baptist can be seen as anticipating Bordone's interest in the somewhat cool, courtly Mannerism of artists such as Bronzino that was to characterize the artist's depiction of the nude in the 'mythological' works of the following decade.

The figures in the present work occur elsewhere in other similar compositions by Bordone. The Madonna, for example, can also be found in an identical pose and position in The Rest on the Flight into Egypt (National Gallery of Scotland, Edinburgh), a version of which is in the Malberti collection, Desio, Italy (see V. Sgarbi, 'Note su Paris Bordon', in the 1984 exhibition catalogue, p. 172, fig. 4). There is also a Holy Family in the Muzuel Brukenthal, Sibiu, dated by Canova (op. cit., p. 112) to 1555-65, which repeats the composition of the present work but in reverse and with some slight variations (see the exhibition catalogue, Da Antonella da Messina a Rembrandt, Museo della Permanente, Milan, 1996-97, pp. 30-1, illustrated). Of all these related works, however, it is in the present composition that the figures are most successfully integrated into the landscape. This is, in part, due to the prominence that Bordone gives the latter, and the consequent reduction in scale of the figures in relation to it. It can also be explained by the artist's handling and treatment of the landscape itself. More summarily painted and dramatically lit than in earlier works, its vast, open vista - punctuated with a solitary, craggy peak - conveys the slightly unsettling, almost 'Romantic', sense of nature as something untamed and unbounded. In its subtle depiction of the inter-relationship between man and nature, the present composition may thus be considered among the most accomplished of the artist's achievements.

A copy of this picture by David Teniers the Younger is in the Methuen collection at Corsham Court.