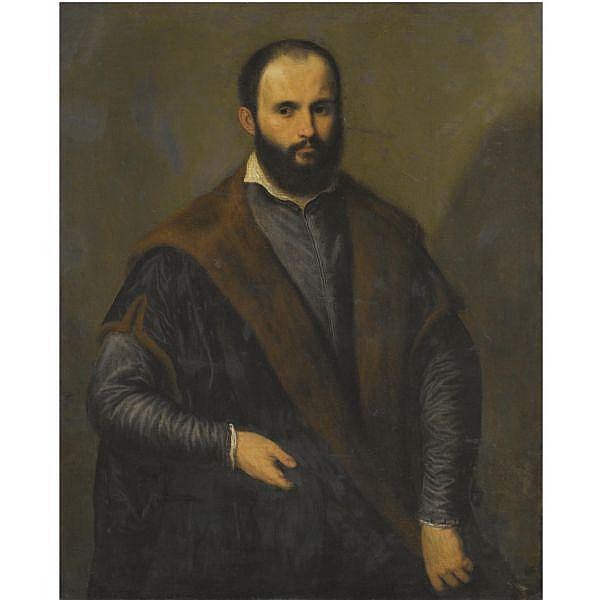 remains of an inscription lower right: AETATIS / ANNO / ...III oil on canvas, in a carved and gilt wood frame

PROPERTY FORMERLY IN THE COLLECTION OF JAKOB AND ROSA OPPENHEIMER
Initially the young Bordone trained under Titian but by 1518 he was already registered as an independent master, apparently having been eased out of Titian's workshop due to the latter's distrust of a student who could imitate his style with such skill. He was much sought after outside of Italy, especially by the royalty of France, both for his religious paintings and for his portraits, especially those of women.υ1

The present work belongs to Bordone's later phase, in which he had perhaps lost some of his more youthful vigour and spontaneity. At the time of the Van Diemen sale in 1935 the catalogue entry states that the inscription lower right read: AETATIS /ANNO / XXXIII and that the work was signed and dated lower left: O.P.B. 1561. A note on the Provenance:
This late portrait by Bordone was until recently with the Netherlands Art Property Collection and has now been restituted to the heirs of Jakob and Rosa Oppenheimer. The Oppenheimers were the owners of the well-known Galerie Van Diemen & Co. in Berlin (see Provenance). In 1933, they escaped Germany after Adolf Hitler had become Chancellor, and made for France, where Jakob died in 1941. Rosa was deported to her death at Auschwitz in 1943. Their three children survived the Second World War.