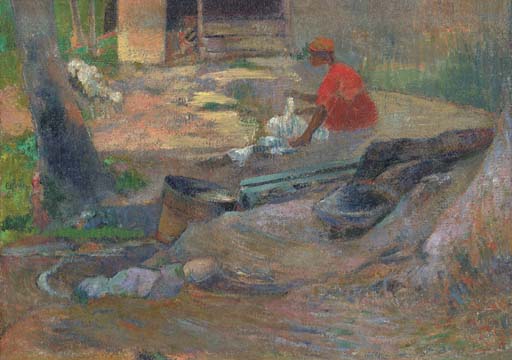 'I had a decisive experience in Martinique. It was only there that I felt like my real self, and one must look for me in the works I brought back from there rather than those from Brittany, if one want to know who I am' (Gauguin, letter to Charles Morice, 1890, quoted in C. Ives et al., The Lure of the Exotic: Gauguin in New York Collections, exh.cat., New York, 2002, p. 45).

So wrote Gauguin three years after his historic trip to Martinique, expressing the importance of that adventure to his work. His voyage to Martinique, and the experiences of life in an island Paradise, were to have great repercussions on the life and art of Gauguin, and paved the way for his later journeys to Tahiti and the Marquesas. Painted during his 1887 visit to Martinique, La petite laveuse is an intimate work on a small scale that reveals the artist's fascination for the sights and people of this island paradise. The woman is shown washing clothes by a bucket, an everyday scene that is filled with the lush exoticism of the Caribbean. In Daniel Wildenstein's recent catalogue raisonné of Gauguin's works from before 1888, only sixteen oils from this seminal Martinique period are recorded, of which almost half are in museums such as the Ny Carlsberg Glyptotek in Copenhagen, the Neue Pinakothek ub Munich, the Scottish National Gallery in Edinburgh, and the Van Gogh Museum in Amsterdam, which possesses two. La petite laveuse is therefore an extremely rare window into what was, by the artist's own admission, one of the most important and formative periods of his entire career.
Gauguin travelled to Martinique with his friend and fellow artist, Charles Laval, whom he had met in Pont-Aven the previous year. Laval was younger than Gauguin, and held him in some awe, essentially becoming his first ever disciple. Tall and thin, and ever on the brink of illness, Laval provided an intriguing contrast to his older master. At the same time, Gauguin, who knew that his reputation as an artist was growing day by day, enjoyed having a disciple of his own. This heralded a new maturity and strength in his painting. Gauguin had felt stifled by life in France, even in Brittany, and therefore decided to leave, to 'live as a savage... I am taking my colours and my brushes and I shall reimmerse myself far from all men' (letter XLVIII, P. Gauguin, Lettres de Gauguin à sa femme et à ses amis, ed. M. Malingue, Paris, 1946, p. 101).
In Martinique, able at last to free himself (to an extent) from financial worries and to live as a 'savage', Gauguin created his earliest exotic masterpieces, paintings that sing with lush and intense colour, yet bear a distinctive compositional harmony. In La petite laveuse, this is shown in the union of ardent oils with a poised and tranquil scene reminiscent of Pieter de Hooch's paintings. The extent to which Gauguin sought to capture this balanced composition is clear in two surviving studies, each on either side of the same sheet, which show the artist drawing two washerwomen, one of whom has been slightly altered before being committed to oil, and on the reverse a Cézanne-like watercolour of the pail.
The small island provided a wealth of subject matter for Gauguin, who was especially enchanted by the women there. Indeed, almost all of the paintings that he executed in Martinique feature Martiniquaises in various positions of labour or repose.
Gauguin's journey in search of the exotic with Laval had in fact been intended as a trip to Panama, but that stage of the journey had been met by disaster after disaster. Gauguin had intended to profit from the generosity of his brother-in-law there, but this plan proved flawed. Instead, the artist found himself working on the excavation of the Panama Canal. Even this was to prove abortive, and after a fortnight he was relieved of his position. At the same time, Laval, who was unhealthy at the best of times, had been struck down with fever. Martinique, and the cheap and pressure-less existence that the artists were to enjoy there, seemed like Paradise in comparison to the hardships they had recently endured. This relief fills Gauguin's pictures from the period an shows itself in the joyous colours that would remain central to his paintings for the rest of his career. Gone is the modified Impressionist influence of Pissarro and Cézanne, replaced instead by a new and original understanding of the possibilities of colour, showing the exciting early stages of his Symbolist style already in evidence. This painting therefore marks the dawn of the exotic in Gauguin's work, the dawn of what was to become his hallmark style, and the first real step in the legend that was to become his life.
In the Wildenstein catalogue raisonné, reference is made to an old photograph showing La petite laveuse that was in Jeanne Schuffenecker's collection, leading to the conclusion that the work was itself in the collection of her uncle Amédée, the brother of Gauguin's friend the painter Emile, one of the original members of the School of Pont-Aven, who was so instrumental in organising the landmark Café Volpini exhibition of Synthetist and Impressionist painting in 1889, to which both Gauguin and Laval would contribute. It was from Emile Schuffenecker's collection that Amédée purchased many of the Gauguin works that he owned, meaning that this painting may itself have formerly belonged to his prestigious Pont-Aven colleague. Letters and documents now in the archives of the Svensk-Franska Konstgalleriat show that this work later passed through the hands of Druet, to whom it is known that Amédée sold several works. The work appears from these letters to have belonged to Druet the only time that it was ever exhibited publicly, in 1918.