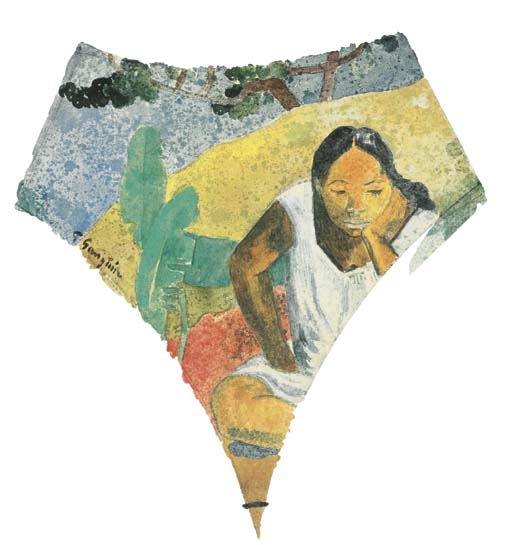 Acquired by the family of the present owner circa 1950.

PROPERTY FROM A PRIVATE PARISIAN COLLECTOR

Gauguin based the seated young woman in this watercolour on the pensive figure he depicted in his oil painting Te faaturama (also known as La boudeuse or Le silence, W 440, Worcester Art Museum, Massachussetts, fig. 1), which he executed in Tahiti and dated '(18)91'. The painting was one of eight that Gauguin shipped to Daniel de Monfreid in December 1892, so it was already in Paris in advance of his return from Tahiti in September 1893. He included the painting in his homecoming exhibition at Durand-Ruel in November. Of the forty-one paintings he showed, it was one of only eleven that he sold - Edgar Degas acquired it along with a second picture, which Gauguin took as a significant sign of recognition from a highly critical fellow artist whom he greatly admired.

Gauguin's model was presumably his adolescent native companion Tehamana. He gave great care to the rendering of her figure, drawing a full-scale pastel in preparation for the painting (illustrated in the exhibition catalogue, Paul Gauguin, Haus der Kunst, Munich, 1960, no. 123, pl. 47). He used this figure once again in the painting Rue de Tahiti (W 441; Toledo Museum of Art, Ohio). The contemplative pose seemed emblematic of the slower, non-Western pace of his new surroundings, and hinted at a mysterious dimension in the life of its indigenous inhabitants. Gauguin wrote his wife Mette in July 1891, 20 days after his arrival in Tahiti: 'Nothing but this silence! I understand why these people can remain hours and days sitting immobile and gazing sadly at the sky. I apprehend all the things that are going to invade my being and feel mostly amazingly at peace at this moment. It seems to me as if the turmoil of Europe exists no longer, and tomorrow it will be the same, and so on until the end' (M. Malingue (ed.), Paul Gauguin: Letters to his Wife and Friends, Paris, 1946, letter 126, p. 163).

The present watercolour was probably done in France during the twenty-two months between September 1893 and July 1895 that Gauguin spent there before returning permanently to the South Seas. He substituted here a landscape background for the Tahitian interior seen in the oil painting. For the background, he employed a watercolour transfer technique that he devised after his return to France, which he came to prefer over the normal application of watercolour. It was an effective means of creating varied and lively surfaces that would enhance the flat-colour zones which were the foundation of his radical, modernist compositions.

The shape of this watercolour is unusual and somewhat puzzling, until one visualises it set as a spandrel between two medieval-style pointed arches, like those in an old country chapel. Indeed, it was in such an ogival setting, in the Trémalo Chapel near Pont-Aven, that Gauguin observed the poly-chromed wooden sculpture of Christ crucified which became the inspiration for his famous Le Christ jaune, 1889 (W 327; Albright-Knox Art Gallery, Buffalo, New York). Gauguin had attempted to gift his painting to a local pastor to have it installed in his church, but was rebuffed. One may speculate that in painting the present watercolour Gauguin may have envisioned a decorative scheme for a local chapel, in which he would commingle elements of Eastern and Western spirituality. However, it was not an idea that was likely to have met with local approval, and there is no further evidence that Gauguin pursued it. In any case, the innovative use of media and unusual format may serve to place the execution of this watercolour within the period of Gauguin's final stay in Brittany, between the end of April and mid-November 1894. Gauguin had been incapacitated for most of the summer, having fractured his leg in a fight with some local sailors. Deeply in pain, he was unable to paint on canvas, but instead worked extensively on watercolour transfers and woodcuts. He depicted both Breton and Tahitian subjects. The curving landscape contours that wrap around the figure in the present watercolour may also be seen in the woodcut Manao tupapau (Guérin, no. 36), which Gauguin executed in Brittany during the summer of 1894.


No VAT will be charged on the hammer price, but VAT at 17.5% will be added to the buyer's premium, which is invoiced on a VAT inclusive basis.