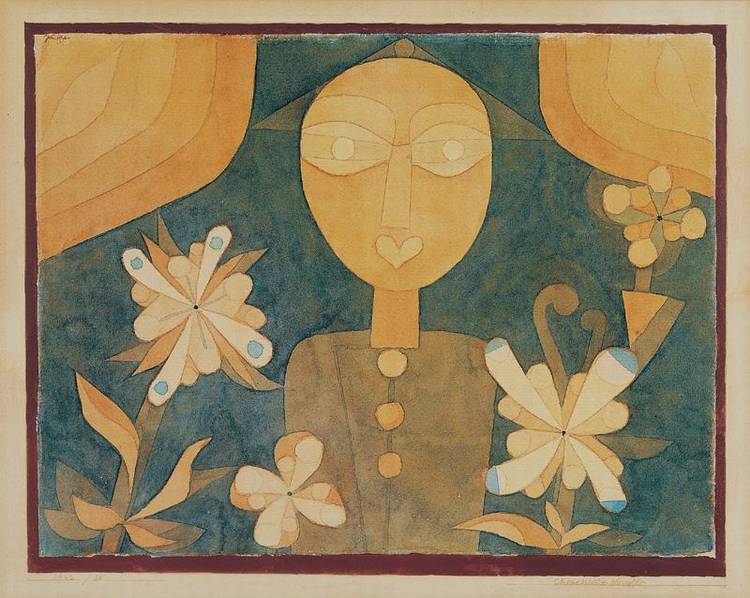 PROPERTY OF A MIDWEST COLLECTOR

In October 1920 Klee was invited by the architect Walter Gropius to teach at the Bauhaus in Weimar. He left Munich in order to take up the post in January 1921, and the move had a dramatic effect on his art. He now had access to a large studio and daily contact with other important artists such as Kandinsky and Feininger. The Bauhaus years in Weimar in the 1920s would coincide with one of Klee's greatest and most innovative periods. While the Bauhaus attracted artists, designers and architects, its activities also welcomed major composers such as Paul Hindemith and Igor Stravinsky whose music was played at various Bauhaus events. In this highly charged, intensely creative atmosphere, Klee, himself a proficient violinist, was allowed the opportunity to indulge his interest in music, theatre, and the art of exotic places. He became increasingly fascinated by fairy tales, legends, puppets and non-Western cultures, including the art, literature and mysticism of the Far East, as Chinesische Novelle demonstrates.

In 1915 Klee had executed a series of six watercolors based on Chinese poetry. In this group of works he sought an integration of poetic art and painting, in the spirit of the East. As Will Grohman observed: "The love of analogy and parable, the revelation of the fundamental oneness of all things through the metamorphosis of forms, the kaleidoscopic interplay of nature, man and eternity-all this we find in Klee as we find it in the East." (Will Grohman, Paul Klee, London, 1954, pp. 380-381)

During 1922, in tandem with his work as a teacher, Klee was attempting to redefine the nature of creativity. He impressed upon his students the need to question and reconstruct the fundamental principles of the plastic arts. In this quest the example of Chinese philosophy and art provided an essential example. Will Grohman, discussing a work of 1923, Chinesisches Porzellan (Klee Oeuvrekatalog, no. 234, 1923), considered that Klee may have been drawn to Chinese subjects because, "The Chinese have a different syntax." (Will Grohman, Paul Klee, Watercolours, Drawings, Writings, New York, 1969, p. 20) Klee was in the process of radicalizing art through his own, highly personal new syntax of expression. This included his use of transparent and layered colors. He explored the way in which movement can be expressed through color, in particular through the energy created when colors are intensified or diminished; made warmer or cooler; lighter or darker. This virtuoso manipulation of tone is especially apparent in the present watercolor. Klee described this aspect of his work in a letter to his wife dated April 14, 1921: "I am now trying to build up the tonality of my latest watercolors rigorously with two colors, no longer from pure feeling. And the drawing goes rigorously with the painted form, melodically so to speak."

While redefining the nature of his art, Klee was able to invest his works of this period with great charm and humor, as is evident in Chinesische Novelle. Jurgen Glaesemer, writing of this period, however, emphasises Klee's mystical approach to his work: "both as an artist and as a person he believed he had found a place for himself in the creative universe beyond the range of common reality - "ab ovo", at the source of all things. This primordial realm was described by him as the boundary between chaos and cosmos. In his definition, chaos is an unordered state of things, a confusion, cosmogenetic, a mythical primal condition of the world from which the ordered cosmos gradually, or suddenly takes shape by itself or by the act of a creator." (J. Glaesemer, Paul Klee, The Coloured Works in the Kunstmuseum Bern, Bern, 1976, pp. 132-3)

This work is recorded in the artist's oeuvre catalogue as number 80 for the year 1922. 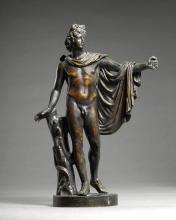 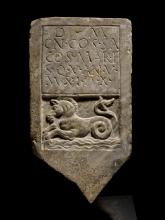 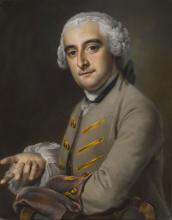 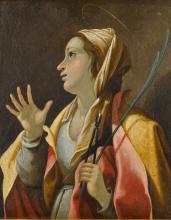