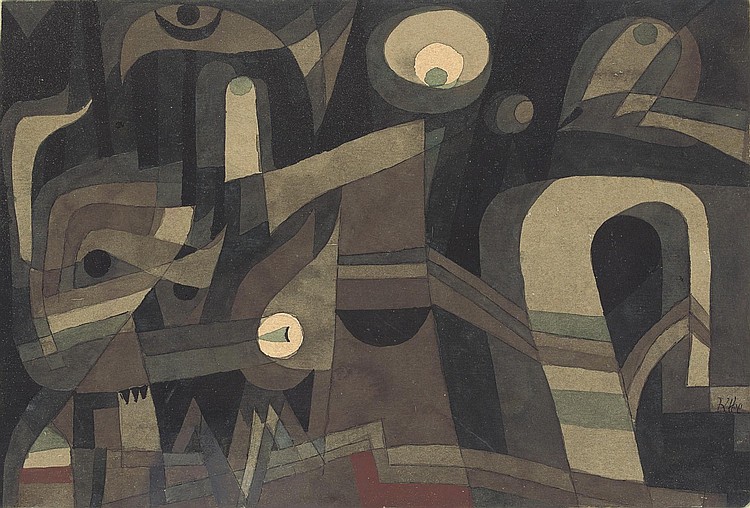 VAT rate of 5% is payable on hammer price and at 15% on the buyer's premium
This work is sold with a photo-certificate from the Paul Klee Stiftung.

Klee took up his post as professor at the Staatliche Bauhaus Weimar in January 1921, marking the beginning of a twelve year period during which he was required to divide his time and energy between teaching and his own creative work. This arrangement brought about, as Will Grohmann has pointed out, 'the necessity of clarifying in his own mind (in order to be able to explain them to his students) artistic procedures which he had hitherto adopted almost unconsciously. Klee always thought about the why and wherefore of his art. But at the Bauhaus he had to formulate a theory -- consistent, communicable, and intelligible -- concerning the use of pictorial elements' (in Paul Klee, New York, 1954, pp. 63-64).

At the Bauhaus, for the first time in his life, Klee had the use of a large studio. In this new space, and amid the diverse and stimulating disciplines to which Klee was exposed within the school's programme, the scope of his work began to expand in different directions simultaneously. Alongside his coloured line drawings, he now executed more thorough-painted sheets which often display a deeper spatial context than before, as well as more variegated and inventive forms, in which he projected a strong sense of architectural precision and clarity. While he still relied on the cubist grid that he had derived from the pre-war Fenêtres of Robert Delaunay, as seen in various colour-rectangle compositions, he was now enriching and diversifying his cubist syntax by employing more flexible and organically based forms.

These aspects of Klee's pictorial evolution are already apparent in Nachts (Grün/Indischrot, Düster), which the artist painted in the early months of his first year at the Bauhaus. The subject is a nocturnal landscape inhabited by vaguely anthropomorphic creatures, as well as other strange things of an indeterminate nature that twist and turn. There are two small light sources which can do little to illuminate the eery darkness. As he noted in the picture's subtitle, Klee has rendered his division and layering of forms in dusky tones mixed from green and Indian red, following his new technique of closely hued colour-gradation, which he was concurrently applying to striking effect in his 'fugal' compositions.

The first owner of this watercolour was Galka Emmy Scheyer (1889-1945), who met Klee through Alexej von Jawlensky, probably in late 1919, and was a frequent visitor to the Bauhaus. She became acquainted with Lyonel Feininger there in 1922, and was introduced to Wassily Kandinsky when he arrived in Weimar that same year. In order to promote and sell the work of these artists she brought them together under the name 'The Blue Four'. She traveled to the United States in 1924 to lecture and organise exhibitions on their behalf; after crossing the country she settled in San Francisco, and moved to Los Angeles in 1933. She imported numerous works by Klee and his colleagues for exhibition and sale. She last visited Europe in 1932, returning to America from Germany in May 1933, a few months after Hitler had been appointed chancellor. She brought back 250 works by Blue Four artists which otherwise might well have been destroyed during the ensuing years of the Hitler regime and the Second World War. Her personal collection, which contains 55 works by Klee, including thirteen from 1921, is today housed in the Norton Simon Museum, Pasadena, California.