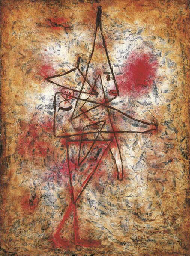 Clown mit Kind Signed 'Klee' (lower right); signed, titled and dated '1931 R8 Clown mit Kind, Klee' (on the reverse) oil on board 261/2 x 193/4in. (45.8 x 30.5cm.) Painted in 1931 PROVENANCE Galerie Alfred Flechtheim, Berlin (13328). Andr‚ LefŠvre, Paris. Anon. Sale, Paris, Palais Galliera, 25 November 1965, lot 46. Galerie Beyeler, Basel (4559). Jorge de Brito, Lisbon. Sotheby's, London, 4 December 1974, lot 44, where acquired by the present owner (œ32,000). EXHIBITION Berlin, Galerie Alfred Flechtheim, Paul Klee, 1931, no.17. Paris, Mus‚e National d'Art Moderne, Collection Andr‚ LefŠvre, 1964, no.122. Lisbon, Funda‡ o Calouste Gulbenkian, no.116. NOTES Klee's art is virtually unique in the history of the Twentieth Century in that Klee was the only modern artist who allowed his work to roam freely between the organic and the geometric, the constructive and the intuitive, the figurative and the abstract and between the purely linear and the wholly chromatic. Painted in 1931 Clown mit Kind (Clown with child) is a work that derives from Klee's teachings at the Bauhaus and which combines many of these seemingly paradoxical elements into one striking and unified image. Executed using thick oil paint that has been gently smeared, smudged and layered over a board support, Klee has unconsciously created a mottled and vibrantly coloured universe of formlessness. It is a cosmic soup suggestive of a mystic hallucinatory cloud that conjures up an atmosphere of dreaming. Onto this background like a calligraphic diagram appears the archetypal image of a clown carrying a small child - seemingly wearing a sampan. The transparency of this figure seems to both emerge from the background and hover over it like a dream image that has been constructed in the mind of the dreamer, its calligraphic simplicity seeming to suggest that like a cipher or a sign, it holds some symbolic meaning. Representing a familiar and benevolent persona from the lexicon of archetypal figures that periodically emerged from the artist's unconscious to populate his painted worlds, the two figures are essentially formed by a carefully constructed series of overlapping and transparent triangles. The source for these figures is a drawing that Klee made at the Dessau Bauhaus in 1929 entitled Fear of becoming Double and it, like the drawing relates closely to the exercises in constructive geometry that Klee and Kandinsky taught on the painting course in their last years at the famous artschool. In the painting, Klee has softened the sharp geometry of the drawing by using a more gentle and meandering line and transformed the sharp angles of the figures' face into the soft features of a Pierrot-like clown. Silhouetted against the cosmic mist of the background, this altogether more sympathetic figure appears to be wandering through a mystic landscape. In purely formal terms, the painting also demonstrates Klee's unique ability to derive a powerful visual poetry from the simplest of means, combining linear and geometric form with chromatic abstraction Klee conjures out of six triangles and a textural background a memorable informel image.