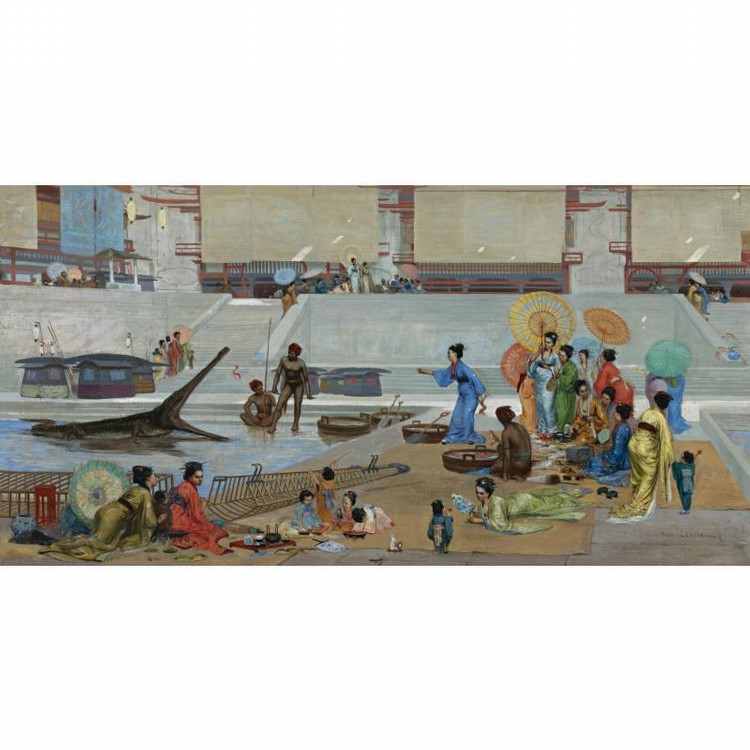 Private Collection, Florida, (since circa 1920)

The history and traditions of the East were interpreted and often imaginatively revised by scores of nineteenth century European artists. In particular, the brief and brilliant career of Lenoir is replete with fascinating depictions of Middle Eastern, Indian, and Asian cultures. In 1873 the artist completed at least three major works depicting the relationship of Eastern peoples with their sacred animals. The meaning of these works, encoded in a series of complicated visual details, is particularly puzzling to today's viewer, as their narrative meanings have largely been lost to time. The present work, now known as Gift of the Gharial, features one of the most primitive of the crocodile species, short legged with a powerful tail and long snout filled with rows of small teeth perfect for catching and eating fish. Yet while the kind of animal is identifiable, its placement--sitting in a shallow pool, minded by two turbaned figures, as a kimono-clad Asian woman throws a fish toward his mouth--is decidedly more obscure. Adding to the puzzling scene are the series of finely painted details of a life-size fretted body cage which transported the animal, the various boxes, kettles, and cups of the group's picnic in honor of the amphibious guest, and the magnificent architecture and imperial decoration of his new habitat. While it is unknown precisely what the source material for this scene may be, its composition is most likely based in historical fact. Gharials were frequently found in India's Ganges river, and it was a known practice among Maharajahs to send lavish and exotic gifts to their counterparts in other lands, such as Japan and its Emperor. Besides being graceful gestures, such presents certainly conveyed an idea of the donor's wealth, status and power to the recipient.

While the choice of a gigantic crocodile may seem an untraditional gift at best, it does make cultural sense. The animal held sacred and mythological importance to both Indian and Japanese cultures. According to Hindu mythology, makara, a mythical creature, is the vahana (or transport) of Ganga, goddess of the river and Varuna the god of sky and rain. Traditionally, a makara is considered to be an aquatic creature, and some accounts identify it with a crocodile, whereas others believe it to be a dolphin. In either case, the animal is closely connected to water; the source of all fertility and its countenance is often used as decoration in the entrance of Buddhist monuments or on royal thrones. The crocodile held an important place in Japanese mythology as well. A crocodile was the mount of the legendary hero Hiko-hoho-demi, from which some believe all Emperors of Japan have descended, and Ryujin, god of the sea is often portrayed as a crocodile-like dragon. Finally, in his inclusion in the foreground of a particular child's pull-toy, Lenoir connects his work to the famous Japanese story of the Izumo Cycle, that of Okuninushi and the White Rabbit. In the legendary tale, the Great Lord Okuninushi comes across a crying rabbit with its own tragic story to tell: the rabbit had never been on the island of Oki, blocked by a flowing river without a bridge and full of crocodiles. In return for safe crossing on the crocodiles' backs, the rabbit promised to count how many of the creatures could fill the water end-to-end, thereby determining if they or the monsters of the sea were more numerous. After crossing the rabbit refused the promise and was skinned alive as punishment. Compassionate Okuninushi told the distressed rabbit to go to the river and wash himself in pure water and then roll on ground sprinkled with the pollen of kama grass. The rabbit did so, his snow-white fur was returned, and revealed himself to be a deity (Roy Willis, ed., World Mythology, New York, 1993, pp. 118-120).

While such specific symbolism may likely have been missed by Lenoir's contemporaries, the exotic appeal of the work was undeniable, and remains so today. Although in the late nineteenth century Japan and India became increasingly open to Western exploration and colonization, its culture continued to hold a certain mystique, considered with some suspicion. Indeed, a traveler to the region remarked on the strange allegiance to crocodiles: "His Highness receives his subjects and conducts affairs of ceremony. Behind it is a relic of some of his... ancestors in the form of a tank, in which a lot of...crocodiles are kept for the amusement of people who like that sort of thing. They are looked after by a venerable...old Hindu, who calls them up to the terrace by uttering a peculiar cry, and, when they poke their ugly noses out of the water and crawl up the steps, teases them with dainty morsels"( William Eleroy Curtis, Modern India, Chicago, 1905, n.p.). Such cultural commentary is safely removed in Lenoir's well-painted, somewhat fantastic scene, as he communicates an idea about an exotic people by infusing the work with an incredible story, removing any real responsibility to ethnographic representation.