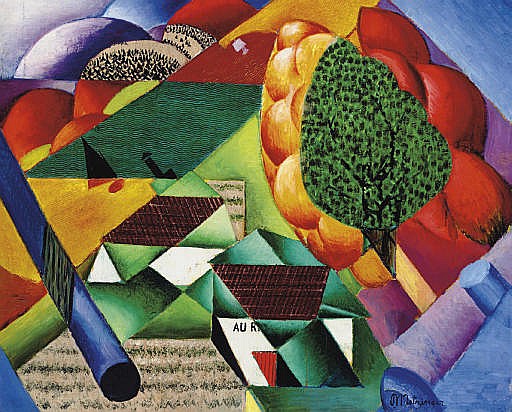 On occasion, Christie's has a direct financial interest in lots consigned for sale which may include guaranteeing a minimum price or making an advance to the consignor that is secured solely by consigned property. This is such a lot. This indicates both in cases where Christie's holds the financial interest on its own, and in cases where Christie's has financed all or a part of such interest through a third party. Such third parties generally benefit financially if a guaranteed lot is sold successfully and may incur a loss if the sale is not successful.
No sales tax is due on the purchase price of this lot if it is picked up or delivered in the State of New York.
*This lot may be exempt from sales tax as set forth in the Sales Tax
Notice in the back of the catalogue.

Metzinger was discharged from the army in autumn of 1916 after serving over eighteen months as a medical orderly, and his return to painting witnessed a shift in attention away from earlier, painterly questions of surface quality to those of a more transcendental nature. The experience of the First World War was one of profound disturbance for Metzinger, an avowed pacifist. But while he was caught up in sobering conditions of wartime loss and devastation, he plumbed the "fourth space" of the mind, introducing a self-consciously metaphysical aspect to the theoretical study of Cubism that had preoccupied him in the years leading up to the war. In a letter to Gleizes dated July 4, 1916, Metzinger explained, "After two years of study I have succeeded in establishing the basics of this new kind of perspective I have talked so much about. It is not the materialist perspective of Gris, nor the romantic perspective of Picasso. It is rather a metaphysical perspective--I take full responsibility for the word. You can't begin to imagine what I've found out since the beginning of the war, working outside painting but for painting. The geometry of the fourth space has no more secrets for me" (quoted in D. Robbins, "Jean Metzinger: At the Center of Cubism, Jean Metzinger in Retrospect , exh. cat., Iowa City, 1985, p. 21). The year 1916 marked a significant shift in Metzinger's approach to painting. He applied his newfound perspective, which infused the hallowed geometries of the Section d'Or with the less rational subjectivities of the mind, to wide-ranging effect in his late Cubist works.

Apollinaire wrote in 1913 that Metzinger's "art, always more and more abstract, but always charming, raises and attempts to solve the most difficult and unforeseen problems of aesthetics" ( op. cit. , p. 44). The intellectual bent to Metzinger's art dates to well before the war; he is perhaps most widely known as a sensitive and intelligent theoretician of Cubism, a distinction that dates to the 1912 publication, with Gleizes, of On Cubism . Yet even as early as 1911, Robbins notes, Metzinger had already abandoned the increasingly hermetic path of Braque and Picasso for the recognizable subjects of the external world. His introspective turn in response to the disruptions of war would produce some of the most austere and evocative paintings of his career, redirecting his earlier attention to the subjects of Parisian life (e.g., Dancer in a Café ) to more weighty and existential themes.

Paysage shares with the later Cubist works a "greater abstraction of form and flattening space," characterized by movement away from the agitated surface of his earlier work ( op. cit. , pp. 43-4). All-over surface patterning becomes more important and plays a constructive role here, expanding the faceting of early Cubism into strong diagonal elements that structure the canvas from each of its four corners. Color retains its earlier importance but in a more mature and harmonious application than before, cleanly articulating the faceted "cubes" of the landscape. This is an active yet disjunctive landscape, energized by the tree trunks that bear a resemblance to gun or cannon barrels, as Robbins observes, and by the "highly stylized tree foliage that suggests clouds or hills," seeming to float in space ( op. cit. , p. 45). Metzinger's interest in depicting motion dates to 1911-12 (e.g., The Racing Cyclist ), perhaps under the influence of the Futurists, and Paysage draws a later parallel with Severini's Red Cross Train Passing a Village (fig. 1). Both painted in the shadow of the war, they share bright, expressive color, fractured imagery and a concern to deconstruct their motif, finding in allegorical landscapes a philosophical and political commentary on the war.