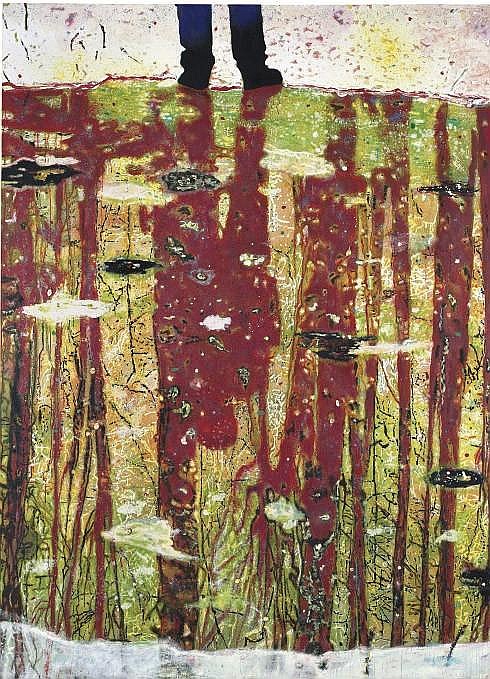 Gavin Brown's Enterprise, New York
Acquired directly from the above by the present owner, 1996

"A moody reflection in a pond -- Reflection (What does your soul look like) -- becomes a speculation on the substance behind the image, perhaps what lies behind all images" (J. Nesbitt, ed. quoted in Peter Doig, exh.cat., London, 2008, p. 28).

With its towering presence and sublime painterly surface, Reflection (What does your soul look like) dominated the central room of Peter Doigs Tate retrospective last year and is quite simply, one of his greatest works. The painting sets up an extraordinary scenario with an almost lifesize representation of a reflection in water of a human figure, hanging upside down and staring straight back at us, with only the 'real' legs visible at the top of the painting. The reflection seems to disappear and reappear, as the eye finds it difficult to settle on the 'surface' of the water and reflection contained within. Like all great art, it does not simply offer a window onto another world but becomes that world, as the viewer attempts to come to terms with the implied relationships between staring into the seemingly limitless surface of water and that of a painting. This picture, which dates from 1996, perfectly demonstrates the incredible combination of painterly, conceptual and poetic maneuvering which makes Doigs work so fascinating. Doig has used this picture to investigate, explore, manipulate and ultimately celebrate the way in which we see, in which we perceive things.

The title of this painting introduces a certain existentialism, implying that the figure reflected in the surface of the water is wondering about the nature of his own soul; we too, as viewers, look at this gorgeously rendered red cipher and are invited to contemplate our own lives and spirit. Although the subject is not identified, it is a painting of his brother's reflection. However, Doig has intentionally cropped the image, so that it could stand for everyman. There is a reflection here, then: the painting shows a sort of modern Narcissus absorbed by his own reflection, and Doig places us into the same position, luring us through the sensual build-up of paint on the surface. At the same time, the title is a reference to a track by DJ Shadow, whose album Endtroducing, released the same year that this work was painted, contained several versions of his 1994 single, What does your soul look like. DJ Shadow is a modern master of sampling various forms of music to create an atmospheric audioscape. Doig himself is a form of artistic sampler: this picture can be seen to echo Gustav Klimt's landscapes, Caspar David Friedrich's figures, Monet's waterlilies, Pollock's drip. Yet, as with DJ Shadow's samples, these strands have been reconfigured to create an image and atmosphere which carries completely new implications and philosophies.

Our eyes are drawn across the surface, which is deliberately interrupted with the snaking forms of the trees and branches, with the gestural dabs that form the flotsam on the waters surface, with the drips and splashes that, when seen in their entirety, coalesce mystically to form the picture itself yet dissolve again into details and brushstrokes. The rich kaleidoscope of colors and the dense application of paint with its intricately veiled layers, looping skeins and impasto blobs at once create a remarkable sense of grand depth, whilst also re-emphasizing the real space, the flatness of the canvas and the nature of paint itself. Doigs painting is a paradox, emphasizing its own artificiality through the wealth of sensual detailing of the surface yet remaining figurative, reflecting the artist's own assertion that, "I am always interested in what we miss when we try to focus on what we see" (P. Doig quoted in H. Fricke, "Drifter: An Interview with Peter Doig," 2004, reproduced on DB Artmag at www.deutsche-bank-art.com).

Reflections have featured in many of Doigs most important works, for instance Blotter, 1993 (Walker Art Gallery, Liverpool), Echo Lake, 1998 (Tate, London) and 100 Years Ago, 2000 (Musée dArt Moderne Centre Georges Pompidou, Paris). Emanating from his years spent between the ages of seven and twenty in Canada, Doigs exposure to the grandeur and expanse of landscape and, indeed the landscape painting of Tom Thomsom and the Canadian Group of Seven, made him think deeply about its implications on human existence. Of course many artists have attempted to tackle this subject matter throughout art history, but as with so much of Doig's work, here he takes a traditional pictorial form and literally turns it on its head. Where Klimt and Monet were focused on the representation of the image and light on the surface of the water and lilies which sat upon it, Doig uses the stuff of paint to emphasize its material proximity to water. Whether it be through the heavily thinned down pigment which builds the veils of color beneath the surface, or through the splashing and dripping of paint across the surface, there is an incredible friction here between the representation of water and the use of a 'watery' substance to create it. "Thicker, half-mixed paint is scrubbed over thin, the reflections in the surface half-drowned by an insistence on the factual matter of paint, which itself has both the wetness and transparency of water, as well as sitting on the surface of the painting in much the same way as rafts of weed and scum sit on the surface of a pond. There is a confusion of surface and depth, distance and proximity, materiality and illusion" (A. Searle quoted in "A kind of blankness" in Peter Doig, pp. 73 and 79). What we therefore end up with is an incredibly complex painting which is by its many turns, extraordinarily figurative with a gorgeously amplified Canadian light and atmosphere, mystically abstract in the variety of painterly processes which are applied to the surface and are profoundly conceptual in their metaphorical associations.