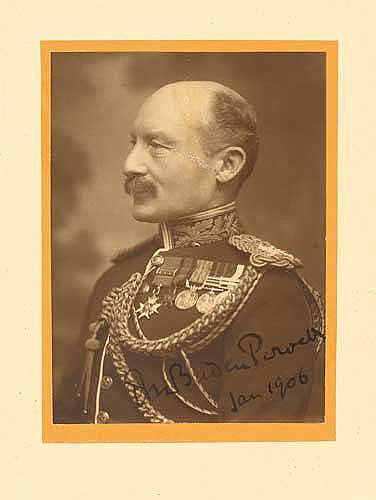 The Papers of Col. F.W Panzera, DAAG Artillery Defences and C.S.O, comprising:- typed document dated 18 October 1899 signed by Baden Powell with three additional manuscript additions, regarding the Defence of Mafeking - I feel assured that if need arises the British pluck and determination of these inhabitants of Mafeking ... will see the show out to a triumphant finish ... and that, with or without Reinforcements, whether from north or south, we shall by standing together add the name of Mafeking to the roll of famous posts that form the Frontiers of our Empire ; autograph note dated 19 October signed RssBP by Baden Powell regarding a map of the waterworks to look at for a few minutes . The following day the British launched a successful attack on Boer positions; typed orders dated 31 October appointing Major Panzera CRA Headquarters Staff, and details of the BSA Detachment returning to HQ at Cannon Kopje in the armoured train; typed Memorandum to Officers Commanding Corps dated 17 November si ned by Lord Edward Cecil CSO dealing with regulations governing prisons and field imprisonment, The prisoner may be kept in irons and may be secured so as to prevent his escape ... locally the punishment should be carried out at night, to avoid publicity before Natives ... ; typed General Order dated 18 November signed by Lt Hanbury-Tracy, mentioning the court-martial of Lt Murchison, who shot dead the war correspondent of the Daily Chronicle after an argument; orders re liquor bars and prices of commodities; autograph letter to Major Panzera dated 7/12 (18)99 written from Mr Weil's Bomb Proof by Lady Sarah Gordon-Wilson a day after being released by the Boers, having been captured as a spy and exchanged for a horse thief. Aunt of Winston Churchill, she writes I am truly thankful to find myself back amongst friends . On the reverse of the letter is a final page from Panzera to his wife detailing siege events - shells falling into the chemist, a native blown up and information gathered by Lady Sarah while in Boer hands ; autograph order dated 22 January (1900) by Baden Powell initialled RssBP, The police are doing nothing to stop the crowd of Native loafers in town. Will you issue an order that no natives are to be allowed in town unless in possession of a pass. Until passes are printed the tin meal tickets possessed by all town natives sh. suffice ; autograph note dated 4th February initialled BBP from Baden Powell regarding a dummy show that day - dummies were created to deliberately deceive the Boers; autograph note dated 19 February initialled RsBP by Baden Powell regarding hand grenades for trial - I am sure they might be of great use in brickfields ... ; autograph letter dated 22 February signed by Baden Powell in full, thanking Panzera for his good wishes on the occasion of his birthday - I hope I shan't have any returns of the day cooped up like this again ; autograph note dated 28th initialled RssBP by Baden Powell regarding ammunition and what progress in dynamite spring g n making ; typed Military Report dated 4 March 1900 signed by the Town Clerk, J.R Algie, reporting on the Boer retreat out of rifle range of the Town ; studio photograph of Baden Powell autographed and dated Jan 1906; three autograph letters to Panzera dated 1904, 1907 and 1909, the latter regarding a book that Panzera wrote on the Territorial Army, with a further letter by Lady Roberts; autograph letter signed Robert Baden Powell with cover dated 5 June 1917 written by Lord Baden Powell to Mrs Panzera following the death of her husband. Written on notepaper of The Boy Scouts Association in London, he condoles The news will come as a shock to a very large number of his friends and Mafeking Comrades. He was a splendid type of man and the bravest I ever saw. To me personally he was the most loyal and helpful officer and I owe him much that I could never repay. I had a great affection for him. ; also a Good For voucher for two shillings, seven original photographs and three postcards of Mafeking durin the siege. Col. Francis William Panzera, CMG (1851-1917) commanded the Imperial Base at Macloutsie during the Matabele War 1893-4, was expert adviser at the time of the Jameson Raid trial 1896; Special Commissioner in Ngamiland 1898-99; commanded the artillery at the Defence of Mafeking; twice mentioned in despatches; 1904 appointed Acting Resident Commissioner for the Bechuanaland Protectorate and Resident Commissioner in 1907. In 1916 he was appointed Commandant of the Alien Camp at Knockaloe, Isle of Man, and died there suddenly in 1917. A unique archive of important primary source material relating to one of the most celebrated events during the Boer War. (29 items).