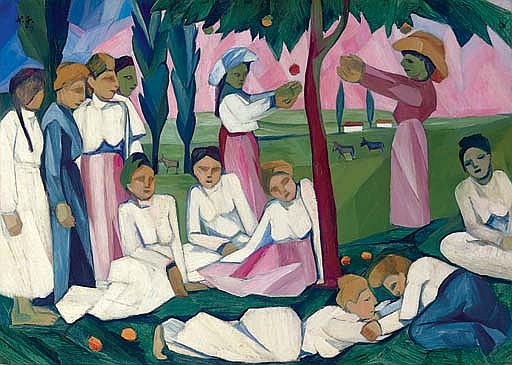 Acquired from the artist by the family of the present owners in 1962.

Property from a Private American Collection

VAT rate of 5% is payable on hammer price and at 17.5% on the buyer's premium.
'The material of a work, and beyond that, its creative spirit, lies not in the individual, but in the people, in the nation to which the individual belongs, in its earth and nature. It is part of the common popular soul, like a flower on a huge tree. True, the flower may be torn from the tree and planted in an artificial growing environment, and at first it will perhaps begin to bloom still better, but even so, it would have been nicer had the flower remained on the tree. For the Russian artist, this tree is Russia and the East, but not Europe, from whence she can and must take military ships, aeronautics, methods for attack and defence. The artist, however, needs to devote his life to indigenous places, to take life from indigenous places' (Natalia Goncharova, 'Letter Boris Anrep', 1914, quoted in Amazons of the Avant-Garde, exh. cat., New York, 2000, p. 315).

Picking Apples is one a series of highly important paintings of Russian Peasants made by Natalia Goncharova between 1908 and 1911, that proudly announce the awakening of a new indigenous spirit in Russian art and lay the foundations of its avant-garde. Dealing predominantly with the theme of the harvest, as a collective point of social interaction between peasant folk and the land on which they lived and worked, this cycle of paintings marks a new unity of purpose in Goncharova's work that emphasised self-reliance and independence from outside influence. In this, these paintings also marked the beginnings of the new direction in Russian art that would ultimately inform the radical directions taken by Kasimir Malevich and Vladimir Tatlin a few years later.

A fusion of both Western and Oriental influence that draws on the bold colours and simple forms of traditional Russian folk art as well as the recent developments of the French avant-garde, Picking Apples is a work that propagandises its Neo-Primitive ideals through the grace, order and harmony of its form, colour and composition. The painting, along with others such as Bleaching linen and Washerwomen of 1911 in the State Russian Gallery, St Petersburg, Peasants Picking Apples of 1911 (Tretiakov Gallery) and Spring Gardening of 1909 (Tate Modern, London) forms part of a radically new series of works that consciously turned away from a conventional portrayal of bourgeois life in favour of a celebration of the elemental simplicity, and vitality of Russian rural life. Most of these paintings were made by Goncharova during her frequent summer visits to the family home at Polotnianyi zavod near Moscow and belong to a place and a time that, as she recalled of the painting Spring Gardening, was the happiest in her life.

When she began this series of paintings in 1908, Goncharova had already absorbed the influence of the French avant-garde. She was well aware of the developments made by Cézanne, Gauguin, Van Gogh, Matisse, Braque and Picasso alongside whom she had exhibited at the Blue Rose and Golden Fleece exhibitions in Moscow and whose art was also well represented in the famous Moscow collections of Sergei Shchukin and Ivan Morozov. After the 1908 Golden Fleece exhibition Goncharova and her husband Mikhail Larionov engaged in an active program to 'defrenchify' Russian art. Much of the formal discipline of the French avant-garde, they reasoned, owed its origins to Eastern art, as, in its own way, did Russian art. Welcoming the developments of the Parisian painters, Goncharova now believed it was necessary for Russian artists to turn away from French influence and look to their own heritage, also Eastern in origin, and to create a truly indigenous art of its own. 'Cubism is a positive phenomenon,' she wrote, 'but it is not altogether a new one, especially as far as Russia is concerned. The Scythians made their stone maidens in this hallowed style. Wonderful painted, wooden dolls are sold at our fairs. These are sculptural works, but in France, too, it was the Gothic and African figure sculptures that served as the springboard for Cubist painting' (Natalia Goncharova, 'Letter to the Editor', 13 February, 1912, quoted in Amazons of the Avant-Garde, exh. cat., ibid., p. 312).

Prompted by such a recognition, Goncharova and Larionov drew on primitive and folk traditions in Russia, in particular icon painting and the cheap popular print or lubok, as well as children's drawings, Siberian effigies, carved wooden toys and rural handicrafts, as sources of their work. In Picking Apples Goncharova has taken the first steps in this direction, fusing the harmonious classicism of Puvis de Chavannes and Maurice Denis and even Gauguin's Tahitian scenes with a Fauvist intensity of colour and form to create a brilliant and complete vista of harmonious summer life. These European avant-garde influences underpin a strictly Russian scene of local people supposedly engaged in the act of apple picking, but in fact happily and languidly enjoying the summer day in a way that recalls the Flemish peasants of Pieter Brueghel's 1565 masterpiece Harvest. Simplifying the features and the form of the figures in a sculptural and cubistic way that recalls carved wooden dolls, Goncharova has endowed these wholesome peasants with a simplicity and elegance of form that seems to ennoble them. These features are echoed throughout the composition in the elongated trees, wooden-toy-like donkeys and the cubistic planes of the fields and the warm pink sky above them. With their simple two-tone costumes of white and pink seeming to echo this clear division of earth and sky, the community of peasants is rendered in such a way that it punctuates and articulates the simple and idyllic landscape without disturbance or rupture. Gathered around the trunk of an apple tree that harmoniously divides the flattened vista à la Gauguin along the lines of the golden section, these peasants lead the eye across the canvas in such a rhythmic and lyrical way that they assert a keen identification between figure and place. As this formal harmony makes clear, these peasants belong to this land. They are as much a part of the whole of the landscape as the trees, the animals or the fruit which they have come to pick.

'Great and serious art' Goncharova wrote in a statement of 1911, 'cannot help but be national. By depriving ourselves of the achievements of the past, Russian art is cutting itself off at the roots. I do not mean to say that foreign influences are harmful or useless. But the foreign must be merged with one's own. Only in this manner will that great force be created that will move art forward... It seems to me that we are living through the most critical moment in the life of Russian art. The factors that have caused this are: the strong impact of French art of the last decades and the strong rise in interest in ancient Russian painting. If one looks closely at the work of contemporary French artists, beginning with Cézanne, Gauguin and Van Gogh, and at ancient Russian painting - if one thinks hard -it becomes clear that the aims of one and the other coincide. This is the only true constant aim in art. Aspiring to the decorative while preserving philosophical, religious, and literary differences in context' (Natalia Goncharova, Press Statement, 24 December 1911, quoted in Jane Sharp, Russian Modernism between East and West: Natal'ia Goncharova and the Moscow Avant-Garde, Cambridge, 2006, p. 271).

In this context, with its manifest assertion of the shared identity between the peasants and their land, the figures in Picking Apples and their activity of harvesting take on an epic almost sacred quality that echoes the function and nature of Russian folk tradition. Indeed, this almost propagandistic statement of community and identity between people, land and nation poetically voiced here in this paintings by Goncharova was an element taken up with renewed vigour and for very different ends in the late1920s and early 1930s by the state-sanctioned Socialist realism of the Stalinist era.