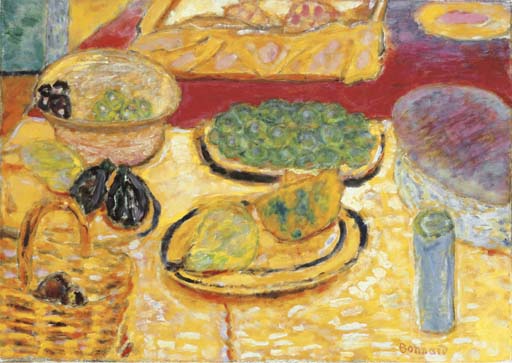 PROPERTY FROM THE HENIE ONSTAD ART CENTRE, SOLD TO BENEFIT THE ACQUISITIONS FUND

Painted in 1940, the celebrated and much exhibited Le dessert is a mouthwatering feast for the eyes. The radiant colours and sensual subject matter combine to create an intense picture that truly translates the lusciousness of the fruit. The arch-colourist surpasses himself in his ability to convey sensation through his intense colours. The theme of food in Bonnard's work appears in many of his most famous pictures. Tables laden with foodstuffs, shown either with or without other figures, feature in museums as varied as the Centre Pompidou in Paris, the Tate in London, the Art Institute of Chicago, the Museum of Modern Art and the Guggenheim in New York. The subject was one that intrigued Bonnard, and featured again and again especially from the moment that his post-Nabi colourism came to the fore. Bonnard was, after all, a sensual man, and his art revels in the indulgence of the senses. Alongside his pictures of naked women, these pictures of food show the artist as a true bon viveur, willing to convey his enjoyment of life through his paint in a similar way to Matisse, another artist based in the South of France at this time. Le dessert is more than a painting of food: it is an entire feast, and carries with it the painter's own enjoyment of food, and of company, and of living well.
Still life painting was ideally suited to Bonnard's concept of art. Now, the compositional alterations that he utilized in interiors and in landscapes could be taken to the extreme, as he planned the layout of his scenes. In Le dessert, we see the recurrence of the vertical and horizontal elements that he had so long favoured in his art. Here, they are accentuated by the interior itself, and by the layout of the objects. This is most evident in the red area of the table. Appearing in several of his late still life paintings, for instance the Art Institute of Chicago's Corbeille et assiette de fruits sur la nappe à carreaux rouges from the same period, this is in fact the red felt of his dining room table, showing where the tablecloth ends.
By being able to manipulate the presentation and layout and composition of his still life paintings, as here, Bonnard found a happy formula by which he surpassed the restrictions of the surface: 'The main subject is the surface, which has its color, its laws, over and above those of the objects' (Bonnard, quoted in A. Terrasse, 'Bonnard's Notes,' pp. 51-70, Bonnard: The Late Paintings, ed. S.M. Newman, exh.cat., New York, 1984, p. 70). Here, too, the main subject is the surface, as it is in so many of his colourist paintings. Where in other works, the represented objects are suborned to the overriding authority of aesthetics, here the objects themselves have been moved and shifted, a perfect angle found, Bonnard able to fit reality to his painting's necessity even before putting brush to canvas.
The extent to which Le dessert has been exhibited internationally points towards its importance. So too, its inclusion in the collection of Sonia Henie and her husband Niels Onstad, and later their museum. Henie was a world-famous Norwegian ice skater, and won the Olympic gold medal three times. With her husband, a Norwegian shipping magnate, she shared a love of art, and the pair set about assembling a formidable collection of modern and contemporary art. During the course of their collecting, they even became friends with some of the artists.
Both Sonia and Niels were highly motivated as collectors, and as benefactors of the arts. Early on, they began to see to which institution they could leave their formidable group of paintings, but the predominance of the European contemporary, especially during a period when American artists were in the ascendant, meant that many institutions looked this gift horse in the mouth. Eventually, rather than accept any weak compromise from an established institution, they founded their own museum, which to this day attracts one of the largest numbers of visitors of any museum in Norway.