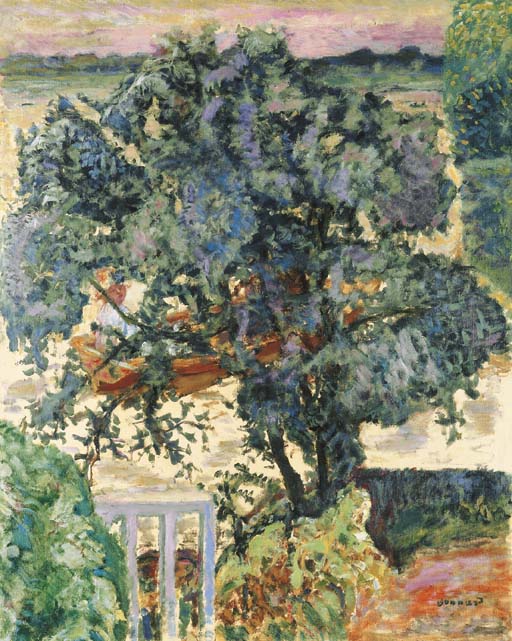 PROPERTY FROM THE HENIE ONSTAD ART CENTRE, SOLD TO BENEFIT THE ACQUISITIONS FUND

Painted circa 1909, L'arbre près de la rivière dates from an exciting period during which Bonnard's Nabis style was ceding to the increasing influence of his interest in colourism. The gentle tones that he has used to paint the tree and its leaves show his instinctive, virtuoso understanding of colour, perfectly expressing the dappled effects of light and shade, while still recalling the muted and sepia tones of his Nabi works. Meanwhile, the woman in the boat, presumably the artist's wife Marthe shown concealed by the branches of the tree, combines with the angled perspective to demonstrate the compositional daring, in part a reaction to the realism of photography, of this painting.
Since the beginning of the 1900s, Bonnard had spent less and less time in the metropolis that had fuelled so much of the content of his work for so long. He spent far less time in Paris in particular, travelling instead through the countryside and internationally. Naturally, this soon became apparent in a shift in his subject matter, and a growing interest in country landscapes. At the same time, L'arbre près de la rivière dates from a turning point in Bonnard's career during which he began to spend time in the South of France, as well as his native North. This led to an intriguing battle between styles and manners of depiction. In his Southern works, he would introduce a dazzling world of bright colour and idealism bathed in a never-dimming Mediterranean sun. By contrast, the more Northern works such as the present painting are dedicated to the infinite subtle plays of light from the changing weather, and from an analytical, objective level of observation. During the 1930s, he would rediscover the North, and spend time almost every year at Deauville, explaining that the changeable weather, and therefore the fleeting light effects, that had so intrigued Boudin earlier were a constant wonder and an inspiring challenge.
Bonnard's enthusiasm for Impressionist plein-airism was crucial to Bonnard's artistic reincarnation after 1900 when he left behind the intimacy of his Nabi interiors:
'When my friends and I decided to pick up the research of the Impressionists and try to take it further, we wanted to outshine them in their naturalistic impressions of colour. Art is not Nature. We were stricter in composition. There was a lot more to be got out of colour as a means of expression' (Bonnard, quoted in N. Watkins, Bonnard, London, 1994, p. 61).
Here, we see Bonnard truly managing to harness colour, using it to perfectly capture the intended effects. The large scale of the painting, and of the brushstrokes in it, ensure that this work shimmers like an Impressionist painting. Likewise, he has left small areas in reserve, harking back to the Japanese art that was so crucial to his Nabi work, where the areas of bare canvas add an extra intensity to the paint, a contrast that is between textures as well as colours, between the absence and presence of the oils themselves. The same tapestry-like surface, the same interweaving of texture and colour, that he had developed to such acclaim in his Nabi interiors is here adapted to new use in a plein-air landscape.
L'arbre près de la rivière also demonstrates how much Bonnard was fascinated by challenging perspectives. Here, we see the verticality of the tree echoed by other vertical elements, while contrasts are provided by the horizontality. In this way, Bonnard manages to fill L'arbre près de la rivière with an almost musical sense of visual rhythm. This also creates an intriguing interplay between the various larger fields of colour. Bonnard has adapted the cloisonnisme so favoured by his friends amongst the Nabis and amongst the wider group of Symbolists, but has removed the boundaries, allowing the colours to be thrust into relief by their juxtaposition and interaction, rather than their being contained within dark outlines. Bonnard is using his instinctive understanding of colour and colour balance in order to perfectly conjure up the vision of the tree, water and canotier before our eyes.
The strictness of composition of course extends to the manner in which the boat has been partially obscured by the tree, recalling the immediacy of photography. Thus Bonnard manipulates the seeming imperfection of the moment and of his angle to add a layer of realism to the work. The contrast between the luminous boat and the more shaded tree also presents the artist with an intriguing challenge, an experiment in contrasts between the distant and the near, the light and the dark.
L'arbre près de la rivière was owned by Niels Onstad and his wife, Sonia Henie. The latter was world famous both as an Olympic ice skater and as a pioneering patron of the arts in her native Norway, founding the Henie-Onstad Foundation and its associated museum with her husband. For a more in depth discussion of the Onstads as collectors, please see the catalogue entry for Lot 18.