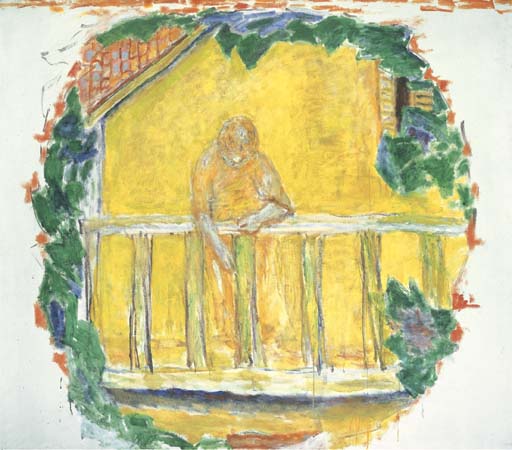 Louis Carré, Paris, by whom commissioned directly from the artist; his sale, Maîtres Ader, Picard et Tajan, Palais d'Orsay, Paris, 27 April 1978, lot 29B (illustrated both in colour and black and white).
Pierre and Micky Alechinsky, Bougival.

PROPERTY FROM THE COLLECTION OF MR PIERRE ALECHINSKY

The Painter Playing his role

'In the almost-square of his canvas, Bonnard placed an almost-circle, and, by the virtue of a green and violet border, the part of emptiness deliberately rendered visible, he set out to surround, protect, a center - a figure, balustrade, balcony, wall - from the reach of 'hostile neighbours'...That marvellous yellow? A silent lesson. The eye will grasp neither its beginning not its end. I have been living with this painting for a quarter of a century.

La cueillette des fruits (Fruit picking) is a painting from the final years, but one that was long almost a secret. In late paintings it is not unusual to see an artist suddenly touching on the essential. Beyond the influence we can imagine him having on a few 'visual artists' (I prefer to say 'painters'), Bonnard opened up a path. People talk of the vibration of colour in Rothko, for example. When it comes to ricochets and harmonics I see the effects more in the work of a young American who arrived in Paris after the war to drink deep of painting and to act: Sam Francis, who developed those sumptuous fields of gold in the 1950s. But in the age of 'Tachisme' of 'Art Informel', no-one saw that the strangeness of Sam's luminous colours was already there in Bonnard. Although the sola coating, the fluidity - that controlled abandon, let's say, were probably conveyed from a more distant source: via Monet, the modernity of Turner in Venice.

A page in the journal Verve offers photographs of him working. You can recognise the house in Le Cannet, likewise La cueillette des fruits. The painter gave himself to Gisèle Freund's lens with that innocence you find only in old age. It goes much further than the famous innocence of childhood. How extraordinarily engaged he is, the painter of 1946! And so the paintings of La cueillette des fruits attest to both this total innocence at liberty, and to a knowledge at its apogee of which, as a sensitive alchemist, Pierre Bonnard was the greatest'.