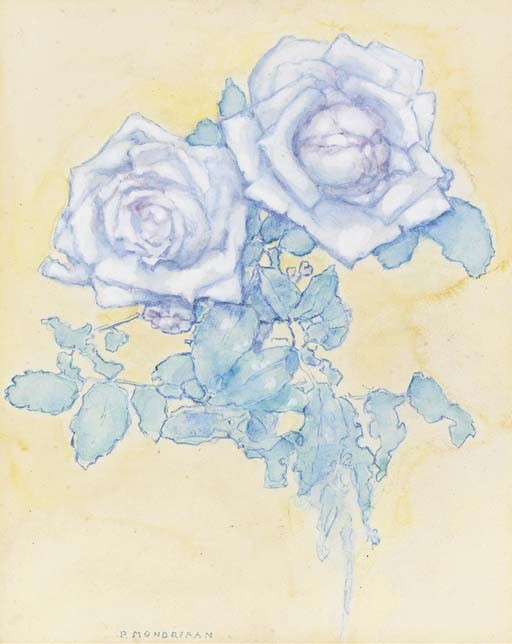 By 1920 the abstract grid had become the foundation of Mondrian's pictorial style, and in that year the artist wrote the pamphlet Neo-Plasticisme to promulgate the goals of the Dutch Die Stijl movement. Mondrian found it difficult, however, to interest collectors of his earlier work in his most recent efforts. An exhibition of recent paintings at Léonce Rosenberg's Galerie de l'Effort Moderne in 1923 had been a failure, and during this period Mondrian was desperately in need of sales.

Fortunately, Mondrian's Dutch dealer Simon Maris still had an eager market for the painter's early naturalistic works in Holland, especially his studies of flowers (see Christie's, Impressionist and Modern Art Day Sale, 5 May 2005 lot 301). Mondrian resumed painting flowers in the spring of 1922, mainly roses, chrysanthemums, lilies and amaryllis, which he could sell for 30 or 40 florins apiece. In "Blown by the Wind," the final article he contributed to the journal Die Stijl in 1924, Mondrian wrote, "The artist has few chances to earn money outside his field: if the buyers demand naturalistic art, then the artist can produce this with his skills, but distinct from his own work" (reprinted in H. Holtzman and M.S. James, ed., The New Art--The New Life: The Collected Writings of Piet Mondrian, Boston, 1986, p. 181).

Mondrian's treatment in the flower studies is naturalistic, but in their pale, ghostly tonalities, as well as their nebulous and timeless settings, these flowers possess Platonic and idealistic qualities that retain authentic overtones of the Symbolist milieu in which the artist first emerged as a modernist twenty years earlier. Their appearance and symbolism also stem from Mondrian's involvement in Theosophy, a movement founded in the late 19th century by the American Helena Blavatsky, who advocated the synthesis of the world's great religions through the study of esoteric texts and the occult. Mondrian began to study Theosophy in 1899 and joined the Dutch chapter of the society in 1909. The rose, the "queen of flowers," was sacred to Venus in antiquity, and became the floral symbol of the Virgin Mary. Thus, in its worldly guise, the rose represented the sensuality of the garden of Eros, and in its spiritual aspect, the white, mystic rose was the emblem of the divine paradise of Dante. The rose embodied the transcendent form of spiritual completeness and perfection, utopian ideals that Mondrian incorporated in his Neo-Plasticist agenda for painting. Two decades later in New York, Mondrian described one of his abstract grid paintings, Composition, 1933, to his dealer Sidney Janis as being "like a rose." (quoted in E.A. Carmean, Jr., "Mondrian Flowers," Modern Art Museum of Fort Worth Calendar, May-June 1991, p. 1).

Mondrian most often depicted the flowers in his gouaches singly; the rose appears in pairs, as two flowers growing from the same branch, in about half of the compositions in which he painted this subject. This perhaps suggests the pure union of two souls. Indeed, more than other depictions of flowers, the coupled roses appear to express the poignancy of romantic longing and love, evoking the idea of "love from afar" extolled by the troubadours in medieval courtly tradition. Robert Kenner has written, "If his abstractions asserted an unshakable faith in the triumph of clarity, order and world peace, Mondrian's flowers were more private expressions of joy and sadness, tenderness and pain. There is a melancholic intimacy to these isolated blooms as they wilt, droop, or dissolve into a watercolor mist" (in "Mondrian's Secret Garden," Art & Antiques, March 1991, p. 134). A.P. van Briel has noted Mondrian's occasional comments "that it hurt him to do those flowers" (in a letter reprinted in Mondrian's Creative Realism, Mijdrecht, 1980, p. 15). Some writers have asserted that when Mondrian ceased painting flowers in 1925, it was in order to enforce stylistic unity, a move that reflected his improved financial situation at that time. There may have well been more complex and emotional reasons involved--in any case, Mondrian always retained a fondness for these delicate studies, and, close as friends have attested, the artist usually kept a wall in his private living quarters dedicated to their display.