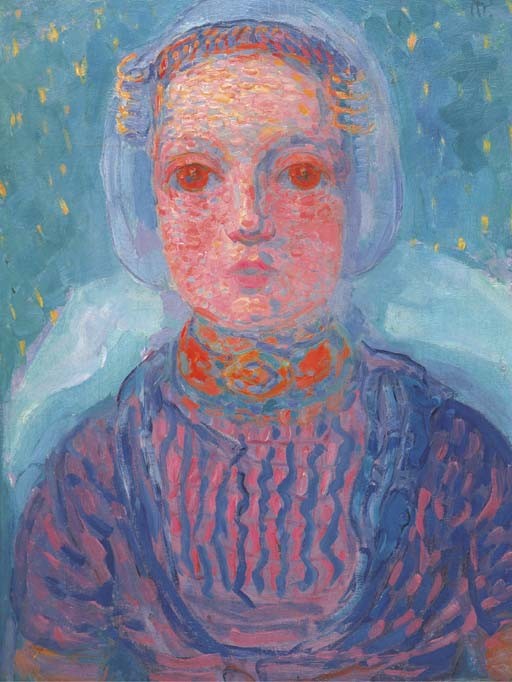 Zeeuws Meisje (Zeeland Girl) was painted in the summer of 1909 while Mondrian was staying in the village of Domburg in Zeeland on the North Sea Coast. It is thought that the sitter for the portrait was Adriana Maria (Joane) Wisse, the daughter of Mondrian's landlord in Domburg, the farmer Ko Wisse, whom Mondrian also painted at this time and whose portrait (Zeeuwse Boer ) is now on loan to the Haags Gemeentemuseum.

The paintings that Mondrian made in the summer of 1909 were all informed by an experimental Divisionism and a heightened intensity of colour. A long time devotee of Theosophy, Mondrian had become a fully paid-up member of the Theosophical Society in May 1909. At the core of Theosophical belief is a spiritual sense of the infinitude of the universe and a holistic vision of the inherent union between all material phenomena. The progress of Mondrian's art can often be seen as a search to expose this inherent union through his art. In Domburg he was drawn particularly to the monuments of the village and its surrounding sand dunes. In his paintings of these Mondrian employed and developed a luminist or Divisionist technique of splashes of rich colour that, covering both sky and dune or sky and lighthouse, generate an underlying sense of the unity of all matter.

In his two portraits from this period Zeeuwse Boer and Zeeuws Meisje Mondrian's use of divisionist flecks of colour to suggest an underlying spiritual unity between the human figure and its environment is also plain. Dressed in a typical Zeeland costume, this young Zeeland girl who is thought to have been only three and a half years old at the time she was painted, is a picture of wide-eyed innocence. Doused in a deep radiant golden light with star-like flecks of yellow dotted around her and her large spherical scarlet eyes staring out at the viewer, an intense and somewhat mystical atmosphere is conjured by this supposedly simple portrait.