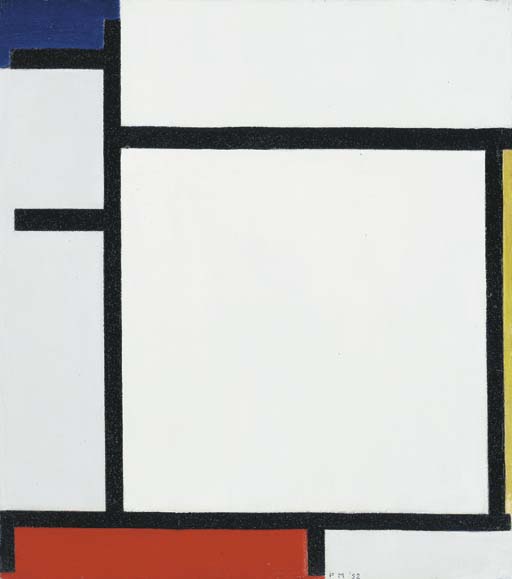 Composition with Blue, Yellow, Red, and Gray is one of the first group of pictures that Mondrian executed in his mature neo-plastic style. When he left Holland for Paris in June 1919, he was still using a modular grid and gradated color as the basis of his work. During his first year in France, however, his art underwent a radical transformation; by the end of 1920, he had painted his first genuinely neo-plastic composition, comprised solely from black lines, planes of pure primary color, and planes of "non-color" (white, black, or gray). In the subsequent two years, a period of exceptional productivity, he executed more than thirty paintings using this radically reduced pictorial vocabulary -- approximately one-fifth of his total neo-plastic output. During this time, he also attracted attention from several key figures in the Parisian art world, most notably the dealer Léonce Rosenberg, who published Mondrian's text Neo-Plasticism in French translation in January 1921 and included several of his recent paintings in a well-attended group exhibition three months later. Hans Jaffé has described the present picture as an "outstanding example" of Mondrian's work from this pivotal period, commenting, "The equilibrium of the planes and colors is reduced to the basic elements; over against the three primary colors, which now form a perfect triad, stand the bright white as a non-color and the tautly drawn black lines. The equilibrium is now pre-eminently qualitative, that is, a balance of weights not of dimensions, an equilibrium that from the outset excludes any symmetry" (in op. cit., p. 138).

Scholars have identified two major compositional schemas that Mondrian employed in his neo-plastic work of 1920-1922. In the "central" type, the composition is organized around two dominant lines, one horizontal and the other vertical, that cross near the middle of the painting. These intersecting lines partition the picture plane into four roughly equal compartments, each of which is subdivided in a different way. The second schema is the "peripheral" type, of which the present painting is a canonical example. In this type, the greater part of the canvas is occupied by a square or almost square field of white, set near the center of the picture and bounded on three or four sides by lines and narrow elongated planes. The "peripheral" format first appeared in late 1921, in a painting entitled Composition with Red, Blue, Black, Yellow, and Gray, now in the Gemeentemuseum, The Hague (fig. 1). Mondrian was evidently pleased by the possibilities of this new schema and continued to experiment with it throughout 1922, executing at least nine variations on the prototype (Joosten B134-139, 141, 145-146). Of these, the present painting is one of only three that remain in private hands. The other six are in major museum collections: Solomon R. Guggenheim Museum, New York; Minneapolis Institute of Arts; Toledo Museum of Art; Nationalgalerie, Berlin; Staatsgalerie, Stuttgart; and Stedelijk Museum, Amsterdam (fig. 2).

The dominant feature of the "peripheral" compositions is the white square in the center of each canvas. John Milner has observed, "The device of 'framing' the central area...isolates a white, square plane, as if to present its empty perfection; attended or supported by other planes, it adjusts its rhythm by its setting and by articulating its asymmetrical position in relation to the canvas edge. The square is the focus of attention and asserts its primacy as a positive visual fact. The white is in effect pushed forward by this device, made into a positive plane and not mere empty space. It is a presentation of the square. As with the church tower, the large mill, the tree and even the sea [from his work of 1908-1914], Mondrian essentially painted one subject. Formerly a single observed motif, it is here a geometric shape presented for its balanced, generic, rhythmic and proportional purity" (in Mondrian, New York, 1992, pp. 166-167).

Another significant element of the paintings is the interaction between the central square and the lines and planes surrounding it. Analyzing the complete series of "peripheral" compositions from 1921-1922, Yve-Alain Bois has written, "Two concurrent strategies compete with each other. First, a strategy within each painting: a large square of non-color, central but not centered, governs the surface of the canvas (an almost-square vertical rectangle), but every side of the contained square acts differently. Each of the lines demarcating the square enters into a different syntactical relation with the plane(s) that it defines along the parallel edge of the picture. This sets in motion a system of weights and counterweights that prevents the constitution of the square as a stable figure. Second, there is a strategy that operates within the series: on the one hand, the slightest change in the chromatic order alters the identity, the particularity, of the picture; on the other had, the simple reversal of the composition proves that the pictorial field is not isotropic, that the top and the bottom, the right and the left (because we are human, as Mondrian would say), don't have the same value for us, and are not interchangeable" (in Piet Mondrian, exh. cat., National Gallery of Art, Washington, D.C., 1994, pp. 346-347).

The present version of the composition is particularly noteworthy for its distinguished provenance. It is the only work by Mondrian ever owned by the Dutch painter and theorist Theo van Doesburg, founder of the periodical De Stijl and Mondrian's closest intellectual companion during the formative years of his mature style. Mondrian first met van Doesburg in October 1915, when the latter published enthusiastic praise for Mondrian's recent work in the small Dutch weekly Eenheid. The two artists then began an intensive correspondence about aesthetic and ideological issues, which lasted for more than six years and had a vital impact on the development of Mondrian's art and theory. Mondrian published his first theoretical treatise, Neo-Plasticism in Painting, in the inaugural issue of De Stijl in October 1917 and played a leading intellectual role in the magazine throughout the early years of its existence. Carel Blotkamp has observed, "Mondrian's regard for van Doesburg was undoubtedly based on his phenomenal abilities as an organizer and stimulator, as well as a writer and theorist. Van Doesburg was a man of inexhaustible energy, who made friends as easily as enemies; he had an agile mind, and was quite well-read in different areas of science and the arts. The manner in which he familiarized himself with Mondrian's ideas, supplementing them with new elements, must have given Mondrian the pleasurable feeling that he was no longer a voice crying in the wilderness: the ideas on art that had taken him years to develop were finally beginning to bear fruit" (in Mondrian: The Art of Destruction, London, 1994, pp. 95-96).

Van Doesburg spent most of 1923 in Paris in connection with preparations for an upcoming exhibition of De Stijl architecture at Léonce Rosenberg's Galerie de l'Effort Moderne. He was photographed in front of the present painting in October of 1923 and had probably acquired it from Mondrian by this time (figs. 3). The following year, personal and artistic differences led to a permanent rift between the two artists. Van Doesburg's flamboyant and aggressive personality had proven to be a poor match for Mondrian's own introverted character and quiet lifestyle. In a letter dated August 1924, Mondrian announced that he no longer wished to receive van Doesburg at home: "It has become clear that we are not suited to a daily contact with one another. As long as we corresponded with each other, it was all right. Let us agree to write when we feel it is necessary, or perhaps send a card in order to arrange a meeting at the [café] Dome" (quoted in ibid., p. 191). Mondrian was also dismayed by van Doesburg's introduction of the diagonal line into his work, which he viewed as a breech of neo-plastic principles. He withdrew his support from De Stijl, explaining to van Doesburg, "After your arbitrary correction of Neo-Plasticism, any collaboration, of no matter what kind, has become impossible for me. I regret that I cannot prevent publication of my photos and articles in the current numbers of De Stijl. Beyond that, no hard feelings" (quoted in M. Seuphor, op. cit., 1956, p. 149).

(fig. 3) Theo and Nelly van Doesburg in front of the present painting, October 1923.