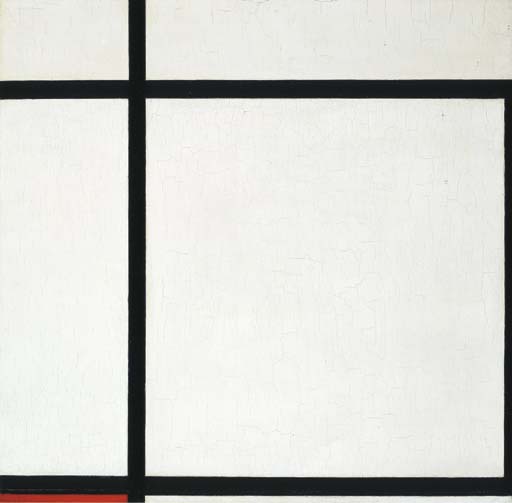 Consisting solely of four straight lines and one primary colour on a white background, Composition II, with Red is an important and highly minimal work painted by Mondrian in Paris in 1926. As Michel Seuphor has recalled of this time, "the year 1926 was important in Mondrian's life", in that in many ways it marked a turning point for the artist, signalling the end of his association with the de Stijl movement and the beginning of a new and more independent identity.

It was possibly a consequence of Mondrian's break with Van Doesburg in 1925, that his paintings of 1926 are distinguished by an ever-increasing reductivism in which the artist pared down even further the sparse pictorial logic the "neo-plasticism" of his paintings to their barest essentials. As a work like Composition II, with Red demonstrates, it was indeed possible to considerably reduce the basic elements of de Stijl and still maintain the integrity of the "neo-plastic" aesthetic.

Composition II, with Red is one of an important group of four paintings often known as the "Dresden paintings", which, painted in 1926, were sent the following year on consignment to the Kunstaustellung Kühl in Dresden. Only this work (also known as Dresden II) and Composition IV with red or (Dresden IV) now in the Kaiser Wilhelm Museum in Krefeld, are still known to exist. Mondrian, who lived in a state of near poverty for much of the early 1920s and was often compelled to paint naturalistic flower-paintings for money during this period so as to fund his less saleable abstract work, had recently begun to find patrons of his work in Dresden. In 1926 Mondrian had been commissioned to design a library-study for a Ida Bienert living in Dresden. At the same time a diamond composition of his, Tableau no. 1 (1925), had also been bought from the Kunstaustellung Kühl by the dancer Gret Palucca who, to Mondrian's delight, had hung the work at a specific place on the large empty wall of her dance studio "as a point of rest for when she takes a break". (Letter from Piet Mondrian to Oud cited in Piet Mondrian Exhib. cat. MoMA, New York, 1995. p. 221).

These commercial successes in Dresden were welcomed by Mondrian not just for the much-needed money they brought in, but also for the fact that they seemed to reflect the public's growing understanding of his work as a bridge between art and architecture. Mondrian saw his paintings not as mere objects but as architectural statements that posited new ideas about the nature of form and space that could and, he hoped one day would, be integrated into the structure of the life of "future man". As a response to his quest for an absolute, for Mondrian, his painting had to both respond to and interact with the modern environment in which it was created. In this respect, of course, most importantly, art had to respond to the metropolis. "The truly modern artist", he wrote, "sees the metropolis as a formal equivalent of abstract life; it is closer to him than nature and gives him a stronger feeling of beauty. For, in the big city, nature has already been constrained and ordered by the human spirit. The proportions and rhythms of architectural surfaces and lines speak more directly to the artist than do the whims of nature; henceforth, the big city is where the artistic-mathematical temperament of the future will develop, the place from which the New Style will emerge." (cited in Serge Lemoine Mondrian and de Stijl London, 1987, p. 30.)

In accordance with these sentiments Mondrian saw his paintings as working towards the end of easel painting. The formal and spatial principles they extolled should, he believed, be extended beyond the picture frame into life. To this end he himself put these principles into practice in the arrangement of his own living space. In his studio at 26 Rue du Départ in Paris, he covered the white walls with coloured cardboard shapes arranged, like his paintings, in accordance with Neo-plastic principles. He painted all the objects in the studio - the few pieces of furniture he had and his treasured gramophone player - in primary colours in order to create what he described as " a new design for living". In order to propagate this utopian message of his art as a blueprint for the future, in 1926 he had a series of photographs taken of this studio which he published as widely as the reproductions of his paintings. Forming the centrepiece of one of these photographs is a now lost work that bears a very close resemblance to Composition II, with Red. A complete and persuasive integration of his painted work into its environment this photograph is a powerful illustration of the way in which Mondrian believed the principles of his art could be extended into life. It is a pictorial manifesto of his belief in the total work of art.

Founded on a 20 inch square canvas Composition II, with Red is a deceptively simple work that stands like a cornerstone of Mondrian's art. Reduced to the most simple and essential of elements its harmoniously resolved composition creates a tension and dynamism with only the barest of means. In this it articulates the principles of Neo-Plasticism which, with the help of Michel Seuphor, Mondrian had painstakingly translated into manifesto form in 1926, exhibiting all the non-symmetrical balance between form and space and between the notion of "mind and material" that Mondrian had here demanded of art. "Balance through the equivalence of nature and mind, of that which is individual and that which is universal, of the feminine and the masculine - this general principle of Neo-Plasticism can be achieved not only in plastic art, but also in man and society, Mondrian had asserted. "In society, the equivalence of what relates to matter and of what relates to mind can create a harmony beyond anything hitherto known." ("The General Principles of Neo-Plasticism", 1926, cited in M. Seuphor, Mondrian. Life and Work, London, 1956, p. 168.) In reducing the language of his art to its finest point, Mondrian was also fiercely demonstrating the power of the painterly system he had devised to articulate form and space. He did this however not out of a sense of personal pride but out of a sense of mission. 'To be concerned exclusively with relations, while creating them and seeking their equilibrium in art and life, that is the good work of today, that is to prepare the future" (ibid).

After being consigned to the Kunstaustellung Kühl in Dresden, the whereabouts of Composition II, with Red were unknown, until 1944, when the work was back in Mondrian's possession and where it was photographed in his New York studio. As it did not feature in Mondrian's 1942 exhibition, it seems most likely that it was only after this date that it was returned to the artist. In 1960 it was sold from the Mondrian estate to the Sidney Janis Gallery in New York.