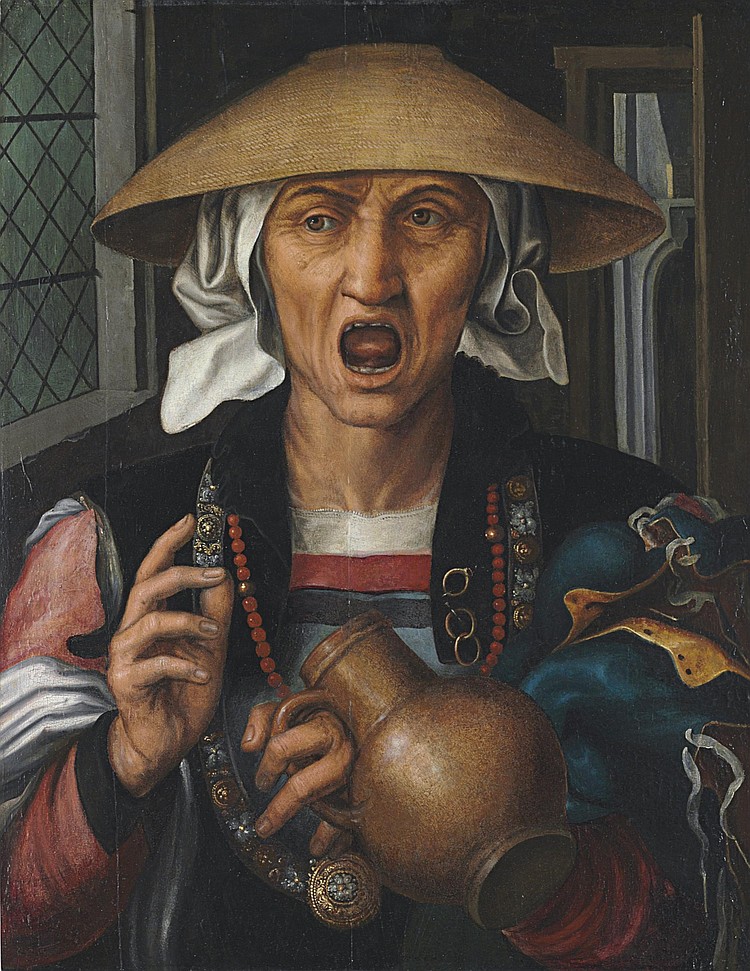 Pieter Huys was a painter and engraver who became a master in the Antwerp Guild of Saint Luke in 1545. Stylistically, he falls within the orbit of Hieronymous Bosch, whose work remained popular and influential through the sixteenth century. Thematically, Huys favored moralizing scenes with layers of symbolic meaning, such as the present Woman Enraged, an allegory of Anger and Avarice.

The Woman Enraged has a number of elements in common with Huys' The Bagpiper of 1521, in which the male and female subjects convey a cautionary message about the results of overindulgence. The man, grimacing in an expression of anger similar to the woman in the present painting, clutches a deflated bagpipe and an empty purse - both with obvious sexual overtones. His female companion, meanwhile, brandishes an empty wine jug, which is symbolic of both the wine that has been consumed and her own unmet sexual needs. An inscription above the figures records the lessons to be learned.

In a similar manner, the present painting lays out for the viewer a warning against anger and greed, with its unusual grouping of symbols and meanings. The woman's open-mouthed expression is indicative of her fury, while a fireplace in the house beyond may also be suggestive of passion and rage. It is her odd assortment of garments, however, that is most curious. Her white headdress and underblouse, red and blue bodice, and red sleeves pinned at the shoulder are similar to the costume worn by the woman in The Bagpiper. The straw hat is an outdoor type, typically associated with peasants. And the heavy gold and silver chain, rosary beads, and black velvet robe would appear to be those of a wealthy woman. In addition, she holds over one arm another elegant blue and yellow garment, while clutching an empty jug. Interpreted as a whole, these incongruous details add up to a description of avarice. The enraged woman's greed extends not only to physical possessions such as the clothes and jewelry, but also to gluttony for wine and, as in The Bagpiper, a sexual appetite. Frustrated and unsatisfied, she yells out in anger.

Anger and Avarice - and, for that matter, Lust - are Deadly Sins, a favorite topic for artists from Huys' era. Pieter Brueghel the Elder, for instance, produced a series of The Seven Deadly Sins for the print medium which first appeared in 1558. Brueghel's Dulle Griet, circa 1562, likewise depicts an enraged and avaricious woman, in this instance descending past the gates of Hell in search of material possessions. It is worthwhile to observe that allegories of the Vices from this period frequently feature women, and in fact at the time women were believed to be both morally and intellectually inferior to men and thus more apt to succumb to their baser instincts.

The Scholars Eye: Property from the Julius Held Collection Part I