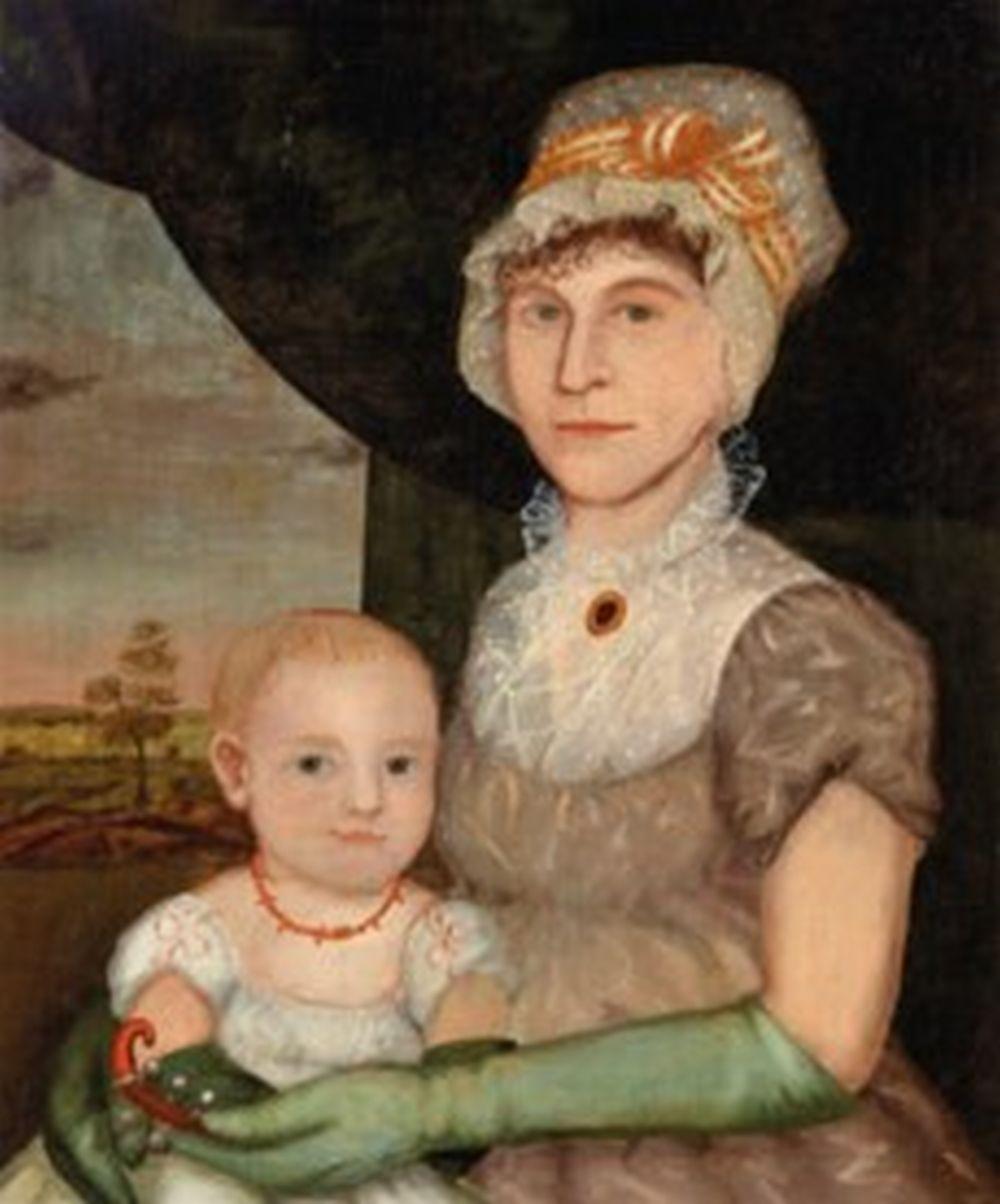 Provenance: Kennedy Galleries, Inc., New York, 1965 Kennedy Galleries, Inc., New York, 1969 Robert M. Hicklin, Jr., Spartanburg, South Carolina, 1980 Dr. and Mrs. Edward Hoffman, Baltimore LITERATURE: Kennedy Galleries, Inc., Recorders, Deceivers and Dreamers, Kennedy Galleries Quarterly, vol. 5, no. 2 (January 1965), pp. 92-93, no. 91. Kennedy Galleries Inc., American Primitives, Kennedy Galleries Quarterly, vol. 9 (December 1969), pp. 173, 222, no. 147. The Magazine Antiques (September 1980), p. 397. Frick Art Reference Library, ref. 124-6J. Bearing a close resemblance to the works of Joshua Johnson (c.1763-after 1824), this striking portrait of a mother and child may illustrate the hand of the renowned mixed-race artist. However, several details diverge from Johnson’s known practices, suggesting that it is either an anomalous example of his oeuvre or the work of another portraitist familiar with Johnson’s style. In 1948, Dr. John Hall Pleasants, who first identified the artist, noted the characteristics of his work, including subjects drawn in the same stiff manner, with eyes directed staringly forward, a mouth tightly drawn, and an expressionless hand [holding] some object (J. Hall Pleasants, An Exhibition of Portraits by Joshua Johnston (The Peale Museum, 1948), n.p.). All these aspects are seen in the portrait offered here and additional details in the execution of the faces and clothing support an attribution. The woman’s lips are separated by a uniformly solid dark line that extends the entire width of the mouth, a device that appears with considerable frequency in Johnson portraits (for an example, see the portrait of Emma van Name illustrated in Carolyn J. Weekley, Stiles Tuttle Colwill et al., Joshua Johnson: Freeman and Early American Portrait Painter (Baltimore, 1987), pp. 127-128, no. 32). Furthermore, the woman’s pronounced oval-shaped chin has similar contours to those in a portrait of a Lady with a Fan with an unconfirmed attribution to Johnson (Kennedy Galleries Inc., American Primitives, Kennedy Galleries Quarterly, vol. 9 (December 1969), p. 180, no. 155). The gauzy fabric of the lady’s fashionable bonnet and bodice is embellished with somewhat regularly placed white dots and appear to be applied in a similar method on the outer layer of Emma van Name’s dress. Furthermore, the neckline of Emma’s dress is edged by a series of short dashes, as is that on the baby in the portrait offered here. The rendering of the woman’s hair and other aspects of her dress, however, show a divergence from Johnson’s known practices. Her rather unruly hair is composed of relatively few, irregular and wide brush strokes. While many of Johnson’s female subjects have neatly coiffed hair styles, Sara Ogden Gustin’s portrait shows a similar array of curls protruding from her headscarf. However, her curls are more uniform in size and delineated with a multitude of fine brush strokes (Weekley and Colwill, pp. 102-104, no. 4). In similar fashion, the detailing of the woman’s bodice and the folds of her dress are executed with haphazard, hastily applied strokes and contrast with the more fastidious technique favored by Johnson (see for example, Johnson’s portrait of Grace McCurdy and her daughters, Weekley and Colwill, pp. 135-136, no. 41). There were numerous artists working in Baltimore during the late eighteenth and early nineteenth centuries and while the portrait cannot be readily ascribed to any of these, there is a similarity to portraits by Jacob Frymire (1770-1822). In Frymire’s likenesses of William Washington Black and a Lady with a Book, the artist has depicted unruly locks of hair akin to those on the woman in this portrait (Winterthur Museum, acc. no. 1984.0006 A; Butterfields, December 12, 2001, lot 5010). The portrait first appeared in the marketplace in 1965 when it was unattributed and its sitters described as Woman and Child Wearing Green Gloves. Four years later, the same gallery published the work with a similar title but this time attributed it to Joshua Johnson. In 1980, a label of Robert M. Hicklin, Jr., the then-owner of the portrait, on the reverse of a stretcher identifies the sitters as Mrs. Jacob and Sarah Rutter. A Jacob Rutter has not been found in the genealogical record in Baltimore at this time and the basis for this identification is unknown, but Johnson did paint members of the Rutter family. In 1804, he painted a double portrait of Edward Pennington Rutter (1798-1827) and his sister Sarah Ann Rutter (1802-1843) and there is a discernible family resemblance to the baby in the portrait offered here (Weekley and Stiles, pp. 121-122, no. 26). They were the children of Josias Rutter (1775-1861) and his wife, Mary Pennington Rutter (1778-1850). Josias is mistakenly referred to as Joshua in several accounts and if he was also erroneously referred to as Jacob, it is possible that this portrait depicts Sarah Rutter at the age of about one with her mother, Mary. Another possibility is the family of Josias’ brother, John Rutter (1766-1806), who also had a daughter named Sarah. In this case, the green-gloved sitters would be John’s wife, Elizabeth (Askew) Rutter (1769-1838) and their daughter Sarah Rutter (1796-1856) depicted in about 1797. For more on Joshua Johnson, see lots 117 and 122. 38