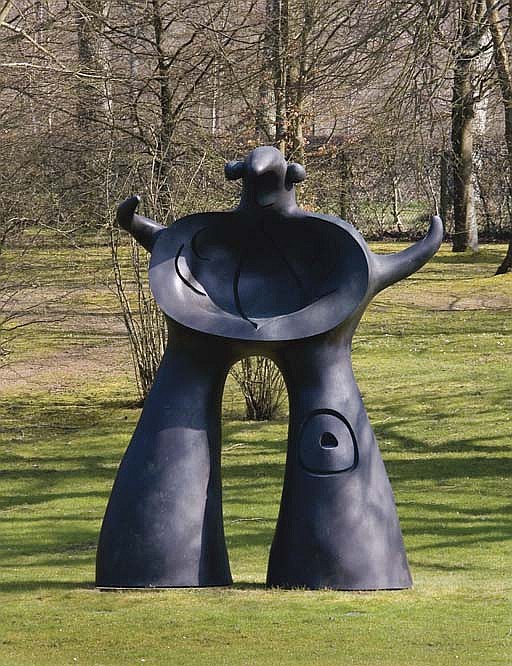 
The title of this wondrous, life-affirming sculpture, Projet pour un monument, as listed in Emilio MirÃ³ and Pilar Chapel's recent catalogue raisonnÃ©, may give an understated impression of this work's massive scale. Measuring nearly twelve-and-a-half feet tall, it is among a half-dozen or so of MirÃ³'s largest works in three dimensions. There is no larger version of this sculpture; if one had been intended, none was actually cast. This is the monument itself. It is also known as Grand personnage, which is perhaps a more fitting title for this gargantuan Ubu-esque figure.

She could easily be MÃ¨re Ubu; MirÃ³ often delighted in depicting the characters in Alfred Jarry's 1896 farcical play. The artist gave this title to a smaller figure done in 1975 (MirÃ³ and Chapel, no. 333), which shares some of the features seen in the present sculpture. In any case, this grand personnage is certainly female. She wears emblazoned on her torso the typically MirÃ³esque emblem of her sex. Her upper body is concave and womb-like. She carries her breasts on her back. She bestrides the space she occupies atop a pair of ponderous, elephantine legs, one of which is adorned with a single Cyclopean eye. She is a monstrous neolithic fertility goddess seemingly come to life. She would wreak havoc, crushing anyone in her path, if she could walk.

Although MirÃ³ had created surrealist painting-objects during the late 1920s and 1930s, it was not until a decade later, while he was living in Palma, Montroig and Barcelona during the Second World War, that he considered making free-standing sculptures. He wrote in his Working Notes, 1941-1942, "it is in sculpture that I will create a truly phantasmagoric world of living monsters; what I do in painting is more conventional" (in M. Rowell, ed., Joan MirÃ³: Selected Writings and Interviews, Boston, 1986, p. 175). He began to create sculptures as a further development in the ceramic objects he was making in collaboration with Josep Artigas. The possibility of undertaking larger and more imposing sculptures became a reality when MirÃ³'s "big studio," about which the artist had dreamed for years, was finally built in 1956, in Palma.

Dupin has mentioned, in the recent editions of his comprehensive monograph on MirÃ³, how he had initially looked upon the artist's sculptures as works created in conjunction with his better known achievements in painting, collage and ceramics. However, he eventually revised this view, in light of the scope and scale of the artist's later work in bronze:

"The sculptures from the last two decades of MirÃ³'s productive life took on a broad place and force For MirÃ³, sculpture became an intrinsic adventure, an important means of expression that competed with the canvas and sheet of paper--the domains and artistic spaces proper to MirÃ³--without ever simply being a mere derivative or deviation from painting. MirÃ³'s approach and conception of sculpture offered him an immediate contact with a reality that, in painting, was attainable through the screen of an elaborately constructed language.

"MirÃ³ had formed the desire to leave the laboratory behind, to go beyond easel painting for the sake of a new space, and more impersonal sites, less confined and protected than those of the studio. He dreamt of the street, public squares, gardens and cities. Just as he had always sought to transgress painting, he now sought to transgress his own work, to cross over the boundaries of walled galleries and museums. He wanted to address his work to anonymous crowds, to the unknown viewer One starts off by modeling a figurine in clay and winds up erecting a city monument" (in MirÃ³, Barcelona, 2004, pp. 361 and 367).

The grand personnage in Project pour un monument did in fact begin as a table-top sized figurine. Its lineage goes back even further than that, to the creatures in the celebrated series of Constellations (fig. 1) which MirÃ³ painted in 1940-1941, and in the forty lithographs of the Barcelona Series, completed in 1944. He created a moderately sized bigfoot Femme in 1949 (M. and C., no. 37; fig. 2), and at three times the height and clad in a skirt, Femme debout, in 1969 (M. and C., no. 138). In 1972 MirÃ³ returned to the 1949 Femme, creating a maquette and a large polychrome synthetic resin sculpture he titled Personnage (M. and C., nos. 266 and 267). Later that year the artist executed a ceramic sculpture titled Projet pour un monument, and cast from it a unique example in synthetic resin, 20 inches tall (M. and C., no. 268; fig. 3). He created two more unique Projets pour un monument, in the same height, in painted synthetic resin during 1972 (M. and C., nos. 269 and 270).

MirÃ³ then laid aside the idea, and let seven years elapse before he cast a painted bronze version of Projet pour un monument, in an edition of eight, in 1979 (M. and C., no. 271). The "monumental" Projet pour un monument, the present sculpture, was realized a couple of years later, in 1981. Dupin lists an edition of four casts numbered 1/4-4/4, plus one artist's proof designated E.A 1. Of the other casts in this edition, no. 1 is in a private collection, no. 2 is with Galerie Gmurzynska, Cologne, and no. 3 was acquired by the Kimbell Art Museum, Fort Worth. MirÃ³ donated his artist's proof to the city of Milan in 1982, the year before his death. Dupin has written:

"When the bronze has melted, cooled and been delivered from its plaster womb, what are these figures that stand before us? Difficult to identify, despite their affirmation and because of their intensity. Neither men nor beasts, nor monsters nor intermediate creatures, but with something of all of these. Their aggressive presence is a blend of the grotesque and the incongruous, of predatory fascination and the artlessness of the primitive game. The unfailing laughter of these creatures freezes before bursting out; it is in us, beyond us, that it tears the walls and the sky. We feel its commotion as it passes, its charge of dynamite in suspense and a sinking of the ground under its passage, a trembling in the air, a tumult of freshness" (in MirÃ³ as Sculptor, Barcelona, 1976, pp. 25-26).