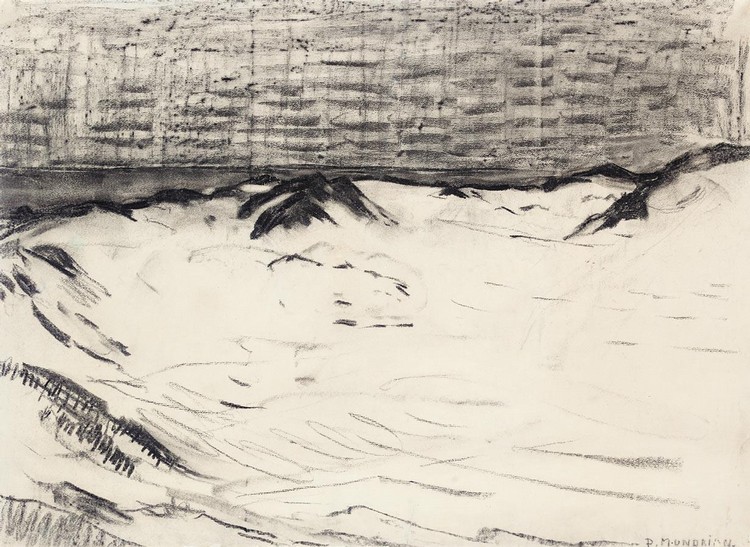 The present work is a remarkable example of Mondrian's views of dunes and seascapes of Zeeland, a group of paintings and drawings executed between 1909 and 1912, during the artist's visits to the village of Domburg on the Dutch coast. Whilst some of the works from this series represent a view of the shore, others, like the present drawing, focus on the dunes, with a glimpse of the sea towards the left of the composition. Mondrian first visited Domburg for a period of two weeks in the autumn of 1908, and returned there in June of the following year, when the present work was most likely executed. Fascinated with the surrounding landscape, Mondrian's production in Domburg focused on four subjects: the Domburg church, the lighthouse, the dunes and the sea shore. It was in his treatment of these themes that he developed his divisionist and fauvist style, and this group therefore presents an important step on the artist's way towards pure abstraction. In contrast to the broad brushwork of the oil paintings from this series, the present work, which is one of the most notable work on paper executed at Zeeland, shows Mondrian's skills as a draughtsman, and his ability to transform the landscape into an elegant, and remarkably modern drawing. Its graceful and assured lines, evoking the undulations of the landscape, are reminiscent of Japonisme, which captured the imagination of so many European artists at the turn of the century.

Commenting on this series of works, Hans L. C. Jaffé wrote that 'it was largely the motif of the dunes along the Dutch coast that inspired Mondrian during his Zeeland period to a new flight of his pictorial imagination. This dune theme was something new to him, virtually the first appearance in his work of nature in its vastness and all-encompassing magnitude. To be sure, Mondrian had always been a landscape painter, but the subject of the nineteenth-century Dutch paysagist was never nature in the sense of unspoiled creation, of forms and vistas scarcely touched by man [...] Not until he reached the island of Walcheren did Mondrian encounter nature in its endless breadth, which the Netherlands possesses only at the shore, along the line of dunes. This new experience made a deep impression on the artist, as can be seen from the series of studies he made at that time on the theme of the dunes and the sea' (H. L. C. Jaffé, Mondrian, London, 1970, p. 88).

Fig. 1, View of the dunes near Domburg