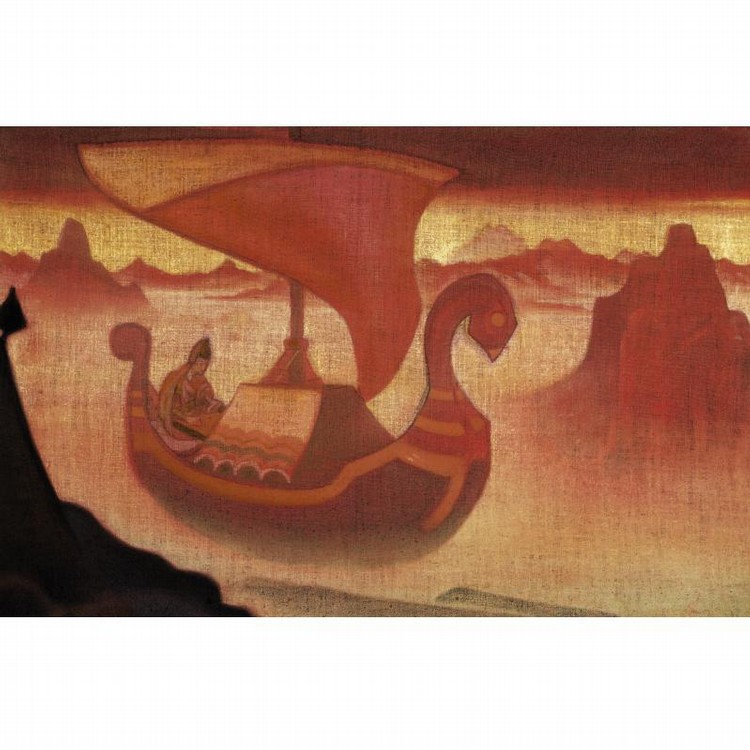 Descended in a private collection, The Unknown Singer appears on the market for the first time in eighty-five years. Roerich executed the painting in England in 1920, and by 1924 it was featured in a Corona Mundi publication on Roerich's work (see fig 1).

The Unknown Singer belongs to a series of paintings in which Roerich explores the spiritual journey of man. The poem that accompanies the work was published in Tsvety Morii or The Flowers of Morya in 1921. This small volume featured sixty-four poems written by Roerich between 1907 and 1921. As Irina H. Corten explains, a select number of the poems "appeared previously in pre-revolutionary Russian periodicals such as Vesy and Zolotoe Runo [Golden Fleece]. But because of the political and social upheavals in Russia in the 1920's, the book went unnoticed and was not rediscovered until much later. In 1974 the collection of Roerich's poems was first published in the Soviet Union. It bears the title Pis'mena which in modern Russian means hieroglyphics or any kind of old script. The term was originally used by Roerich when he was preparing the poems for publication; it suggests that the poems contain messages of ancient wisdom." (Irina H. Corten, The Theme of Spiritual Pilgrimage in the Poetry of Nicholas Roerich, 1986).

The poems describe the universal story of a hero, a Campbellian archetype, whose journey may be understood by every culture. The Unknown Singer belongs to the second cycle of poems in which the hero, although still a novice, has gained certain clarity and direction abetted by sacred signs. Firmly ensconced in his boat, our hero sails along the river of discovery. As Irina Corten points out, "water stands for purification and renewal. Rivers, which flow in a specified direction, suggest transition and movement toward a goal. A lake, especially in Indian literature, is often used as a metaphor for self-reflection and revelation, and the ocean represents the universe" (ibid.).

Every morning an unknown singer sails by our shore
And it seems to us that we
shall never learn
who that singer is,
and where he goes each morning.
And for whom he sings
his ever new song

Focused and chosen to be one of God's messengers our hero is en route to enlightenment. In Campbellian terms, once he reaches the "innermost cave," and is able to endure the tribulations ahead, he will be transformed and return to the world with an enlightened state of spiritual consciousness. For Roerich, this awareness of eternity engendered a new spiritual journey.

We would like to thank Daniel Entin, Director of the Nicholas Roerich Museum, New York, for providing additional catalogue information.