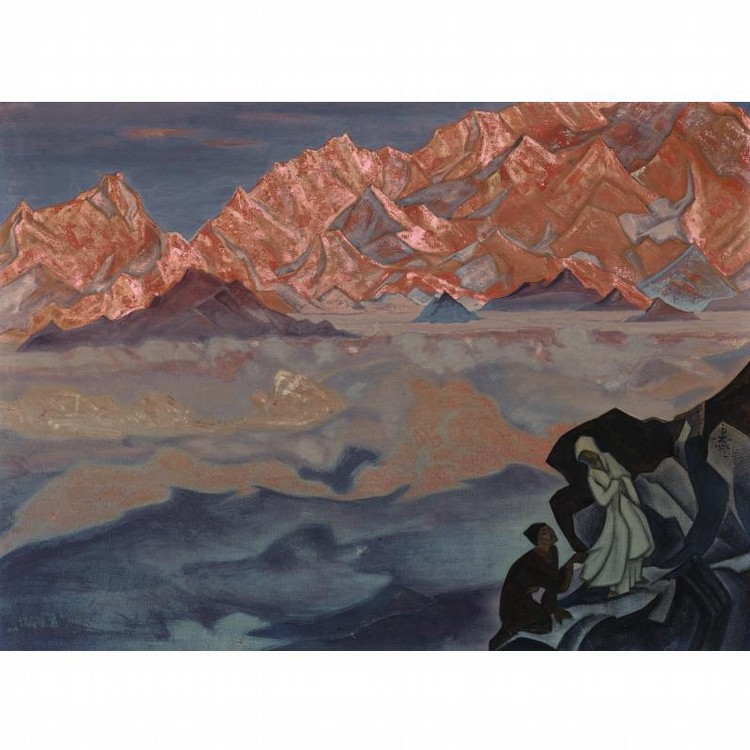 PROPERTY FROM A PRIVATE COLLECTION, NEW YORK NICHOLAS ROERICH RUSSIAN, 1874-1947 SHE WHO LEADS

Nicholas Roerich was an accomplished painter, draughtsman, theater designer, philosopher, poet and writer. He is the only Russian artist to have a museum in the United States dedicated to his art and legacy.

Nicholas and his wife Helena Roerich traveled to India in 1923 where they embarked on a rigorous expedition through Chinese Turkestan, Altai, Mongolia and Tibet so as to gain knowledge of the various religions, customs, and languages. Roerich was an inveterate traveler, explorer, anthropologist and historian, and documented this expedition in his book Heart of Asia. Roerich produced over 500 paintings of this journey, and these magical works were greatly informed by his interest in Eastern religion and philosophy. The mountains held a special fascination for the artist, who exclaimed, "Mountains, mountains! What magnetic forces are concealed within you! What a symbol of quietude is revealed in every sparkling peak! The legends of the greatest valor are conceived near mountains. The most human words find outlet on Snowy heights." (Nicholas Roerich, Altai-Himalaya, p. 8). Nina Selivanova noted that the "wonderful dynamic of the mountain gave still greater scope to the artist's [Roerich's] imagination, revealing never repeated beauties of structure, of colors, of extraordinarily varied moments." Indeed, Nicholas Roerich's final years (1936-1947) were spent in Nagar, where he continued to paint atmospheric Himalayan scenes.

She Who Leads is an exciting rediscovered painting from a private collection. It has not been seen by the public since the 1930s. The work belongs to Roerich's "His Country" series, a version of which may be found in the Nicholas Roerich International Centre-Museum in Moscow. Jacqueline Decter points out that "while in Sikkim, Roerich painted a series of works entitled "His Country," which was inspired as much by the physical grandeur of the Himalayas as by the spiritual mysteries harbored within them. Indeed, for the artist these towering peaks represented the very summit of beauty and spirituality..." (Jacqueline Decter, Nicholas Roerich, the Life and Art of a Russian Master, London: Destiny Books, 1989, p. 141). She Who Leads is one of a number of Roerich paintings that celebrates the power of female dieties, Madonna Laboris, and The Mother of the World, are two additional examples. As Helena Roerich wrote to a friend in 1937, "...woman should realize that she herself contains all forces, and the moment she shakes off the age-old hypnosis of her seemingly lawful subjugation and mental inferiority and occupies herself with a manifold education, she will create in collaboration with man a new and better world... Cosmos affirms the greatness of woman's creative principle. Woman is a personification of nature, and it is nature that teaches man, not man nature. Therefore, may all women realize the grandeur of their origin, and may they strive for knowledge" (published in Letters of Helena Roerich 1935-1939, vol. II).

We would like to thank Daniel Entin, Director of the Nicholas Roerich Museum, New York, for providing additional catalogue information.