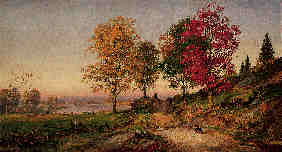 dated "J.F. Cropsey 1879" (lower right) oil on canvas 24 x 44 in. (61 x 111.7 cm) painted in 1879 provenance Christie~dq~s, New York, December 1, 1989, 55 Henry D. Ostberg, New York, 1989-1992 M. Altman & Co., NEW YORK Hirschl & Adler Galleries, new york In 1879, Cropsey was at the height of his artistic powers. His finances, however, were in steady decline. Like the other second-generation exponents of the Hudson River School aesthetic, Cropsey saw a dramatic decrease in sales after the conclusion of the Civil War in 1865. By the later 1870s, American collectors had begun to shift their attention to more cosmopolitan aesthetics, particularly those in vogue in Europe. As patrons forsook their long-standing aesthetic nationalism, the latter-day Hudson River School painters struggled to make ends meet. Cropsey was one of several landscapists to have moved out of New York City during the 1860s, while times were good. He used his training as an architect to design Aladdin, his dream home, in Warwick, New York. The family would have been celebrating the tenth anniversary of their home~dq~s completion when the artist painted GREENWOOD LAKE, depicting a nearby vista. Despite the painting~dq~s apparent serenity, it was created during a period of increasing economic concern for Cropsey. Although he continued to produce compelling landscapes throughout the 1870s and 1880s, his work was progressively supplanted in the market by the inroads of European modern aesthetics, particularly Impressionism. GREENWOOD LAKE incorporates several recurrent elements of Cropsey~dq~s mature style: a shady path, a split-rail fence, a pasture, a serene lake, distant mountains, and, most important, fall colors. Cropsey remains perhaps America~dq~s most celebrated painter of autumn, and his reputation is firmly based upon his depictions of that season. He developed an interest in the theme during the mid-1850s, when he painted fall in the context of the annual cycle of seasons. Eventually, Cropsey concentrated his attention on the brilliant palette of fall by itself. In 1860, he created his culminating AUTUMN ON THE HUDSON RIVER (Fig. 1, National Gallery of Art), which remains a landmark in the history of American art. The ambitious composition codified Cropsey~dq~s autumn aesthetic for the remainder of his career, and shares several aspects with GREENWOOD LAKE. As Joshua Taylor has remarked, Cropsey was a painter beguiled by the joys of contemplating landscape, sometimes of one sort, sometimes another, and was little concerned that the world of art was changing around him (Foreword to William S. Talbot, JASPER F. CROPSEY, 1823-1900, exh. cat., The National Collection of Fine Arts, Washington, D.C., 1970, p. 7). Despite his later financial troubles, Cropsey was satisfied by the ample inspiration he found in the American landscape without looking to his younger colleagues for direction. The consistency in his art from 1860 to 1879 speaks to that confidence in his mature style. Autumn in the northeast is, of course, one of the most distinctive and recognizable aspects of the American landscape. By embracing this season as his signature subject, Cropsey signaled his patriotic belief in the nation~dq~s uniqueness. The American identity of his subject was driven home to Cropsey and his patrons by the success of AUTUMN ON THE HUDSON RIVER when the work was exhibited in London. The higher-keyed hues of GREENWOOD LAKE imply a desire to represent the essence of the peak season. Cropsey~dq~s foliage parallels the hyper-realistic sunsets, saturated with cadmium hues, of the contemporary luminist aesthetic (of which he was also a practitioner). The symbolic associations between fall and sunset, in which Cropsey was well versed, bear out this comparison. GREENWOOD LAKE is typical of several prominent examples of the artist~dq~s work from this period in major public collections, including Autumn landscape, 1875 (Fig. 2, Muscarelle Museum at William & Mary, Williamsburg, Virginia) and Autumn in the Warwick Valley, 1883 (Fig. 3, Virginia Museum of Fine Arts, Richmond, Virginia), suggesting that the painting was part of a more concerted effort by the artist to explore other permutations of the luminist palette during his later career. GREENWOOD LAKE~dq~s repetition of pairs constitutes perhaps its most unique aspect within the artist~dq~s oeuvre. Two hunters walk casually toward the viewer along the roadway at the lower right, their relaxed attitude expressing the tranquillity of the scene overall. Above the men~dq~s heads stand two trees, one a rich yellow, the other bright red. Echoing that pair of trees in the distance, along the small peninsula at the lower left, we find two more sets of these trees with precisely the same coloration. The two men stand at the composition~dq~s perspectival vanishing point, with both the roadway and fence radiating outward from there. Despite their small scale, the figures lend a sense of companionship to the work, one that finds a natural equivalency in the landscape itself. We are grateful to Mark Mitchell for cataloguing this lot.