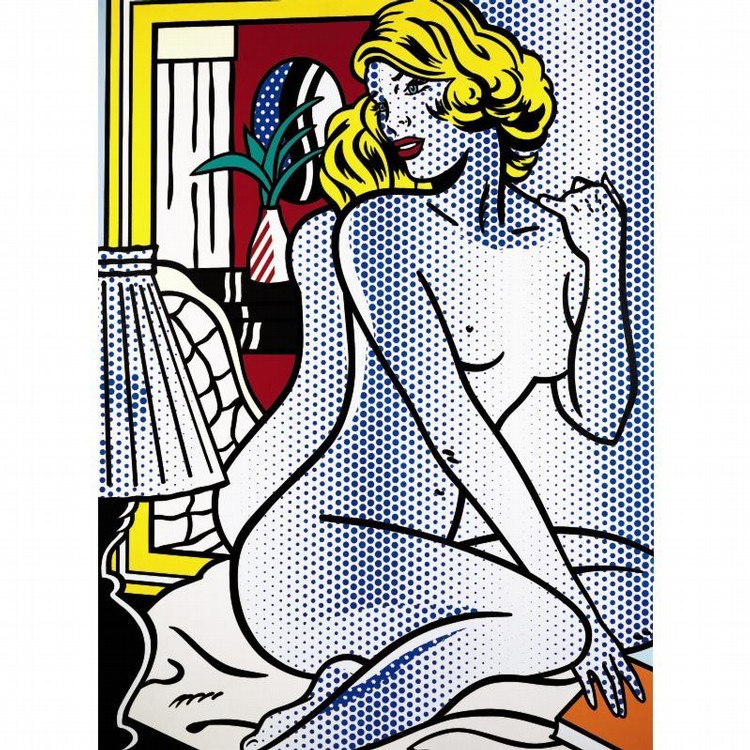 signed and dated 95 on the reverse

oil and magna on canvas

Roy Lichtenstein's majestic Blue Nude is a late masterpiece by one of the brightest lights of the Pop movement. Executed in 1996, the present work represents an extraordinary synthesis of many of the artist's previous concerns, displaying reflections within reflections; mirrors within mirrors, interiors (both real and reflected) configured as a Still Life, as well as a monumental depiction of a sassy female nude that, in her sexy pose and coy expression, recalls the artist's earlier leading ladies from his Cartoon paintings. In its construction, too, does Blue Nude quote the triumphs of the past. This complex composition positively vibrates with life: the product of a nexus of the most graphic of visual sensibilities with a delight in unadulterated color. The older Lichtenstein got, the more he seemed to challenge himself; thus, the present composition betrays a spatial dynamic that takes time for the viewer to negotiate. The flatness of the surface remains constant, but the journey we take to grasp any sense of meaning takes a little longer (and, indeed, is a little more rewarding).

Dominating the painting is the large female figure; her blond, wavy bob spilling out over her slender neck, thus drawing attention to her highly attractive, naked torso, arms and legs. Her arched back and hair are reflected in the mirror behind her, causing a double delineation of her body. The two outlines of the same back meet at the top of the figure's hips, as if to evoke a highly rotund posterior for the female nude, not too far removed from the visual device Picasso would employ when depicting the same subject matter. There are countless source materials for this figure, most of them being old cartoons, so that Lichtenstein, at the end of his life, created paintings in much the same way he had thirty-five years before. However, unlike in the past, the present figure is an amalgamation of several sources. Her hair from one cartoon strip; her pose (with the strong diagonal being formed by her arm) from another. In any case, she certainly evokes the sexy cartoon characters of the past.

The most direct comparison one can make with Blue Nude is with Lichtenstein's own Interiors, made from 1991 until his death in 1997. These monumental canvases displayed living spaces (be they kitchens, living rooms, bedrooms) which he purloined from the Yellow Pages. In these paintings Lichtenstein began to quote his earlier production, displaying his earlier paintings hanging on the walls of his new Interiors. Such is the case here, where Lichtenstein shows an oval Mirror in the reflected background of the composition. In turn, the yellow frame of the mirror that effects the reflection evokes Lichtenstein's famous self-portrait with a mirror instead of his head as well as the series of paintings depicting the back of canvases. Indeed, the logic of 'reflections' permeates not only this work but the whole of Lichtenstein's canon - a body of work predicated on the nature of reality and illusion. He has employed mirrors, windows and other reflecting surfaces as subject matter to afford him the opportunity of exploring the rich, complex interaction between light, object, Image and Index. In a sense, Lichtenstein's oeuvre can be seen as a mirror held up against society: an analogue for the way we live and the objects with which we both surround and comfort ourselves. Likewise, the palpable qualities of objects that physically reflect represent only one layer of Lichtenstein's multi-faceted approach to this 'subject'. 'Reflecting' can also be 'looking back'; delving into the past to make some sense of the present, as made clear in the artist's return to several favored subjects within the same composition.

Primary colors of yellow, red and blue prevail on the surface, built up, yet simultaneously broken down through Lichtenstein's employment of Benday dots and stripes. The simplicity of his technique lends his works he has engaged with a fresh vitality, as if, through Lichtenstein, their voices can be heard once more. Indeed, Lichtenstein had made works in the early 1960's, which were interpretations of works by Picasso. His idea of making 'art about art' was thus not new, but in this painting, his technique and concept has become more programmatic and dedicated. Working in concert with these structurally strong lines and graduated succession of Benday dots (to evince a sense of atmosphere, as successfully employed in the series of Chinese Landscapes) is a more descriptive, curvilinear line that powerfully evokes a sense of bodily flesh or the softness of a plump cushion. The vertical thrust of the Benday dots acts as a veil of color over the surface, lending dimensionality to the figure's body as well as to the lampshade. This device, of course, is highly abstracted by the artist - the color blue is alien to human flesh, and the fact it equates the human figure, with the wall behind her as well as the lampshade, further problematizes any security of image. Blue Nude is a work that delights as a composition in a Structuralist flux, both physically as an object and intellectually as a group of Signs and Signifiers. This reminds the viewer that, in the final analysis, what we look at it is only a painting made up only of dots and lines. The mirror, the mirror frame, the objects and their reflections, as well as the female nude herself all become one object - simply the painted canvas.