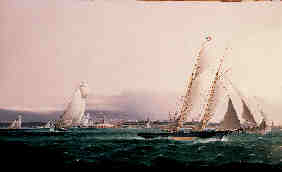 Property from the estate of glen s. foster JAMES E. BUTTERSWORTH (1817-1894) new york from the Bay

signed "J.E. Buttersworth" (lower right) oil on canvas 217/8 x 36 in. (55.6 x 91.4 cm) painted circa 1878 provenance Christie~dq~s, new york, December 4, 1987, Property from the Estate of Katherine Matthies, 7 Glen S. Foster, new york Literature Richard B. Grassby, Ship, Sea & Sky: The Marine Art of James Edward Buttersworth, new york, 1994, p. 93-94, (illustrated in color p. 93, pl. 28) John Parkinson, Jr., The History of The new york Yacht Club, new york, 1975, vol. I, pp. 87-88 W.P. Stephens, Traditions and Memories of American Yachting, Camden, 1981, pp. 29, 32, 275 James Taylor, yachts on canvas: artists~dq~ images of yachts from the seventeenth century to the present day, london, 1998, p. 81 (illustrated in color) Butterworth~dq~s depiction of New York Yacht Club schooner Resolute reaching on a brisk autumn afternoon is an artistic tour de force. Resolute, built by David Carll of City Island, New York, and owned by A.S. Hatch, appears to be sailing off the canvas as the following schooners and sloops engage in futile pursuit. Buttersworth, by his skillful placement of the yachts, and by the juxtaposition of shadow and light on the sails and water, suggests the interaction between wind and wave in order to convey a sense of wind strength and speed of Resolute. Butterworth~dq~s close attention to atmospheric detail brings further verisimilitude to the type of racing day depicted in the painting. The race in question is certainly not being contested "over the Club course," or "from the Lightship to Cape May and return." More than likely, it is a private match or stakes race. "Uncle Rufus" Hatch was known to have been "ready to sail any schooner in any day in October with an eight-knot breeze, over the Club course, or to Cape May and return." Vesta and Dreadnought took up his offer to race over the Club course for dinners with twenty covers, Dauntless accepted a friendly match with no stakes, and Comet raced for a $500 cup over the Club Course. Races such as the one depicted in New York from the Bay were typical of the day.