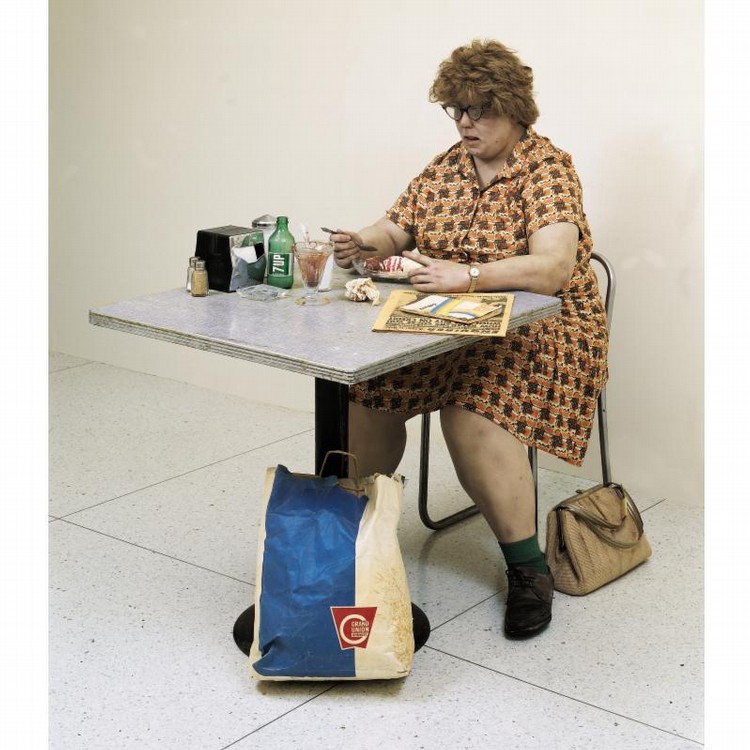 polyester resin and Fiberglas, polychromed in oil with clothes, table, chair and accessories

Duane Hanson's greatest sculptures have a quiet contemplative mood in which a figure of fascinating literalism inhabits its own corner of reality. As the viewer gazes at the particulars of the figure's clothing, features, accessories and environment, one cannot help a feeling of invasiveness or intrusion, but at the same time, a sharp recognition of each quotidian element. Just as the artist was photographed seated with Woman Eating as if he were about to share her ice cream sundae, we could as easily slip into the figure's reality. Unlike other contemporaries who worked in three dimensional formats within the realm of The New Realism or of Pop Art in the 1960s and early 1970s, Hanson's illusion of literalism was all-encompassing from the props to the figure itself. Claes Oldenburg's sculptures of everyday objects are primarily singular subjects - a piece of food, a dress, a flag, a clothespin, or a mouse - presented to us outside of their context. The closely observed nudes of John de Andrea are fascinating in detail but are similarly figures without context. The work of George Segal is closest to Hanson's in its incorporation of real objects or environments, but his figures are rendered with the artifice of plaster and bronze, abandoning any sense of literalism. Hanson sought total integration within his work, blurring the boundaries between reality and illusion

Hanson's earliest works of the late 1960s were more aggressive in subject matter, including works of social commentary, such as War (1969) and Race Riot (1969-71), or horrific incident such as Motorcycle Accident (1967). In the 1970s, Hanson's mature figurative work emerged. Implied movement was eliminated as figures are either seated or standing in repose or contemplation. Any overt signs of political commentary or social satire are eliminated or subsumed, and a more introspective, often sadder, mood of isolation predominates, similar to the glimpses of diners in Edward Hopper's Sunlight in Cafeteria. Hopper and Hanson also both opted for portraying "common people" as subjects, but in Hanson's case, the accessories and objects that accompany the figure are more overt signs of social class. From the wing-tipped glasses to her frayed and drab clothing, the Woman Eating is as clearly associated with a certain American milieu as the Supermarket Shopper (1970) with her hair in curlers and her cigarette dangling from her lips, and as the many workers depicted by Hanson from window washers, construction workers, and cleaning women. As Kirk Varnedoe commented, "It is decidedly not the America of mass-market advertising, being neither homey-folksy rural nor urbanely youthful. Hanson's [figures] have been predominantly middle- or lower-middle-class people, belonging to a world of blue-collar service jobs, small business, and diner eating." (Kirk Varnedoe, Duane Hanson, New York 1985, p. 11). In discussing his technique of body-casting for his sculptures, Hanson commented that he often chose heavy set people for their physical impact and presence, and then "I usually portray them as working class types having great dignity, or over-burdened with despair and fatigue due to the complexities of our time." (Ibid., p. 37)

Hanson cast his figures from life and his technique became increasingly sophisticated. While body-casting may seem a straightforward and simplistic way to capture a realistic figure, elements of the process actually dictate a great deal of effort and artistry to maintain the sense of literalism. The process for the initial mold-making is not entirely comfortable for the sitter, so a slight sense of awkwardness or artificiality can enter into the pose. The initial molds, done in various sections rather than an entire body cast, are then used to form the vinyl casts which are mixed with tinted paints and paraffin to achieve a more flexible and flesh-like material. The individual parts are put together with hot vinyl and soldering irons, with seams and imperfections melted and smoothed. Careful color and pigmentation applications are a process of great and arduous subtlety, indicating a heightened degree of artistic effort that is mirrored in the careful choice of accessories. The realism of the figure in Woman Eating is mirrored in the infinite details of the crumpled napkin, chocolate covered spoons, crumpled shopping bag and TV Guide and newspaper tabloids.