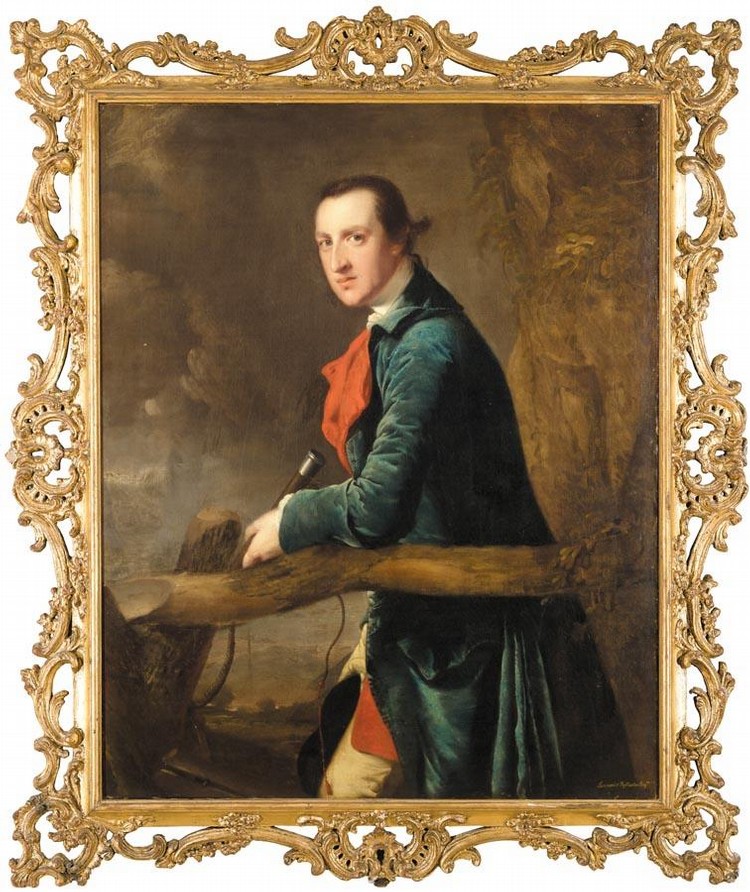 three-quarter length, standing in a landscape, wearing a blue coat and scarlet waistcoat

oil on canvas, in a rare contemporary papier-mache frame

Commissioned by Francis Noel Clarke Mundy (1739-1815) and listed in the artist's account book as 'Mr Rolleston half length, £12.12' among portraits of 1762-1765;
By descent from Francis Mundy to the Reverend William Gilchrist Clark-Maxwell, Markeaton Hall, his sale, Christie's, 15th May 1936, lot 24, bt. Major Godfrey Miller-Mundy for £105;
Thence by descent to his son Major Edward Miller-Mundy, his sale Christie's, 20th June 1975, lot 151, bt. Leggatt for 5,000 gns on behalf of the present owner, a direct descendant of the sitter
EXHIBITED

This splendid portrait of the twenty-five year old Launcelot Rolleston was one of a group of portraits of six Derbyshire friends, painted by Wright in c. 1762-1763. Known as the Markeaton Hunt portraits they were commissioned by Francis Mundy to hang at Markeaton Hall, an imposing house on the outskirts of Derby which he had recently inherited. The portraits remained at the house from the early 1760's until they were sold in 1936 by a descendant of Francis Mundy. They are widely considered to be a landmark in the artist's career when he moved from being a competent pupil of Thomas Hudson to one of
the ablest and most original painters in England.

Wright's grounding as an artist had been sound but nothing in his early work suggested that he could suddenly produce a set of portraits of such outstanding quality. As Benedict Nicolson commented in his improtant survey of Wright's work: 'an attempt must be made to account for the speed of this progress from the mannequins of 1760 to the men and women of flesh and blood of 1762-3'. At the early age of seventeen Wright travelled to London to work with Thomas Hudson. He stayed in Hudson's studio for two years, returning again in 1756 for another fifteen months. Hudson was still considered to be the most fashionable portrait painter in London, and Wright was well schooled in the painting of drapery, and the use of certain stock compositions. As a result his portraits on his return from his second trip to London are very professional, with particularly fine drapery, but have a stiffness not found in his later portraits. The Markeaton Hunt portraits mark a remarkable change of approach, and Benedict Nicolson has pointed to the influence of George Stubbs and particularly to Thomas Frye, whose series of mezzotint portraits, published in 1760 and 1761, seem to have influenced Wright not only in his portraits but also in his celebrated subject pictures.

The inspiration behind the commission from the young Francis Mundy must certainly have come from the existence of an earlier group of portraits of five Oxford friends painted by Arthur Devis in 1749, one of the sitters being Mundy's father, Wrightson Mundy. The Mundy family had owned the manors of Markeaton and Mackworth for over two hundred years. They had been bought in 1516 by John Mundy, Lord Mayor of London in 1522, and the family subsequently acquired estates in Leicestershire. Wrightson Mundy, a friend of Addison, Steele and Swift, was M.P. for Leicestershire and rebuilt Markeaton Hall in 1755. He married Anne, daughter of Sir Robert Burdett Bt. of Foremark Hall near Derby,and a member of another Derbyshire family. Their son Francis who commissioned the portraits from Wright was educated at New College, Oxford, and acquired a taste for poetry. He was attracted to the Lichfield circle where he befriended Anna Seward who, with Erasmus Darwin, encouraged him to publish his poems. He inherited Markeaton Hall from his father on 18th June 1762 and soon afterwards commissioned the portraits of himself and his friends to hang there.

Launcelot Rolleston, the sitter in this portrait, was the descendant of an old Staffordshire family. Henry de Rolleston settled in the county in 1100 and branches subsequently moved to Ireland and to Lea Hall and Ashover, Derbyshire. In the sixteenth century Ralph Rolleston married Margaret, daughter of Sir Richard Bingham of Watnall Chaworth in Nottinghamshire, thus inheriting the Watnall estates. They later acquired Toynton, another Nottinghamshire estate. Launcelot's father was the Reverend John Rolleston (1706-1770), visar of Aston-on-Trent, who married Dorothy daughter of his neighbour Sir Robert Burdett of Foremark Hall, Derbyshire. When his eldest brother died without issue John Rolleston inherited both Watnall and Toynton, and these passed to Launcelot on his father's death. Launcelot served as High Sherrif of Nottinghamshire in 1781

The Markeaton Hunt was probably a private pack of hounds as no trace of it can be found in any early record of hunting in Derbyshire. Each sitter is depicted in a specially devised hunt livery, consisting of a blue velvet coat, a scarlet waistcoat and yellow breeches. It is clear that the six sitters shared more than a passion for hunting. A brief examination of the six sitters shows them to be linked by close family ties.

1. Nicholas Heath (fig.2), unlike most of the other sitters, was not from a Derbyshire family. However in 1768, five years after these portraits were painted, he married Mary, sister of Francis Mundy. He later settled at Boy Court in Ulcombe, Kent.

2. Francis Mundy (fig.3), Nicholas Heath's brother-in-law, was the eldest son of Wrightson Mundy and Anne Burdett. He was educated at New College, Oxford where he met his close friend and fellow Markeaton Hunt member, Harry Peckham. He also shared his love of poetry with Edward Leacroft, another Markeaton Hunt member, and was first cousin of Launcelot Rolleston whose mother was a Burdett.

3. Francis Burdett (fig.4), as with Francis Mundy, came from an old Derbyshire family. He was the son of Sir Robert Burdett, 4th Bt. of Foremark Hall in Derbyshire and his wife Elizabeth, daughter of Sir Charles Sedley. He was therefore closely linked with Francis Mundy who had not only married Burdett's sister Elizabeth but was son of his aunt Anne Burdett. He was also cousin of Launcelot Rolleston.

4. Launcelot Rolleston (fig.5), came from a local Nottinghamshire family and his father the Reverend John Rolleston married Dorothy Burdett, daughter of his neighbour Sir Robert Burdett. He was thus a cousin both of Francis Burdett and of Francis Mundy.

5. Edward Becker Leacroft (fig.6), was from another Derbyshire family, the son of Robert Leacroft of Babbington House, Winksworth, Derbyshire and his wife, Bridget Becker of Southwell, Nottingham. He shared Mundy's love of poetry and lived for some years at Markeaton Hall.

6. Harry Peckham (fig.7), son of the vicar of Amberley in Sussex, was another close friend of Mundy. They were both educated at New College, Oxford. He was a distinguished lawyer, becoming King's Counsel and a leader of Middle Temple. He was a keen hunting man and died following a fall on the hunting field.

The portrait of Rolleston hung together with the other five portraits at Markeaton Hall where they remained in the the collection of the descendants until 1936. The set was purchased by a descendant of Francis Mundy who sold them in 1975. The portraits were all framed in rare papier-mache frames with elegant Rococo motifs (see Paul Mitchell, Wright's Picture Frames, article in the Tate Gallery exhibition catalogue, 1990, p. 275). There were very few craftsmen capable of doing such work and it seems that the frames must have been made in London.