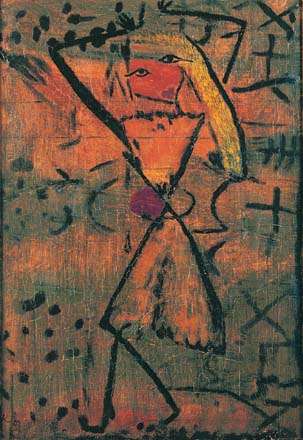 Property of a Private Swiss Collector

PAUL KLEE 1879-1940 tAnzerin (elevin) (dancer, elevin) signed; titled, dated 1930 and numbered g.8 on a piece of the artist's original mount now attached to the backing board oil and watercolour on paper 33 by 23 cm., 13 by 9 1/8 in. Executed in 1930. Provenance Galerie Rosengart, Lucerne World House Galleries, New York (from 1959 until circa 1967) Herbert Mayer, Greenwich, Connecticut (from circa 1967 until 1989) Serge Sabarsky Gallery, New York (on loan in 1977) Galerie Beyeler, Basel (on loan in 1988-89) Shary Grossmann Fine Arts, New York (since 1989) Exhibited Bern, Kunsthalle, Paul Klee, 1935, no. 163 Basel, Kunsthalle, Paul Klee, 1935, no. 100 Luzern, Kunstmuseum, Paul Klee / Fritz Huf, 1936, no. 148 New York, Serge Sabarsky Gallery, Paul Klee. The Late Years 1930-1940, 1977, no. 1, illustrated in colour in the catalogue In the winter 1928-29 Klee spent a month in Egypt, visiting Alexandria, Cairo, Luxor, Aswan, Thebes and the Valley of the Kings. His encounter with this ancient civilisation had a profound impact on the artist, and continued to influence his works throughout his career. In the present work, this influence is visible in the flat, elongated treatment of the female figure against the background of abstract symbols resembling hieroglyphic writing. The dancer is represented in a two-dimensional manner, her body and clothes made up of simple geometric shapes and broken lines. These sharp, straight forms are contrasted only by her eyes, which are rendered in a distinctly Egyptian style. Furthermore, the nearly monochrome palette of this work shows the influence of the earth tones dominant in Egyptian art. This work is recorded under number 1930, 238 (G8) in the artist's Werkkatalog at the Klee Stiftung, Bern.