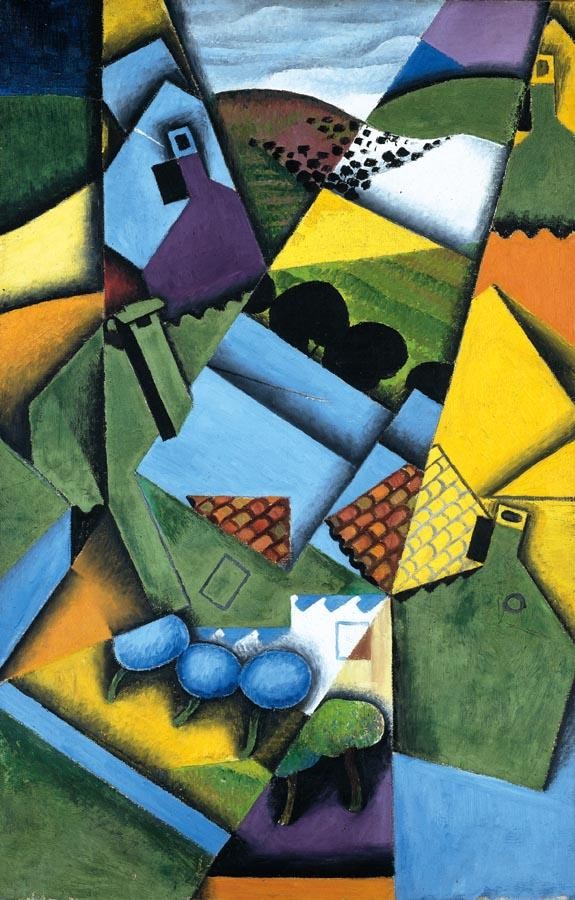 signed Juan Gris and dated Céret 9-13 on the reverse

In September 1913, Gris painted two landscapes of Céret: the present work and another smaller version (fig. 1), now in the collection of Moderna Museet, Stockholm. From August until October of that year, Gris and his companion Josette stayed in the town of Céret (fig. 1), situated in the French Pyrénées near the Spanish border, joining Picasso who had been staying there for several months. As Mark Rosenthal commented about the present work: 'A tour de force in this series of works involving a structure of stripes is the brilliantly coloured Landscape with Houses at Céret, 1913. During the summer of 1913, Gris joined Picasso at Céret, where he painted this rare pure landscape. In it, he loosened the vertical emphasis of the earlier stripes so as to form a composition of diagonal, overlapping planes. Once more, the structure appears to be the starting point of the paintings, and all the details conform to it' (M. Rosenthal, Juan Gris (exhibition catalogue), op. cit., 1983-84, p. 40).

During this crucial period in the development of Cubism, Gris often exchanged views with Picasso, who at this time worked mainly on his papiers collés, including several views of Céret (fig. 3). Daniel-Henry Kahnweiler, who was a friend and dealer of both artists, and the first owner of the present work, discussed the dialogues between the two painters: 'The discussions at Céret were not wasted on Gris. They made it possible for him to become aware of many things touching his own painting. What he had gained showed itself in the far greater simplicity and enhanced clarity of his pictures' (D.-H. Kahnweiler, op. cit., 1947, p. 9). Kahnweiler, who at the time started buying works from Picasso and Braque, first met Gris at the 'Bateau-Lavoir' in 1908. In February 1913, he gave Gris his first contract, giving the dealer exclusive rights to his production in return for a regular income. Their relationship was interrupted with the start of the war in 1914, but resumed again in 1919.

The year 1913 was a pivotal one in the development of Gris' art. It was at this time that he began to enrich the colour and forms of his paintings, progressing from analytical to synthetic Cubism. Moving away from the chromatic austerity of early Cubism, his paintings demonstrate a new interest in strong, vibrant colour, with pronounced tonal contrasts, as well as a new emphasis on modelling and texture. His trip to Céret in the summer of 1913 was the first time Gris left Paris since his arrival there in 1906, and it may have been due to this change and to the picturesque character of the town nestled in the mountains, that the artist discovered this new direction in his painting.

Dominated by primary colours mixed with green and purple, the composition of Paysage et maisons à Céret is broken into geometric forms. Moving away from the pronounced vertical emphasis of his previous works, Gris introduced here intersecting diagonal lines, subverting the sense of depth and perspective, and underlining the flatness of the painting's surface. The sharp angles and pronounced square and triangular forms are counter-balanced by the irregular shapes of the row of trees in the foreground, echoed by what appears like their shadow in the upper part of the composition. In the following months, Gris further explored this technique in works such as Le Fumeur (fig. 4) as well as a number of still-lifes, a genre which accounts for the majority of his artistic output during this period. The present work therefore represents a rare example of a pure landscape in Gris' work, as well as an important milestone in the development of synthetic Cubism.