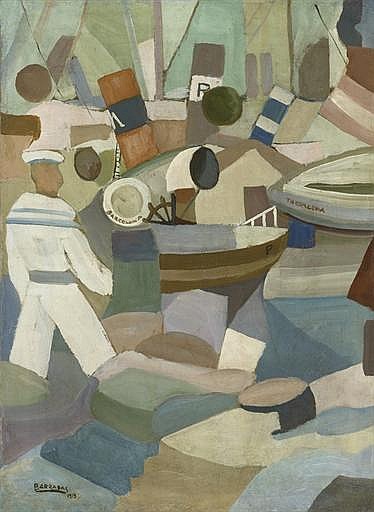 Puerto, dates from one of the key moments in the Uruguayan master Rafael Barradas' oeuvre, when he was working in his mature style which he called "Vibracionismo." In 1913, the artist traveled to Spain, where he found a community of intellectuals--writers and artists --who like him shared a desire to engage with European currents of artistic modernity to represent contemporary urban life and its sense of temporal simultaneity. Barradas exhibited drawings, and published illustrations in newspapers and magazines in his native Montevideo in the 1910s, departing for Europe in 1913. He visited Geneva, Milan, and Paris prior to settling in Barcelona.

During the First World War, this Catalan city had become a refuge for important members of the avant-garde among them Francis Picabia, Robert and Sonia Delaunay, Albert and Juliette Gleizes, and others. There they exhibited their works, and collaborated with Catalan artists and writers, among them Joan Miró, in the creation of magazines that featured poetry, drawings, and art criticism. Among these were Picabia's 391, Josep Junoy's Troços (1916-1918), Joan Salvat Papasseit's Un Enemic del Poble (March 1917-May 1919), and Arc Voltaic (Feb. 1918). In 1912, the landmark Exposició d'Art Cubista of 1912, which Christopher Green has called, "one of the earliest mixed displays of cubist works to be held outside Paris," was held at the Galeries Dalmau.(1)

Barradas, who arrived in Catalonia a year later, moved to Barcelona in 1916. Along with the Catalan artists Enric Cristófor Ricart and Rafael Sala, who had spent time in Florence, Barradas is credited with being among the first artists to introduce Futurism to Catalonia.(2) Barradas worked closely with Joaquín Torres-García during this period, as they both explored cubist pictorial elements, the grid, urban scenes and pictorial representations of simultaneity. In 1917, both artists exhibited together at the Galeries Dalmau, and Barradas's works were shown in the Galeries Laitanes. As Green has observed:

Barradas had made contact with the Futurists in Milan, and brought to what he learned from French Cubism a futurist stress on urban modernity and belief in the possibility of creating equivalents for the energy of urban life by the action of lines and planes. His priorities or what he called a 'Vibrationist' were very much those of his compatriot Torres-García when he turned away from noucentista classicism around 1917.(3)

Barradas created several drawings and paintings depicting urban life in Barcelona, its cafes, cable cars, and dance halls. An example is Kiosko de Canaletas of 1918 (Eduardo F. Costantini Collection, Buenos Aires), in which he creates a collage-like effect by representing figures strolling along the Rambla, seated at cafes, a waiter carrying a tray filled with bottles (including the iconic Cubist prop Anís del Mono), street signs announcing soccer games, and a profusion of clocks that underscore his goal of portraying simultaneity.

In Puerto he depicts a port scene, in which a series of rounded and faceted forms echo the contours of boats and ships and the water's waves. As in his scenes of city life, here, Barradas evokes simultaneity and movement through overlapping forms in shades of teal, turquoise, emerald, and aquamarine, olive, beige, lavenders and pinks; and creates a dynamic composition that seems to rotate in a clockwise direction. It is anchored by a sailor at the far left, the chalky white of his uniform bleached by the Mediterranean light. Just above him, another figure seems to struggle to dock a vessel--one can almost feel the bobbing and weaving of the ships at sea. The boats are seen from various vantage points at once--one from the side, another with the name "Tarragona" from above, and a life-raft marked and "Barcelona" floats seemingly unanchored. This fleeting dynamic fragment of maritime labor stands in for a much larger whole, the commercial underpinnings of Catalonia's economy.

Barradas moved to Madrid in 1920, where he developed friendships with Salvador Dalí, Federico García Lorca, Luis Buñuel and others, contributing illustrations to avant-garde magazines and books as well as creating set designs and posters. He frequently attended legendary tertulias at the Café del Pombo, among others, depicting the writer Ramón Gómez de la Serna in a drawing in 1921. In an undated letter, Gómez de la Serna's admiration of Barradas is made manifest:

Dear and admired Barradas: Since there is a cafe that is our central location and whose tertulia only happens once a week, there is no excuse for your absence. Ortega y Gasset is planning to launch a magnificent magazine that will define contemporary values, and he thinks that in order for the covers to have a truly modern character, we need you to contribute to them monthly. Please go see him. Warmest regards, your devoted, Ramón."(4)

In 1922 he became artistic director of the vanguard journal Alfar, published in La Coruña and in 1925, Barradas's work was included in the landmark Exposición de la Sociedad de Artistas Ibéricos, and won the Grand Prix in the theater section at the International Exhibition of Decorative and Industrial Arts in Paris. The following year he moved to the L'Hospitalet de Llobregat where he led a salon that gathered Dalí, Lorca, and others. He returned to Montevideo in 1928, where he died the following year.