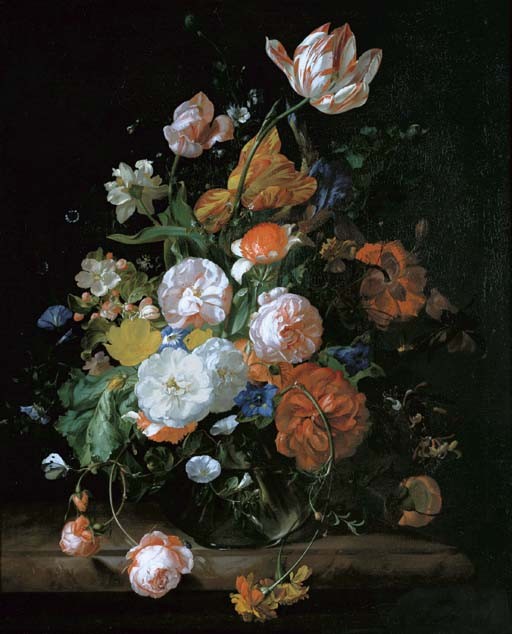 In this classic flower still life by one of its greatest late practitioners, a bouquet of tulips, roses, carnations and other flowers is barely contained by a glass vase. The composition is all curves and rounded shapes and the effect is one of elegance, sophistication, and femininity. A peony and the broken stem of a carnation echo the form of the vase as a butterfly hovers at the left and the petals of a poppy at the lower right almost brush the top of the stone ledge. As in other of Ruysch's still lifes, abundance is the theme and impossibly elegant lines and rounded forms are her primary means of conveying it.

This had become the point of the flower still life by the turn of the eighteenth century. The vanitas theme that was so popular in early examples of the genre had receded and, with the works of Ruysch and her contemporary Jan van Huysum (1682-1749), an interest in the decorative overtook the earlier emphasis on moralizing iconography. Ruysch increasingly favored diagonals and often oriented her compositions around them, as she has in this painting of 1709 and Flowers in a vase from around the same time (National Gallery, London). The tulip at the top of the bouquet that inclines towards the right is balanced by the weight of the peony at the lower left, while the broken stem of the carnation extends the line of the tulip to form an elegant S shape, in almost perfect accordance with Hogarth's later 'line of beauty'.

Rachel Ruysch was a favorite among contemporary poets. Hieronymus Sweerts dedicated a poem to her in which he declared that
Zeuxis' illustrious progeny
will crown your youthful person
as their Flower Goddess
for your beautifully variegated festoons, bouquets, and wreaths,
painted with a brilliance that few can match.
If Mistress Oosterwyk
sat here in bridal splendor,
you would outshine her.
De Heem would rise from his grave,
with van der Ast and van Aelst, upon whose works
the world has showered its praise.
(Alle de gedichten, Amsterdam, 1697)
No less than eleven contemporary poets paid tribute to her after her death in an anthology published in 1750 devoted to 'de uitmuntende schilderesse mejuffrouwe Rachel Ruysch' (the excellent painter Miss Rachel Ruysch). More recent admirers have described her as 'the small snowy dome which crowns the Everest of this particular art' and advised the potential buyer that 'with Rachel Ruysch there are no poor pieces, and a man might with perfect safety send in his bid for a "lot" which he had never seen' (M.H. Grant, Rachel Ruysch 1664-1750, Leigh-on-Sea, 1956, p. 20).

Rachel Ruysch was born into an artistic family in The Hague in 1664. Her father was the renowned anatomist and botanist, Frederick Ruysch (1638-1731), and her mother was the daughter of the architect Pieter Post. Rachel became a pupil of Willem van Aelst in 1679, at the age of fifteen, and remained in his studio until the painter's death in 1683. In 1693 she married the portrait painter Juriaen Pool, with whom she had ten children. In 1709 the family moved to The Hague where both entered the city's St. Luke's Guild. From 1708 to 1713 both Ruysch and Pool served in Düsseldorf as court painters to the Elector Palatine, Johann Wilhelm, as had Eglon van der Neer (see cat. 46) before his death in 1703. Her Fruit and Flowers in a Forest (Städtische Kunstsammlungen) was commissioned by the Elector and hung, together with Vase of Flowers now in Munich (Bayerische Staatsgemäldesammlungen), in his bedroom at Düsseldorf, a more selective and intimate venue than the semi-public gallery. Ruysch and her husband continued to work for Johan Wilhelm until his death in 1716, when they returned to Amsterdam where Ruysch continued working until the age of eighty-three. Her paintings have been admired ever since and a flower still life of 1716 set the record price for Ruysch's paintings at $1,048,191 (Sotheby's, 12 December 2002).

This painting will be included in the forthcoming catalogue raisonné of the artist's works by Marianne Berardi.