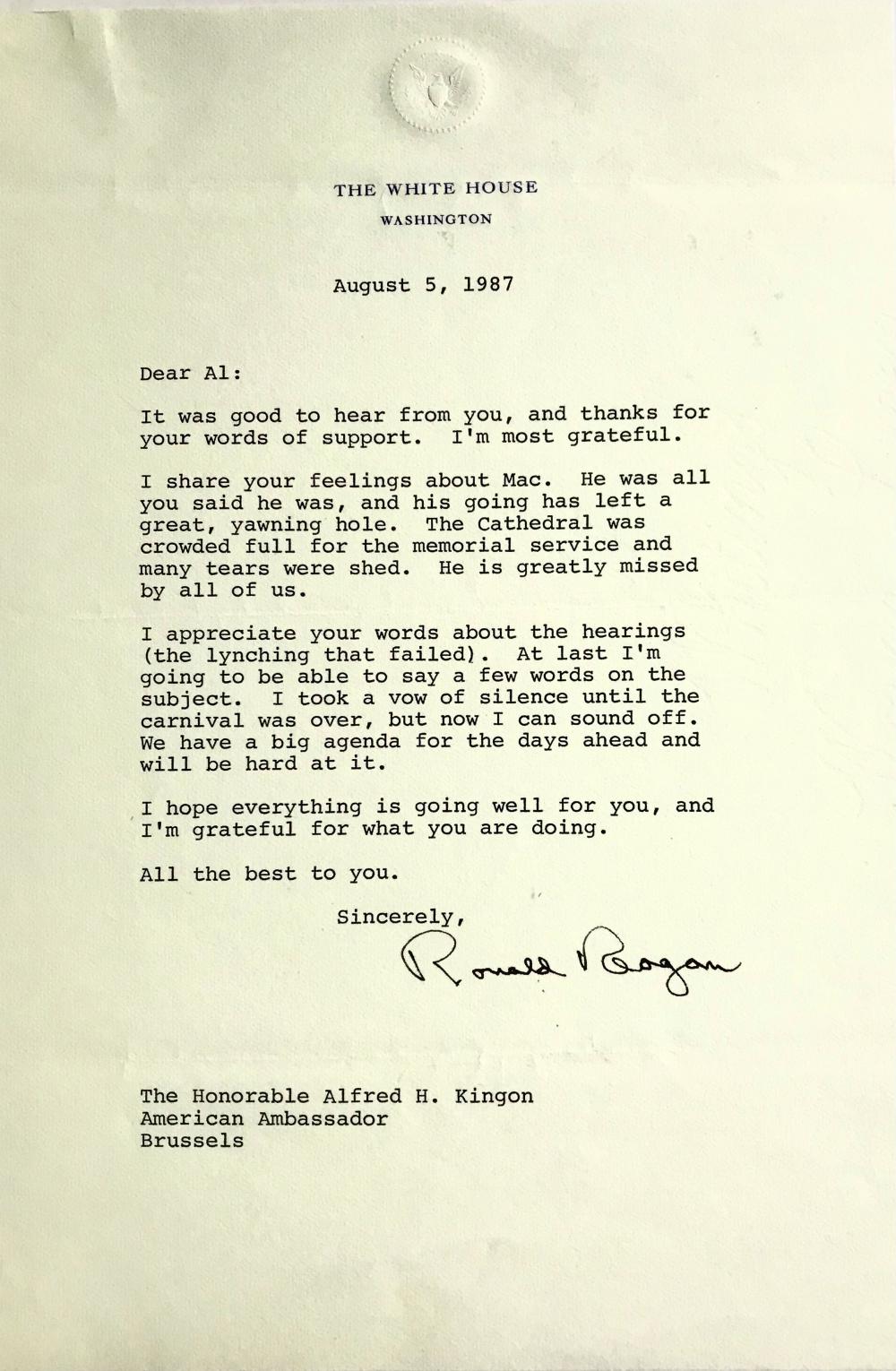 Lot 120: Reagan Calls the Iran-Contra Scandal “the lynching that failed” and “the carnival”

“It was good to hear from you, and thanks for your words of support. I’m most grateful.

I share your feelings about Mac. He was all you said he was, and his going has left a great, yawning hole. The Cathedral was crowded full for the memorial service and many tears were shed. He is greatly missed by all of us.

I appreciate your words about the hearings (the lynching that failed). At last I’m going to be able to say a few words on the subject. I took a vow of silence until the carnival was over, but now I can sound off. We have a big agenda for the days ahead and will be hard at it.

I hope everything is going well for you, and I’m grateful for what you are doing…”

After a successful career in Hollywood, during which he made more than 50 films, Reagan entered politics campaigning for Senator Barry Goldwater (known as “Mr. Conservative”) during his 1964 presidential bid. Reagan, who had only switched his party affiliation from Democrat to Republican several years earlier, began to gain prominence within the party and, in 1966, was nominated as the Republican candidate for Governor of California. He held that office for two terms before becoming a popular two-term U.S. president. The mixture of liberal and conservative traits embodied by Reagan led to a reshaping of the Republican Party and a phenomenon known as the “Reagan Democrat,” Democrats who vote Republican because of their conservative views on certain issues. During his eight years as president, Reagan became an icon of Cold War politics and the subject of inquiry in the Iran-Contra scandal, which Reagan obliquely refers to in our letter as “the lynching that failed” and “the carnival.” In January 1987, Congress began an official probe into the Reagan administration’s involvement in selling arms to Iran, despite an embargo, and using the proceeds to fund Nicaraguan rebels; Reagan broke his silence on the matter in a televised speech on March 4, 1987, taking responsibility for and expressing his regret about the situation. Although the scandal caused a decline in popularity, his approval ratings rebounded, earning him the nickname “the Teflon president.”

Kingon was a Wall Street investment adviser and publisher of Financial World and Saturday Review who served as Assistant Secretary of Commerce from 1983-1984 and Reagan’s cabinet secretary from 1985-1987, playing “a central role in domestic, agricultural, economic and trade policy,” and the U.S. ambassador to the European Union from 1987-1989, (“Working Profile: Alfred H. Kingon; Being a Fly on White House Wall and Loving It,” The New York Times, Weinraub).

Our letter references the death of U.S. Commerce Secretary Malcolm “Mac” Baldrige, Jr. (1922-1987), was the son of a Nebraska congressman who, after his graduation from Yale, enjoyed a career as the head of several manufacturing concerns in Connecticut. In 1980, Reagan selected him as his commerce secretary, and he served in that position for six years. Baldrige was also active on the rodeo circuit, earning several honors in that field while commerce secretary. He died when he was accidentally crushed by his horse during a calf-roping competition in Brentwood, California, on July 25, 1987. Baldridge was eulogized by Reagan and Vice President George H.W. Bush at his memorial service at Washington’s National Cathedral a few days later. On October 17, 1988, Reagan posthumously awarded Baldrige the Presidential Medal of Freedom.

Folded with a very light paperclip indentation in the upper left corner, otherwise fine. With the original, unstamped envelope. [indexhistory]