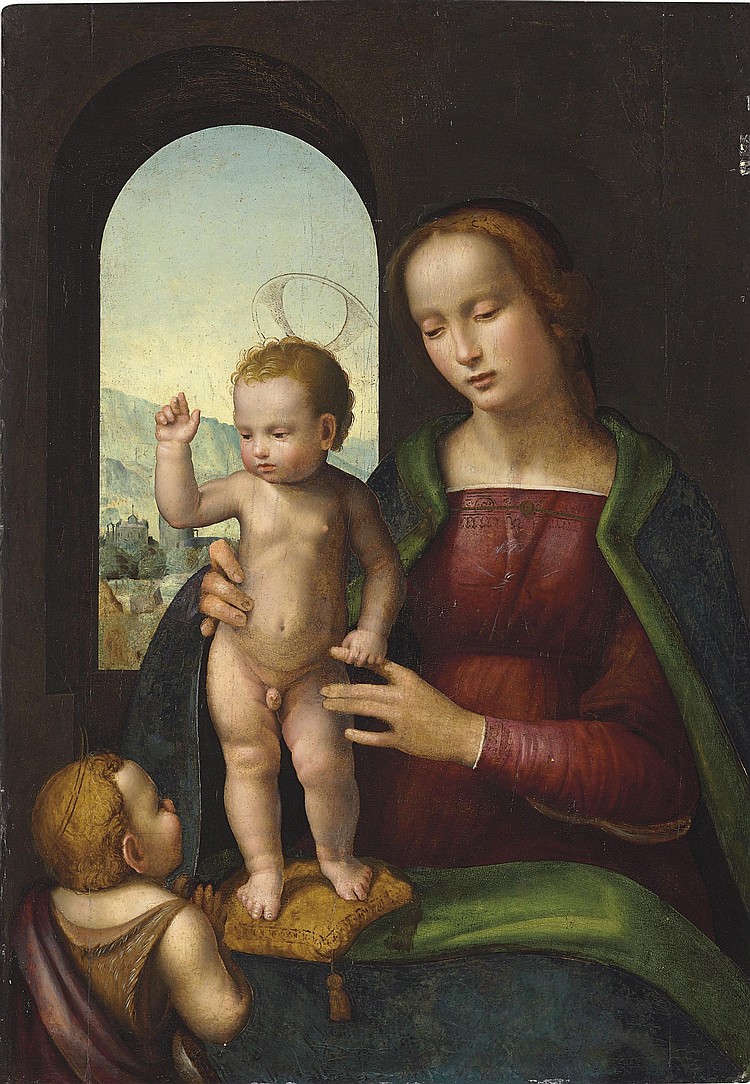 Property from the Collection of Professor and Mrs. Clifford Ambrose Truesdell

The Madonna and Child and the Infant Saint John the Baptist presented here is the work of the young Ridolfo Ghirlandaio, dating to the first decade of the sixteenth century. Ridolfo trained with his father, Domenico Ghirlandaio and his uncle Davide, and much of his early work is indebted to them. The pose of the Madonna delicately balancing the standing Child on a pillow upon her knee replicates Domenico's representation of this group in the Madonna and Child enthroned with Saints Peter, Clement, Sebastian and Paul (San Martino, Lucca).

The Madonna and Child in the collection of the Palazzo Pitti, Florence (inv. 1912 no. 363) since the eighteenth century and relatively recently identified as the work of Ridolfo Ghirlandaio, dates to 1510-13, and makes for a favorable comparison with the present painting. Both scenes are set in an interior, the walls spare, articulated only by a window in the upper left corner. The view to the outside shows a brightly lit mountainous landscape that is generally associated with Piero di Cosimo, whose landscape treatment influenced many of the artist's works early on, such as Saints Peter and Paul (1503; Pitti, Florence) and Coronation of the Virgin (1504; Louvre, Paris).

During the next decade of his career Ridolfo was awarded prominent commissions for fresco decoration in Florentine churches throughout his career, these include a cycle for the Cappella dei Papi in the convent of Santa Maria Novella, Florence (1515), where he was assisted by Jacopo da Pontormo; and two frescoes of scenes of the Life of Saint Zenobius, for the saint's confraternity, Cencacolo Andrea del Sarto San Salvi, Florence (1510). Ridolfo continued with religious commissions, both independently and in collaboration with other artists, and was also active as a portraitist.

We are grateful to Everett Fahy for confirming the attribution to Ridolfo Ghirlandaio, and proposing that it is an early work by the artist, on the basis of photographs (private communication, 9 December 2008).