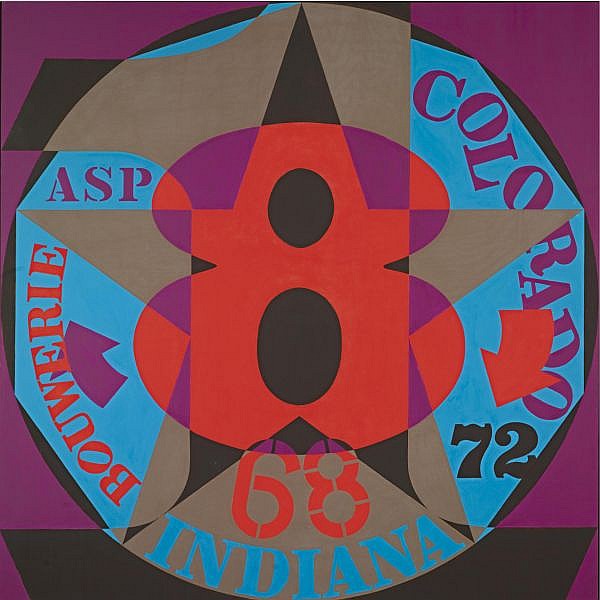 Andy Warhol once succinctly described Pop Art as simply "liking something." If taken literally, then it would be safe to say that Robert Indiana, who once proclaimed himself the 'American Painter of Signs,' was enamored with the very 'signs' he painted. Born Robert. E. Clark, Indiana moved to New York in 1954 and shortly thereafter established himself in 25 and 31 Coenties Slip, an area located just below the financial district. He joined an impressive list of neighbors living and working there including Jasper Johns and Robert Rauschenberg. Outside his loft Indiana saw signs more plentiful than trees, and wrote of that time that "the front of [Coenties] 25 was covered with words that influenced me in my work every day....the brass stencils I found in the loft - numbers, names of boats, and companies from the nineteenth century - became the matrices and materials for my work, and especially for my painting." (Exh. Cat., Robert Indiana: Rétrospective 1958-1998, Nice, 1998, pp. 37-38). There he worked and lived in a neighborhood far different from where the "elite" Abstract Expressionists resided. Coenties Slip was a "life that was un-orchestrated and their art was characterized by a...experimentalism [as they] picked through the architectural debris of the surrounding dock areas, city buildings." (Susan Elizabeth Ryan, Robert Indiana, Figures of Speech, New Haven, 2000, p. 33). The 1960s bore witness to a visual assault of images printed, painted, photographed, stenciled, copied that introduced a whole new set of signs, symbols and imagery onto society. Pop artists set out to incorporate this shared visual experience into their work - and their reality included the reproduced object, advertising, mass media and the consumer product. Although the very essence of Indiana's work quotes from the bright colors and urban elements, his literary quality, coded poetry and repeated geometry distinguishes Indiana's work from his Pop counterparts. This distinction began in 1962, where his use of repetition, portraiture and self-reference begin to take shape. Indiana's iconography was a cluster of verbally visual characteristics that he manipulated in repeating but continually changing ways that become a self referential symbol of identity. (Ibid., p. 104). The coded language Indiana used in what would become known as his biographical Autoportrait evokes the illusiveness of the coded imagery in the work of Jasper Johns. However, it more directly recalls the surrealist opposition of illusion to reality. The Surrealists often sought to employ language not in the conventional usage, such as in René Magritte's diagrammatic word-image paintings of the late twenties in which pictures of things are paired with unrelated words. (Ibid.). The present work, Decade: Autoportrait 1968, 1972, manifests a glorious display of several of Indiana's iconographic and formalist concerns. Referencing a bold advertising sign, a full bodied Roman numeral "8" boldly hued in a vibrant red color sits at the center of the canvas. Indiana's interest in numbers, which began with his optically charged Cardinal Numbers, 1966, would later evolve into the hard-edged numeral, as evinced in the present lot. Further, the number is framed by another favored theme of the artist - the five-pointed star at the center, which is one of Indiana's most common symbols that suggested both patriotism and fame. Indiana's fascination of numbers in some ways may eclipse his interest in text, including the seminal Love, for which he is most known. As Indiana has stated, "Numbers fill my life. They fill my life even more than love. We are immersed in numbers from the moment we're born. Love? Love is like a cherry on top of the whipped cream. Numbers surround us...[they] are seething around us..." (Exh. Cat., Rockland, The William A. Farnsworth Library and Art Museum Rockland, Indiana's Indianas, July 1982, p. 9)