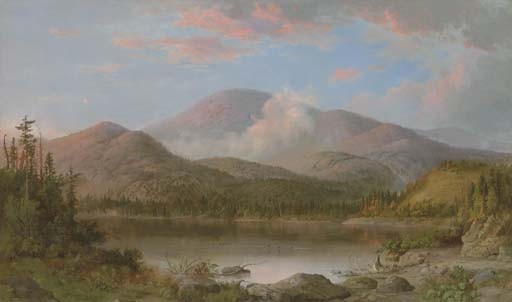 Robert Scott Duncanson holds an important position in American art as the first African-American artist to achieve national and international recognition. His contemporaries recognized him as the leading landscapist west of the Allegheny mountains. Duncanson derived his subjects from diverse sources, many literary, other biblical and still others, as with the present work, inspired by his travels.

Duncanson spent the second half of the Civil War period in self-imposed exile in Canada, "As the war waged on into 1863 the bleak prospects for peace and the deteriorating racial situation worried the artist." (J.D. Ketner, The Emergence of the African-American Artist: Robert S. Duncanson, 1821-1872, Columbia, Missouri, 1993, p. 134) Originally, he intended only to pass through Canada on his way to Europe, where he planned to tour his "great pictures." Duncanson ended up remaining in Canada for two years and his extended stay greatly influenced the local artists. "The Canadian art community eagerly received him, and he immediately became an integral part of the local art culture. Although he intended to stop only briefly, he stayed much longer than he anticipated, living in Montreal for two years from 1863 to 1865...Subsequently, a number of young Canadian artists emerged whose focus was on the landscape was directly influenced by Duncanson." (The Emergence of the African-American Artist: Robert S. Duncanson, 1821-1872, p. 137)

Montreal and the surrounding areas offered Duncanson a vast array of idyllic subject matter. The lush Canadian landscape enthralled the artist. "While living in Canada, Duncanson maintained his usual artistic habits, sketching the summer and working up canvases in the fall for exhibition in the winter and spring. He brought his ambitious historical paintings on tour to Canada, but his attention was primarily captivated by the spectacular Canadian landscape. During both his summers in Canada, Duncanson sketched the scenery between Montreal and Quebec in Canada East, now Quebec Province." (The Emergence of the African-American Artist: Robert S. Duncanson, 1821-1872, p. 139)

The subject of the present work, Mount Orford, is located in the eastern province of Quebec about 67 miles east of Montreal and 20 miles north of the Vermont border. The lake depicted is probably Lake Memphremagog, a popular sketching spot for Canadian artists. This sizeable scenic lake extends south from Mount Orford and the town of Magog, Quebec, to Newport, Vermont. Lake Memphremagog is also depicted in Duncanson's Owl's Head Mountain, also painted in 1864 and currently in the collection of the National Gallery of Canada, Ottawa.
Mount Orford and Duncanson's other landscapes painted during his time in Canada from 1863 to 1865 are marked by a greater sense of naturalism than his earlier works. Duncanson's dramatic sky and picturesque details in the present work capture the sumptuous landscape with a romantic, but not contrived hand. "In pursuing a more realistic rendering of his landscape views and moving away from imaginary compositions and fantastic subjects, Duncanson was following Ruskin's dictum to study nature closely and through its realized forms reveal its soul and sentiments...In addition to their topographical accuracy, these works share a greater sense of naturalism than his earlier landscapes" (The Emergence of the African-American Artist: Robert S. Duncanson, 1821-1872, p. 149)

Always remaining true to his own mandate to paint the landscape which he believed God to have created, Duncanson painted works that echoed the peace and tranquility of an unspoiled and idyllic earthly paradise. Divine and pristine, Mount Orford appears to be untouched by the hand of man, the only sign of disturbance is the geese skirting off the placid lake. The imposing mountain, verdant landscape and tranquil lake evoke a sense of hallowed serenity. This work is a celebration of the tranquil and untouched Canadian landscape that Duncanson found to be so inspiring.

"From the time of his arrival in Montreal, Canadians recognized Duncanson as the most accomplished landscape painter in their country. In addition to his dramatic influence of Montreal artists such as Otto Jacobi and Allan Edson, the pervasive effect of the African-American's paintings is confirmed by the continuous growth in the number of landscapes exhibited in the annual Art Association exhinitions through the decade. After Duncanson helped popularize landscape painting in Canada, American landscape painters...were increasingly represented at the Art Association exhibitions and in the local galleries." (The Emergence of the African-American Artist: Robert S. Duncanson, 1821-1872, p. 151)