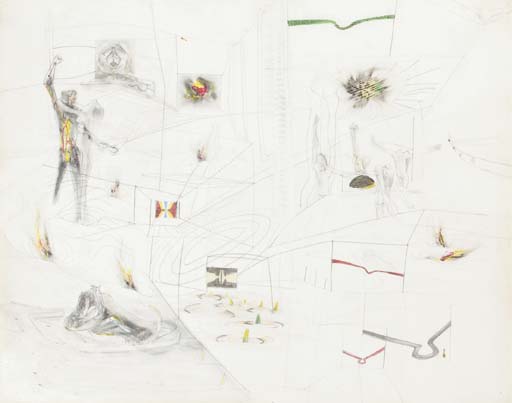 This work is recorded in the archive under no. D42-13.

Executed in 1942, Matta's Sans titre presents the viewer with a web-like vision of Bosch-like proportions. The spidery and smudged pencil has replaced the bright crayons of his earlier work, and the ground has been left almost entirely in reserve, making the picture appear more like a diagram than an hallucination, reflecting Matta's incorporation within his visual idiom of the lessons learnt during his days as a pupil of Le Corbusier. This sense of the diagrammatic adds a veracity to the picture, as well as reinforcing the viewer's feeling that, however alien it may be, there is a logic to the images and their interplay. Parts of Sans titre are reminiscent of scientific illustrations, of engineering plans, of graphs and statistics. He has twisted the pictorial language of the known and the quantifiable to his own ends, in order to present his own vision of some netherworld of the mind as a reality in its own right.

The Bosch-like atmosphere in Sans titre is heightened by the presence in several places of figurative elements, especially the naked figures. Some of these are distorted in infernal and jarring ways, while others are not. There seems to be some manner of hierarchy, but it lies beyond the veil of understanding as much as the figures themselves. Sharp shapes appear filled with colour and texture like information screens or televisions, making Sans titre appear to be a picture of some fantastical device, a strange contraption from a Surreal dimension perfectly fusing the organic and the technological.

The interest in subverting science reflects the reappearance in Matta's life of the artist Duchamp, whom he had known previously and with whom he became reacquainted the year Sans titre was executed. In many ways, Matta was to become the Duchamp of his generation, not least in the Svengali-like sway that he would come to hold over the young American artists developing at that time. Matta was a well-connected exotic, and introduced the young artists to ideas, such as the automatism that we can infer was used in part in Sans titre, that would change the face of painting the world over. This was the beginning of arguably the most significant period of his career, as he created increasingly strong, and increasingly large, images, both on paper and increasingly in oil. This resulted in great acclaim: his first exhibition, at Pierre Matisse's gallery, was praised by Breton as one of the high points of Surrealism.

The Art of the Surreal