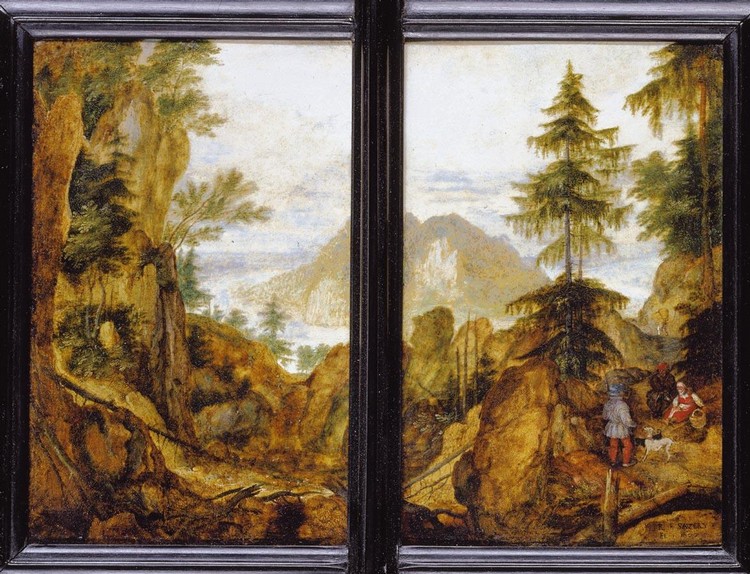 PROPERTY FROM THE COLLECTION OF ALPHONS JAFFÉ (1860-1948). SOLD JOINTLY BY HIS HEIRS AND BY LILLEMOR HERWEG

A PAIR OF LANDSCAPES WITH A HUNTER AND TRAVELLERS ON AN ALPINE PASS, FRAMED AS ONE

both oil on copper

Alphons Jaffé, Berlin, by 1929;
By whom loaned to the Stedelijk Museum de Lakenhal, Leiden, March 1939;
Seized by the Reichskommissar of the Netherlands, 10 May 1941;
Anonymous sale ('The Property of a Lady'), London, Christie's, 9 December 1994, lot 34, for £35,000;
With Johnny van Haeften, London;
Anonymous sale, Lucerne, Galerie Fischer, 26 November 1996, lot 2029, when bought by the Herwegs;
Now offered jointly by Lillemor Herweg and the Heirs of Alphons Jaffé.

Thomas DaCosta Kaufmann points out that this picture provides the earliest clear evidence in paint of Savery's trip to the Tyrolean Alps of 1606-7 where, according to Sandrart, he had been sent by Rudolph II, and where he made copious drawings. The two copper plates may be fitted together to form one composition, the original plate having probably been cut some time after Savery completed the work. The left half of the composition derives from a drawing now in Stockholm, Nationalmuseum, inv. no. THC 3246/ 1863 (see Spicer, under Literature, vol. II, p. 440, no. C 42 F 44; Müllenmeister, under Literature, reproduced p. 214).

The present two coppers may be compared with at least three other pairs of upright alpine scenes on copper that date from around the same time (though none appear to be of contiguous landscapes) depicting similar alpine scenes including one picture dated 1608 (see Müllenmeister under Literature, nos. 46 & 47, 48 & 49, and one sold London, Christie's, 10 April 1981, lot 37). Like the present picture, these works tend to be thinly painted on to their copper supports, giving the impression of a misty alpine atmosphere.

Please note that by arrangement between Lillemor Herweg and the Heirs of Alphons Jaffé, this lot is offered for sale jointly by both parties, with clear title.

Old Master Paintings from the Collection of Lillemore Herweg