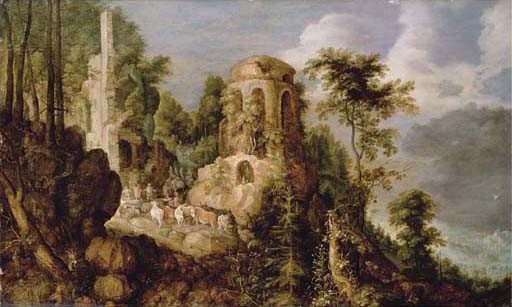 with Julius Böhler, Munich.
with Curt Benedict, Paris.
Pierre Gacher, Mazamet.
with J. Leegenhoek, from whom acquired by René Küss, before 1986.

The Property of the late Professor René Küss (Lots 11-18)

Of Flemish origin, Roelandt Savery moved to Haarlem with his parents in about 1585, but by 1602 he had settled in Amsterdam with his brother, Jacob, who died the following year. Roelandt is known to have entered the service of Emperor Rudolph II in Prague by 1604, a position he retained until the Emperor's death in February 1613. There he joined a group of international artists that the Emperor had gathered around him, including Bartholomeus Spranger, Hans Hoffman, Matthus Gundelach, and Jacob Hoefnagel. His interest in animals and their natural environment was heightened by a series of sketches commissioned by Rudolph of Savery's travels in Southern Germany and Bohemia, and this preoccupation with transcribing nature accurately with his pen and on canvas engaged Savery even after his departure from Prague towards the end of 1613.

Savery spent the next six years in Amsterdam producing a body of landscapes that, as Joaneath Spicer puts it 'offered the lowlander the vicarious thrill of the mountain wilderness by combining plunging views and breathtaking waterfalls into a composite view' (The Dictionary of Art, ed. J. Turner, Oxford, XXVII, p. 886). This picture, one of only two or three securely dated works from 1616, perfectly encapsulates this notion of depicting a fantastical landscape as foreign as possible from Holland's own scenery. The blasted tree, the plants and fauna in the foreground are depicted with characteristic detail against a wild landscape whose space is defined by the dramatic fall of light. The biblical theme is nominal and relegated to the middle ground.
The quality of Savery's output started to decline after 1620 and he died in poverty and mental disarray in Utrecht.