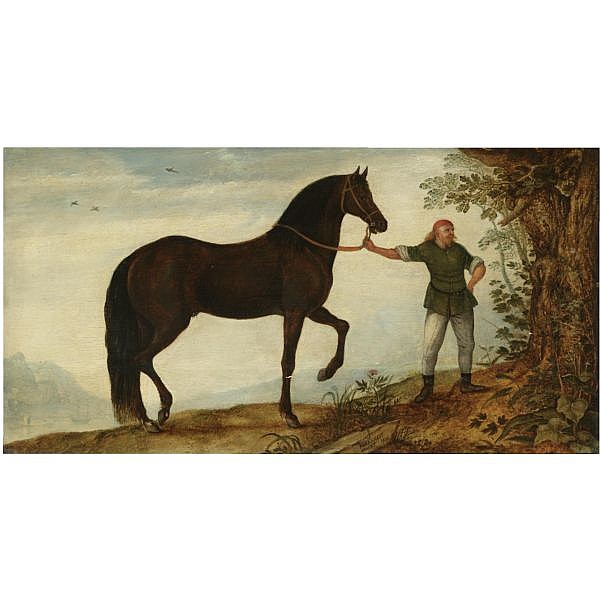 Roelandt Savery , Kortrijk 1576 - 1639 Utrecht A black stallion with a groom, in a landscape oil on panel

Probably painted for Rudolf II in Prague, and possibly one of the six portraits of horses listed under no. 1334 in the Imperial inventory taken in Prague in 1621;
With Leonard Koetser, London, 1961;
Dr. Hans Wetzlar, Amsterdam, by 1963.

This is an early work, painted the year after Savery's arrival in Prague to take up his employment as Court Painter to the Emperor Rudolf II. The Emperor was by all accounts very proud of his horses, and went to great lengths to acquire them, from as far away as Spain. Visitors to Prague were often taken to the stables to view them, and contemporary accounts record that the Emperor liked to watch them being exercised. His passion for horses is further recorded in Adriaen de Vries's bronzes of horses, which are believed to portray stallions from the Imperial stables. It is thus very likely that Rudolf commissioned this picture from his Court Painter, to depict one of his favourite horses. The groom is wearing Bohemian costume.

Such equestrian portraits have precedents in Italy in the 16th Century, for example at the Gonzaga court at Mantua. Only two years earlier however, in a work dated 1603 and painted in The Hague, Jacques de Gheyn portrayed the white stallion captured from Mendoza by Louis Gunther of Nassau, and offered to Prince Maurits after the Battle of Flanders in 1600 (see Fig. 1).υ1 De Gheyn's painting was a Court commission from Prince Maurits, as the present one probably was from Rudolf II. While the manner of portrayal, with a groom leading the horse seen in profile, is similar in both works, it is unlikely that Savery could have seen De Gheyn's very much larger work before he travelled to Prague. No similar works are known today from Savery's Prague period, but much later, in 1628, he portrayed two horses with grooms in a fantasy landscape; that work may be a reprise of a lost earlier prototype.υ2