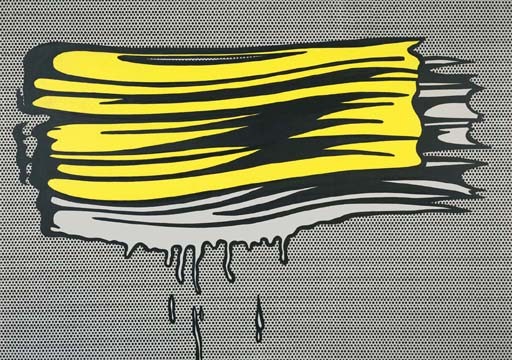 This work will be included in the forthcoming catalogue raisonné being prepared by the Roy Lichtenstein Foundation.

Dave Hickey wrote, "Like Andy Warhol's Soup Cans, Lichtenstein's brushstrokes were, clearly and at first glance, generational icons. They proposed a critique of the immediate past, clearly intending to supersede it without destroying it - to propose something new that would renew the past". (D. Hickey, Roy Lichtenstein Brushstrokes: Four Decades, New York, 2001, p. 11).

In Yellow and White Brushstrokes, Lichtenstein takes the signature of Abstract Expressionism-the bravura brushstroke-and frames it within the Pop idiom. The spontaneous and layered brushwork of action painting reappears in the Brushstroke series as bold but controlled strokes, replete with drips, set against a field of regularized BenDay-dots.

Lichtenstein's uninflected and restrained rendering of the brushstroke belie their technical complexity and meticulous handwork. Formulating the brushstroke-the fundamental building block of artistic practice-was no easier for Lichtenstein than it was for his predecessors. Bernice Rose recalls:

"He found the brushstroke difficult to create, in fact he found he could not draw it at all, at first. He thought of brushstrokes as wide lines; evidently, it was difficult to draw a description of a line - to describe a line with a line. He finally discovered that if he painted an actual brushstroke as a small study with ink or Magna on acetate, the acetate would repel the wet medium, forcing it to "crawl" back on its own contours, so that it looked like an imitation of itself. Projecting the study onto canvas enabled him to draw an outline around the brushstroke, creating it as a distinct formal unit, stylized as a cartoon." (cited in cited in M. Lobel, Image Duplicator: Roy Lichtenstein and the Emergence of Pop Art, New Haven, 2002, pp. 160-161).

Although the Brushstroke paintings were informed by Abstract Expressionism, their sources are more varied. Like Lichtenstein's more familiar works, the starting point was a comic strip. One of the artist's first Brushstroke paintings was a direct reprisal of a panel from the comic strip "The Painting" a horror story from Charlton Comics' Strange Suspense Stories, no. 72 (October 1964). Here, the cartoonist indicates paint in two overlapping strokes of paint; it is from this comic strip image that Lichtenstein developed the visual vocabulary for his Brushstroke series and roots them in the iconography of his earlier paintings.

Lichtenstein also acknowledged a debt to the painterly school of Renaissance art in inspiring his Brushstroke paintings. The extravagant and exaggerated brushwork of seventeenth-century artists, in particular those of the Dutch portraitist Frans Hals, are precursors to the assertive brushstrokes of action painting. In the works of both Hals and the Abstract Expressionists, the spontaneous gesture appears to be an end in of itself. It is from this richness of sources that Lichtenstein culls his inspiration for Yellow and White Brushstrokes and canonizes it alongside his comic strip paintings.

The comic strip provided the visual reference, but not the format, for Lichtenstein's Brushstroke paintings, thus freeing him from the predetermined configuration of his earlier works. In contrast to the comic strip paintings, the Brushstroke series vary in size, color, and composition from the original inspiration. In Yellow and White Brushstrokes, the looping bands of color and stylized drips call to mind the gestural work of Jackson Pollock. By enlargening and centering the brushstroke, Lichtenstein acknowledges the authority of the brushstroke in the history of art.

Yellow and White Brushstrokes was exhibited in the "Roy Lichtenstein-Brushstrokes & Ceramics" show at Leo Castelli in November 1965. The majority of the twelve paintings in this series are in museum collections.

On occasion, Christie's has a direct financial interest in lots consigned for sale which may include guaranteeing a minimum price or making an advance to the consignor that is secured solely by consigned property. This is such a lot. This indicates both in cases where Christie's holds the financial interest on its own, and in cases where Christie's has financed all or a part of such interest through a third party. Such third parties generally benefit financially if a guaranteed lot is sold successfully and may incur a loss if the sale is not successful.