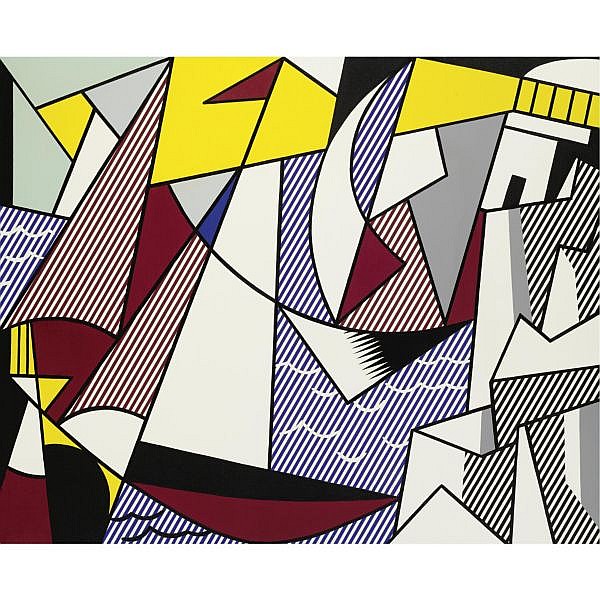 PROPERTY FROM A PRIVATE COLLECTOR
Roy Lichtenstein's artistic career was marked by an unprecedented ability to unlock the beauty from the pictorial conventions of ubiquitous, everyday images. In the 1960s, Lichtenstein garnered fame for his adaptations of comics, advertising and other forms of 'low' art, placing them into the 'high' art context of the gallery and museum. These paintings reproduce the language of reproductions. With bold lines and vivid color Lichtenstein created a unique style which was the beginning of his ultimate subject: art about art. Avant-garde and Modernist movements earlier in the century had decried traditional genres such as nudes, landscapes and narrative painting. Yet as the century progressed, many artists acknowledged that the subject matter of figurative and landscape art never completely disappeared, and the dialectic between the subjects of art and the techniques of art was nowhere more thoroughly explored than in Lichtenstein's oeuvre. Lichtenstein's sailboat series consists of three paintings depicting heavily abstracted sailboats at sea. At the time he was working on this series, Lichtenstein was also painting his Cubist Still Lifes, Abstractions, and Still Lifes. In these four series from the early and mid 1970's, it is clear that Lichtenstein looked for inspiration from the Cubists as well as more traditional nautical paintings that commonly appeared throughout art history. The fractures of Modernist composition are predominant in this period since they have a synergy and compatibility with Lichtenstein's graphic techniques. These works all balance active and disrupted compositions with clear patterns and textures. Speaking about the inspiration for his paintings, the artist stated, "I think the aesthetic influence on me is probably more Cubism than anything. I think even the cartoons themselves are influenced by Cubism, because the hard-edged character which is brought about by the printing creates a kind of cubist look that perhaps wasn't intended." (Anthony d'Offay, Ed., Some Kind of Reality: Roy Lichtenstein interviewed by David Sylvester in 1966 and 1997, London, 1997, p.7) Sailboats, 1974 is the most heavily abstracted of the three paintings on this subject. Lichtenstein creates tension and displacement in the composition by presenting different viewpoints of the same image in one composition. The sailboat in the foreground, rocking among the waves with a red flag at the top of its mast, is the most easily understood rendering of an object in the present work. There are other triangular sail-like shapes in the background but it is difficult to read just how many boats are represented. Some sails are fuller than others, implying speed as the ships careen in the wind. There is extreme motion as the boats seem to rock back and forth in the waves. The sky is also a fragmentary combination of shapes and colors butting up against each other and connecting to what appears to be a rocky coast line in the upper right quadrant of the painting. In Sailboats, the viewer's vantage point jumps from point to point and it is difficult to establish a sense of perspective. Jack Cowart remarks, "the sailboats (Lichtenstein's negative thoughts on Lyonel Feininger)...look like ruler and compass paintings, with their elements of long bisecting lines, arcs, and triangles." (Jack Cowart, Roy Lichtenstein 1970-1980, New York, 1981, p. 78). Although Lichtenstein had a general distaste for Feininger he was clearly looking towards his many cubist representations of sailboats. The theme of the sailboat has been long explored by artists dating back centuries. Thomas Buttersworth and other 19υth century American and British painters frequently turned towards the sailboat as subject matter and nautical scenes of commercial schooners or naval battles were common decorations in many homes. Andy Warhol also explored the sailboat in Do it Yourself (Sailboats), 1962 from his ``paint by number'' series. Lichtenstein depicts the sailboats in his own unmistakable graphic style that provides the painting with its eye-catching individuality while still giving a nod to genre masters before him. The most inventive and intellectual artists knew that the investigation of the past can lead to the most enlightened and liberating innovations of the present. In the mid-late 1970's, Lichtenstein continued to turn to Cubist and abstract subject matter eventually leading to his Futurism series. Lichtenstein brings important artists, including himself, down from their fine art plinths. He displays aesthetic clichés in all their commonly reproduced glory, only to breathe new life into them by placing them lovingly back on the rarefied museum walls. Sailboats is a wonderful work that successfully brings together many of the themes of Lichtenstein's career in a seminal composition of movement, geometry, and color.