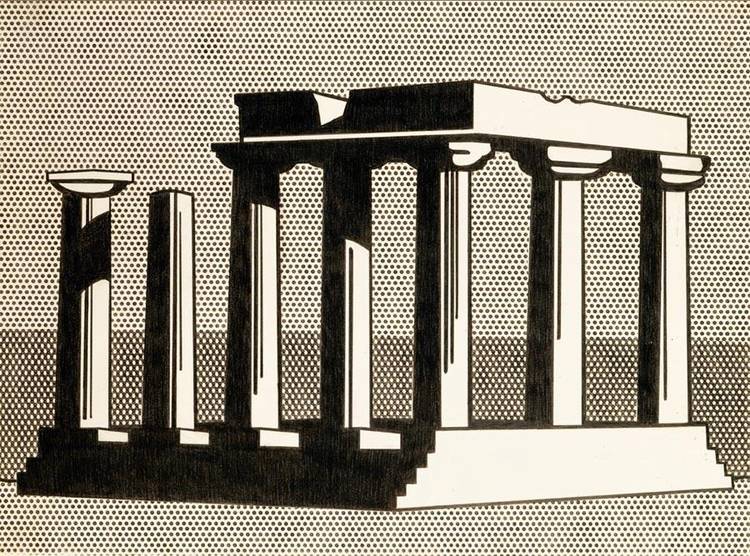 signed and dated 64 on the reverse

pencil and touche on paper

PROPERTY FROM THE COLLECTION OF JEAN-YVES MOCK

Acquired directly from the above by the present owner in 1964

"Lichtenstein's drawings of 1961-69 form a cogent documentation of the development of his style.... They are not intended as preparation for the paintings but as a fresh investigation of the material. His drawings, therefore, form a homogenous entity with his paintings in that they are conceived with an uncommon singleness of purpose." (Diane Waldman, Roy Lichtenstein Drawings and Prints, London 1971, p. 16)

"The drawings are in many ways more revealing of the artist's sensibility than his paintings. The delicate adjustment of subject to form, of curve to rectangle, of a firm black line to the uninflected Ben Day dot... These arrangements are as much a part of the paintings as of his drawings, but the drawings achieve a sense of starkness in the absence of colour and scale that permit other equally important facets of his art to be revealed." (Diane Waldman, Roy Lichtenstein Drawings and Prints, London 1971, p. 21)

Rising up from a shimmering expanse of black and white Ben Day dots, the classical ruins of the Temple of Apollo stand isolated in monumental grandeur against an empty horizon. Devoid of environment and detail, Lichtenstein enhances the graphic clarity of the temple whilst highlighting the incongruity between artistic depiction and reality. Temple of Apollo epitomises Lichtenstein's natural awareness of line and form becoming an exquisite and seemingly effortless essay in the art of illusion. The drama of Lichtenstein's distinctive signature technique is fully realised in the present work, one of his most significant works on paper to ever appear at auction. It is a unique and exceptionally complete drawing for one of his most iconic images; a motif that is synonymous with American Pop Art as well as Lichtenstein's remarkable contribution to visual culture and awareness in the 20th century.

Throughout his long career the artist made very few, finished drawings comparable to Temple of Apollo, and unlike his sketches which are casual in execution, these rare finished drawings are as coherently organised as his celebrated painted oeuvre. The classical perfection of the present work sees Lichtenstein revelling in the dramatic manipulation of space, as the juxtaposed tension of flatness and depth here leads our gaze up the picture plane through fields of sensuous dots to the defiant sculptural plasticity of the temple. In its concrete silhouette, the graphic boldness of the structure stands out with resolute clarity against the mesmerising energy of the background picture plane, becoming the foothold from which we are encouraged to unravel the whole composition.

Lichtenstein's oeuvre famously examined the relationship between art and popular culture, transforming carefully selected images from contemporary magazines and newspapers into monumental icons of high art. As the artist commented, "I want my painting to look as if it had been programmed, I want to hide the record of my hand." (Roy Lichtenstein in Exhibition Catalogue, Pasadena Art Museum, Roy Lichtenstein, 1967, p. 12) Here he adopts a scene from a postcard (Fig. 1). Highlighting the image without text, he gradually dismantles the photographic into a mechanical system of Ben Day dots and line which directly reflect printing techniques. The apparent facility with which Lichtenstein dismantles this aura of greatness, recreating this formidable structure through a minimalist black and white matrix, gradually slows the process of reception. Rather than taking the photograph for granted, we begin to analyze the surface of the drawing for traces of the imperfection of the artist's hand and think about the genalogy of this image, from the temple itself to the photograph to the postcard to the drawing.

A picture's ability to communicate held great fascination for Lichtenstein. His oeuvre is built around a comprehensive exploration of what constitutes a picture for both artist and viewer, explicit in the vocabulary he used and the forms he selected. His artistic language is one of universal, instantaneous appeal: a cool and mechanical aesthetic rendered by graphic precision and compositional clarity. "What Lichtenstein wanted to point out was how important it is for modern man to know the difference between pictures and reality. If we start to identify with all the pictures that are out there trying to convey ideas and impose models, patterns of consumption, concepts of beauty, criteria for success and objects of desire on us, then we lose our grip on reality." (Paul Erik Tøjner in Exhibition Catalogue, Louisiana Museum of Modern Art, Roy Lichtenstein - All About Art, 2003)