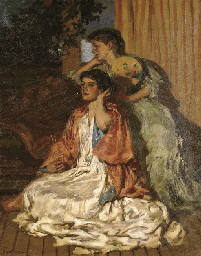 Moonlight Sonata signed 'Rupert W Bunny' (lower left); inscribed 'J. Fisken Lal Lal Est. Yendon' (on top stretcher bar); 'Property of Irene Falkiner/Melb/1924/lent to father and mother' (on middle stretcher bar); stamped '95' (on lower stretcher bar); 'Mrs J. Fisken, Yendan (sic)/Rupert Bunny/pds 100' (on the reverse) oil on canvas 80.5 x 64 cm Painted circa 1907-10 PROVENANCE Mr & Mrs J.F.C. Forsayth, Melbourne Gifted by the above to their daughter Irene Ida about the time of her marriage to Charles Leslie Falkiner in 1924 Thence by descent to their daughter Patricia (Mrs John Fisken) of Lal Lal Estate, Yendon, Victoria about 1950 Sotheby's, Sydney, Fine Australian Paintings and Books, 17 November, 1988, lot 233A Private collection, Sydney EXHIBITION (Probably) Melbourne, Athenaeum Gallery, Days and Nights of August, 24 July - 14 August, 1911 NOTES Mary Eagle has written definitively ( The Art of Rupert Bunny in the National Gallery of Australia, NGA, 1991) on the series of paintings "Nights and Days of August" that engaged the artist in France between 1907 and early 1911. Later in that year, back in Australia, Rupert Bunny exhibited more than a hundred of these summer themed works in a one-man show at the Athenaeum Gallery, Melbourne. This nocturnal image was among them and was purchased there by a collector of Rupert Bunny paintings, the Burns Philp Company's J.F.C. Forsayth. It is thought Mr and Mrs Forsayth gave the painting to their daughter Irene about the time of her marriage to Charles Leslie Falkiner (a nephew of Leigh Sadlier Falkiner of Wanganella Station, Deniliquin, who had commissioned from George Lambert the National Gallery of Australia's painting Weighing the fleece a few years earlier in 1921). Irene Falkiner subsequently gave The Sonata to her daughter Patricia Fisken around 1950. There are in the" Days and Nights of August" series a number of musically titled night- time balcony scenes of languid, elegantly costumed women with various accoutrements of roses, fans, shawls, books etc and in the background a distant sea. The best known and largest of these are the three figured paintings, The distant song, circa 1908 and Nocturne, circa 1908 in the National Gallery of Australia and The sonata, circa 1910 in the Ballarat Fine Art Gallery. Though smaller and with only two figures, the painting The Sonata is, from recollection, the most distinctly moon lit of this series. The sea is silver glitter. The principal figure in all these tableaux is the artist's French wife Jeanne Morel who he had married in London some years earlier in 1902. In fact until after the Great War she is almost a constant in his subject paintings. In this work Jeanne is seated, listening to strands of music, a beautiful self-absorbed figure holding an empty glass and carelessly adjusting her hair. We are grateful to John Jones for providing this catalogue entry and John Jones gratefully acknowledges the assistance of Mary Eagle.