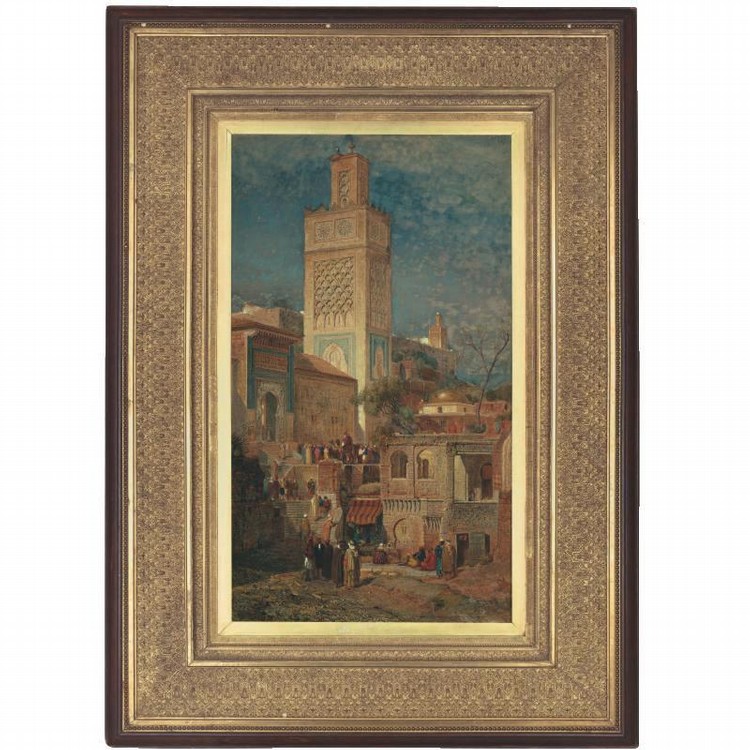 watercolor and gouache on paper

One of the earliest American painters to visit North Africa, Samuel Colman first traveled to Morocco during a trip to Europe in 1860. Accompanied by the artist Robert Swain Gifford, Colman returned to the region in 1871, and then in 1875 he and Gifford made their way to Algiers. In a March 1875 letter Gifford wrote, "Mr. Colman and I have improved the time by constant work out of doors... Next week Mr. Colman and I are going to make an excursion to Tlemcen..."
Holly Edwards, et. al, observes, "The trip that Gifford anticipated may have provided the inspiration for Colman's watercolor, The Morrish Mosque of Sidi Halou, Tlemcin, Algeria. There are two versions of the work, of which this is the more fully realized. [The other version, Arabian Street Scene, is in the Memorial Art Gallery of the University of Rochester. It is considerably smaller (12 x 20 inches) and lacks the details and compositional clarity of the New York Public Library version.] This may well be the painting that graced Colman's easel when a writer from the Boston Daily Evening Transcript visited his Manhattan studio on 3 December 1875. Noting the exotic eastern fabrics decorating the space, the writer commented on the watercolor in progress that depicted a street scene outside the city of Tlemcen. It was certainly highly acclaimed in the 1876 exhibtion of the American Watercolor Society, for its monumentality and masterful manipulation of a medium that was just beginning to gain credibility as a refined mode of artistic expression. This was the exhibition watercolor par excellence....
"The view captured in The Moorish Mosque served as a superb vehicle for displaying watercolor technique. In this work, Colman achieved a masterful balance between mental forms and diverse surface textures, between inanimate buildings and vital human activity. Beautifully cadenced in an unusual vertical format, the image culminates in the stereotypical stork at the top of the tower. The picture retains the limpid delicacy of the medium even as it commands attention as a forceful and finished work of art" (Noble Dreams Wicked Pleasures: Orientalism in America, Princeton, New Jersey, 2000, pp.161-162).